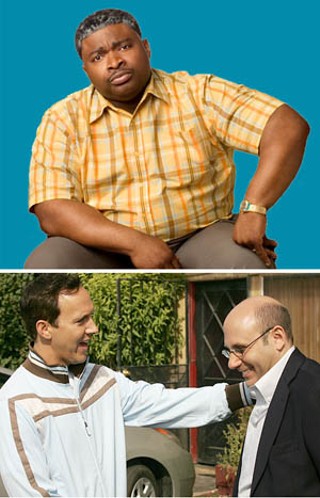 House of Payne (top) and John From Cincinnati try hard to convince us they're better than they are.

It's strange. I had been without TV for a week. Not by design, but by circumstance. I was at one of those round-the-clock conferences, too busy to watch TV, and besides that, there wasn't one in my room. After the third day, I happened to hear one blaring from another part of the building where I was staying. I was startled by not just its familiar sound but by why it was necessary for the person watching the TV to have it on as loud as it was. Would the Court TV show he or she was watching make more sense, be more entertaining, thought-provoking, or interesting? I was also startled by how quickly I became accustomed to functioning without TV. It was easy. But it was just as easy slipping back into it. Except this time, it was strangely foreign and, again, loud. And repetitive. I began to gather my thoughts on the matter.

Things about TV that truly annoy:

Paris Hilton. Why am I supposed to care if she's in or out of jail? Why do I have to see and hear about her over and over and over again? A crowd gathered to watch. I am watching them, wondering who these people are and why they care.

Nancy Grace. Didn't she promise to go off the air? What's taking so long?

I know that TV is a writers' medium, but isn't there any room for silence? Having said that, one of the reasons I like TV is because it's a writers' medium. Is it too much to ask that those words could, once in a while, be brilliant? Or that the spaces in between have some meaning?

Which brings me to shows that work hard to convince you they are better than they are:

House of Payne (TBS): It's a hit! People love it! Tyler Perry is a one-man Hollywood machine. He appears in drag to play an ill-mannered elderly woman with a bad wig and a speech impediment. I suspect this show must be watched loudly in order to hear the humor.

John From Cincinnati (HBO): It's good to give a series a chance to bloom. Yet, I think this is now dead on the vine.

Kyle XY (ABC Family): Like the titular John from above, Kyle is a curious stranger from parts unknown. There is supposed to be something charming about these guileless, fish-out-of-water types. I find them annoying, in the same way I find other people's untended children in restaurants annoying. I don't think they're cute or charming. I just want them to sit down and be quiet. Preferably far, far away from me.

The Starter Wife (USA): Debra Messing (Will & Grace) plays a woman named Molly with friends named Cricket, Lavender, and Joan. In the first and last episode I intend to watch, Molly's child conquers her fear and ventures into the ocean. After a messy divorce, Molly takes "the plunge," as well. We know this when she wades into the ocean with the handsome blond man who has been pursuing her. They stand in tableau. Molly and the blond man kiss. Ocean waves crash around them. The violins swell. As subtle as a wine stain on a white tablecloth. And, yet, it's a hit! People love it!

Now that I've gotten all of that off my chest, on to TV I truly missed:

To the Contrary (PBS): Diverse, thoughtful, and articulate commentary on current issues. The View without the drivel and commercials.

The Daily Show With Jon Stewart (Comedy Central): Master Jon and his court jesters explain it all.

TV worth waiting for:

Saving Grace (TNT): The premiere has been delayed to July 23. Very annoying, because I think this is the most interesting drama to come from TNT. The sublime Holly Hunter stars as a drunk, given a second chance by a divine entity. Yet, this is no Touched by an Angel schlock. It's edgy, complicated, and morally ambiguous. Just like real life.

The Minor Accomplishments of Jackie Woodman (IFC): If you want to know how much I love this series, go to the website where they quote me: www.ifc.com/series?aId=17930. The second season premieres in August.

Eureka (Sci Fi): Thankfully, the wait isn't too long. This quirky series about a secret town of über nerds, dorks, and dweebs living under government surveillance returns for a second season Tuesday at 8pm.

what annoys me, what pleases me