Catherine Parrington and the future of the Austin film industry 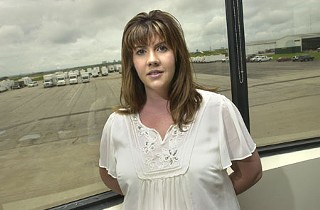 It's fitting that as Catherine Parrington takes over as director of operations for Austin Studios, the hot BBC television mystery series Wire in the Blood is moving onto the lot. In the studios' Red Building, paper signs taped next to doorways mark newly assigned offices for the Texas-shot episode titled "Prayer of the Bone" (both the episode and series titles come from T.S. Eliot poems). Parrington, who spent 13 years with Sony Pictures Entertainment, comes to Austin Studios at a time of major transition, with $5 million in city bonds slated to renovate the studios and the recently approved $20 million statewide film incentives program, from which Wire in the Blood might make history as the first recipient.

Parrington moved up through the ranks at Sony from call-center clerk to manager of production services overseeing 22 buildings with more than 1 million square feet of space. For the Austin Film Society's Austin Studios, she'll be charged with marketing and managing five former airplane hangars turned into sound stages, two of which are to be outfitted with full soundproofing and air conditioning. It will also mark a change in focus from purely big-budget features at Sony to a mix including plenty of independent projects at Austin Studios, where the focus is more on people than the bottom line. "I don't want to make it Sony, because it's not Sony," she says. "I want to make it nouveau-Austin."

Austin Studios is a key element in the future plans of the Austin Film Society, says the group's Executive Director Rebecca Campbell, which she envisions as the "big engine" fueling film industry growth in Central Texas through programs as varied as the Texas Film Hall of Fame and the Texas Filmmakers' Production Fund (which has received a record 218 applications from independent filmmakers this year). She hopes Parrington's hiring, along with other positive signs for the film industry, will pump the society's membership up from the current 2,300 members to 4,000. Since it opened in 2000, Austin Studios has been host to 28 feature films that together are estimated to have dropped $650 million into Austin's economy.

Parrington spent more than a year being courted by Austin Studios after she and her husband decided Los Angeles was not the place they wanted to raise their two children. She responded to a Hollywood Reporter ad, but the film society chose instead to hire from within. When the new studio manager chose to relocate to Houston, Parrington got a second look. "I think the bond money and the incentives will give a new vibe," she says. "I want to get the word out that this is the place to be. My goal is to be a marketer. I want as many people to come here as possible. I see a light at the end of the tunnel, and I'm excited about where that leads us."

For now, she's still finding her bearings in Austin with the help of Adam Tate, who has moved up from intern to the role of Parrington's assistant – she calls him the glue that is holding everything together. Staring out the Red Building windows down at a fleet of crew trucks crowned by the Austin Downtown skyline, she muses that Austin is less like Los Angeles and more like the country of her parents' birth: Ireland. "I associate Ireland with hometowns, where friends and family are what's important. It's like I've gotten a little bit of Ireland here."

Is That a Wrap for Incentives?
Amid economic woes and a race-baiting controversy, the future of TV, video game, and film funding in Texas looks shaky