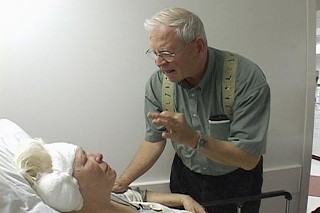 It would be tough to find a personal documentary with more going for it than Irene Taylor Brodsky's Hear and Now. The most skeletal program notes' synopsis would go something like this: "The hearing daughter of deaf parents documents the before and after of their joint decision to undergo, at retirement age, risky cochlear implant surgeries."

As you might suspect, the film that tugged enough heartstrings to snag this year's Sundance Film Festival Documentary Audience Award would have a lot more going on than that 24-word description might suggest. And, of course, it does. For starters, Taylor Brodsky's parents, Paul and Sally Taylor, are the most lovable of subjects. While Helen Keller once opined that given the choice between blindness or deafness, she would have chosen blindness, because while "blindness cuts you off from things, deafness cuts you off from people," we see in the first part of the film how Paul and Sally Taylor disproved Keller's thesis. They speak clearly enough, they sign and are expert lip-readers, and, when we meet them, they're the easygoing, happily married, emotionally demonstrative parents of three adult children – and now grandparents.

Each took their deafness in stride and ran with it admirably: Paul became an engineer and college professor; Sally ("always a chatterbox and probably the only deaf person to be gossip editor of her high school newspaper") a teacher. (One of the best scenes, in 86 minutes of close contenders, is of Sally driving at night, snapping on the car radio and grooving delightedly to the vibration of the blasting heavy metal that she, of course, cannot hear.)

Which is why their decision to undergo the surgeries that will give them hearing after a seemingly contented life without it almost feels like mom and pop's shocking announcement that they're trading the family home for an RV and hitting the road. Taylor Brodsky worries about the move: Will this breakthrough surgery actually work? Afterward, will they be hearing people or deaf people or something in between? As our narrator and guide, she takes us along for her experience of their journey. Through it all, and to her credit, we feel as connected to and protective of Paul and Sally as the filmmaker-daughter herself.

A huge part of what makes this film stand out from others in its genre is Taylor Brodsky's keen eye, both behind the camera and as an editor, for the telling, nonclichéd details – and sounds – that convey the starkly different realities of the deaf and hearing. The film opens with old home-movie footage of Sally singing a way-off-key, practically unintelligible rendition of "Rock-a-Bye Baby," having never heard the actual melody. The filmmaker's sister thinks back to what it must have been like, as a baby, to have parents who are unable to hear your crying and the psychological ripples that may have generated. (Paul had rigged up an elaborate electrical sound-sensor system throughout the house in which any sound – from a baby's cry to the doorbell – would cause lights to start blinking furiously.)

The post-surgery segment is equally compelling, as we follow the emotional roller coaster – the predictables and not-sos – of Paul and Sally's entry into the hearing world, where everyone comes to realize that "hearing" does not automatically happen when a high tech appliance is turned on but requires learning how to listen, something not so easy for a brain accustomed to a lifetime of silence. So, while we watch Paul delightedly going through the car wash twice in one day – just for the sounds – or kicking back on the living room floor with his dancing toddler grandson, gleefully playing air guitar to the music he can now hear, Sally's acclimation is bumpier, and her frustration builds. Increasingly, she flees back into silence, ripping off her earpiece and tearfully exclaiming, "I cannot take it!" A year after surgery, Sally says dejectedly that she'd rather see than hear.

Austin Chronicle: Were your parents willing subjects for your film, or did they take some convincing to go along with having the camera follow them through all of this – including the actual surgery?

Irene Taylor Brodsky: My parents were willing subjects, so that was really never an issue. Their long history with my film and photography endeavors, along with candid personalities, helped with that. We exchanged a number of e-mails before any filming began, discussing how much of a commitment it would be – for all of us. My siblings at times were a little iffy, and I was very sensitive to their reactions. But ultimately, the family was very supportive. They all came to the world premiere with me, in January at Sundance, and stood by me, and the film, the whole way. I am very lucky in that way.

AC: What part of making this film was the most difficult for you?

ITB: The biggest challenge was my own conscience. I never knew how much to keep going – whether in the moment, in other words, how much to push the camera into a particular scene, or filming throughout the year. It's hard enough for a filmmaker to trust her instincts, in today's commercially driven film world, especially; when making a film about one's own family, it's hard to tell if what you're hearing in your head is instinct – or neurosis. The narrative tone of the film – speaking as their daughter, with an intimate and honest eye – was the hardest part to get right. Writing the film was, at times, excruciating. I started out with a lot more narration than I ended up with. After two years of rewriting and paring down my reflections, I came to understand that less – words – is more.

AC: How does a deaf parent teach a hearing baby to speak?

ITB: I think only about one in 10 deaf parents have deaf children. In other words, having hearing kids isn't unusual – even if both parents are themselves congenitally deaf. We learned to speak, I'm told, in a normal fashion. My parents spoke to us all the time; my grandparents lived a block away and were part of our daily lives. My grandfather was a minister, and I remember seeing his public-speaking skills and emulating them. I took articulation pretty seriously – especially because I served as mom and dad's interpreter so often. I didn't want them to be misunderstood.

AC: On balance, do you think your parents are happy that they went ahead with the implants, or did it cause more problems than it was worth?

ITB: You'd have to ask them. But what I hear them tell other people is, yes, they were glad they experienced it. And they still are glad. They progress more each month.