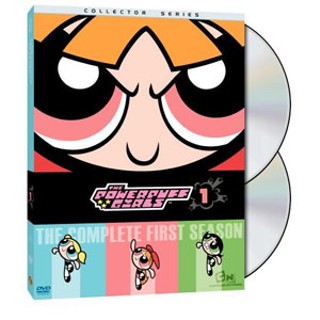 "Sugar. Spice. And everything nice. These were the ingredients chosen to create the perfect little girls. But Professor Utonium accidentally added an extra ingredient to the concoction … Chemical X. Thus the Powerpuff Girls were born."

With those words in 1998, The Powerpuff Girls premiered as part of the Cartoon Network's Friday night lineup. The initial episode earned the highest ratings in the network's history, and over the next six seasons, the Girls grew into a cultural phenomenon, popular with all ages and genders. Following the successes of other complete-season cartoon compilations, The Powerpuff Girls: The Complete First Season finally arrives.

The two-disc set contains the first 13 episodes, which feature the first appearances of most of the Girls' recurring villains: the supersimian Mojo Jojo; monster hillbilly Fuzzy Lumpkins; Him, a devil in drag; the Girls' male counterparts, the Rowdyruff Boys; Sedusa, the evil mistress of disguise; the bumbling Amoeba Boys; and green-skinned hoodlums the Gangreen Gang. The cartoons remain fresh and entertaining, with many clever and memorable scenes. Bits of dialogue resound for days: "She's talking to squirrels again" is just one, and the opening and closing themes lodge within your skull, happily playing over and over.

The extras further enhance the package, especially the inclusion of creator Craig McCracken's original student film "The Whoop*ss Girls: A Sticky Situation," which served as the model for The Powerpuff Girls; two early adventures from the Cartoon Network's World Premiere Toons; McCracken's appearance on Space Ghost Coast to Coast; season one promos; and more. The one flaw is the lack of a commentary track explaining the creative process and production difficulties.