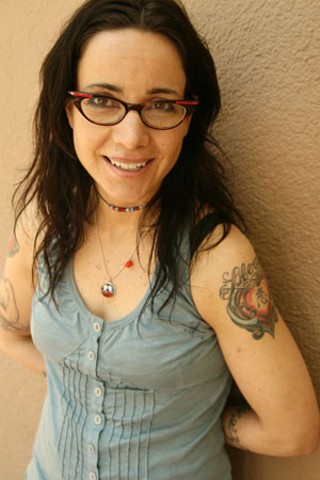 Janeane Garofalo is tiny and fierce, like a righteous and rambunctious kitten, and she's got claws.

Recently in town on a whistle-stop promotional tour supporting Pixar's French chef opus Ratatouille, Garofalo and co-star Patton Oswalt – he voices Remy, the rat who wants to cook (see "Chewing the Rat," below) – also played to a standing-room crowd at Emo's, where "it was a hundred billion degrees, and one woman passed out."

Garofalo talked to the Chronicle about art, food, some spoilers from the film Variety anticipates will be "a gastronomical success worldwide," and why Christopher Hitchens and Ann Coulter are like Anton Ego, Ratatouille's evil critic.

Austin Chronicle: What I took most from the film was the idea that cooking was a metaphor for art. How appreciating food and appreciating art can improve the lives of all sorts of people. It seems to have a very democratic attitude.

Janeane Garofalo: Well, there's definitely "anyone can be a chef," which is obviously a through line of the film, and there's certainly the aspect of the aesthetic levels that Remy shoots for, that [cartoon chef] Gusteau's restaurant shoots for to get its [rating] back. What I took most from the film beyond that – I didn't see that as the central message – was respect for those that are different. Do not react with fear and anger at "the other." Do not try to eradicate the other, and don't rob them of their dignity. You can work much better together than you can apart. The rats were afraid of the humans and had many myths built up about their evil, and the humans were afraid of the rats and had many myths built up about their evil – most of which were untrue on both sides. As they overcame their fear of one another, they focused quite peacefully in order to [create] something better than they would have on their own.

AC: Would it be fair to say that they were able to find common ground through art?

JG: Well, you know, that would be fair to say, but I actually didn't interpret the food as art. And I say that as a person ignorant about the culinary arts. I personally don't know enough about fine dining. You know what I mean? I know the food looked great in this movie, and I was hungry. The Pixar animation of the food looks fantastic. And I know that great cooking is labor-intensive and that people actually have a talent for it. Not everyone can be a five-star chef. It takes passion and time and then that little something extra that you cannot buy or imitate. Remy has it, and Gusteau had it. And then the others were working toward it. Then there was Ego, the critic who just tears it down but learns.

AC: I wanted to ask about the critic in the film, who's played by the excellent Peter O'Toole. What do you think his character tells us about the role of critics?

JG: What I just said. Please refer to the tape. [laughs]

AC: You can tear something down, or you can champion it.

JG: You're not obligated to champion anything. There's nothing wrong with criticizing that which is worthy of the criticism. But if you're only a critic for the sake of being a critic – if you're a professional contrarian like Christopher Hitchens or Dennis Miller, Ann Coulter – you are nothing but a blight on our society. You know? Which obviously she is more than the other two. They're getting there. She and the Fox News douche bags: They're all nothing more than a cultural drag. They literally thwart us from moving forward.

AC: They also foment the fear of the other, such as you describe.

JG: Oh, sure. They are there to throw red meat to the dopes. That's what they do for money. It's almost like it takes a sociopath to do it.

AC: How do we stop them?

JG: If I knew that, I'd be a genius. I would say media reform is in order. You gotta really regulate the media, and you have to go to the FCC [Federal Communications Commission] and say, "These licenses are supposed to be handed out to the public airwaves to serve the public good. They are not supposed to be handed out to destroy society and [reduce] us to anti-intellectual, warlike manimals." They're there to bring out our inner Archie Bunker, though I would say Archie Bunker is far more likable than anybody on Fox.

JG: They are, too! They're fictional comic figures, although they don't know that. And their fan base doesn't know that. At this point it's far more serious than even what we're getting into. They're criminally negligent. They have helped bring us to war. They disinform and foment support for an illegal invasion and occupation of a sovereign nation, which has led to the deaths of hundreds of thousands of people. They literally are responsible for war and homicide. That's a fact. It's conspiracy, it's criminal negligence, it's fraud, and they should have their FCC licenses revoked. That goes for everybody across the board in our cable and network "news." That's what they call themselves. It's state-run media. The military-industrial complex own the stations. So you get a guy like Rupert Murdoch, who's like P.T. Barnum at this point. For whatever reason, we tell ourselves we have a free press. And we tell ourselves we have free elections, but we criticize other countries for having "demonstration" elections.

AC: Semirelatedly, your character, Colette, says at one point that haute cuisine is dominated by "stupid old men who deny women opportunity." How are women disadvantaged in the arts?

JG: I would say women and people of color are particularly disadvantaged in most Anglo systems. The culinary arts are no different from any other system, whether it be middle management at some hotel chain or what have you. I do know, because my very best friend, Mary Beth, is a sous chef, that it's a male-dominated field and always has been, and the culinary training you get in Europe is male-dominated. I think that has a lot to do with the atmosphere of the Gordon Ramsay-like, boot-camp-style yelling and aggression. It's not in the feminine nature to thrive under those conditions.

AC: In that respect the movie suggests that when you see the "other" – whether that's a gender other, or a species other, as with the rats – you should come together in a collective fashion rather than a competitive one, and that approach is ultimately what makes the restaurant successful.

JG: I hope that's true. I will say yes, you're absolutely right. You can be a connoisseur, an adult who's looking for a million meanings from Brad Bird and Brad Lewis, and you will be satisfied.