A Closing Credit for The Alamo at 409 Colorado 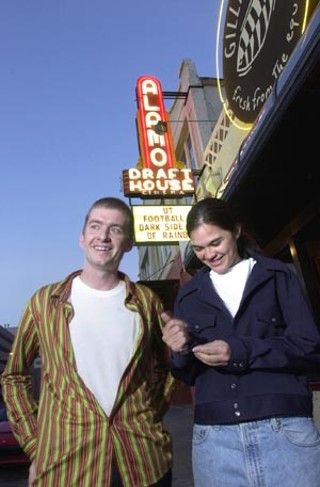 It was the million-to-one shot that turned out to be a trifecta. It was the nexus of regional and then national cinematic cool. It was hot and sweaty, with spindly folding chairs at South by Southwest Film 97 that eventually morphed into real, air-conditioned-theatre seats, 210 of them, before transforming into the really real red-velveteen, cup-holder rows, dimly lit but so much less treacherous than, say, one of Doris Wishman's bad girls gone worse. There was food. There was beer. And there were movies. Oh, Godard, were there movies.

Remember the Alamo? How could you forget? (Well, there was a lot of beer.)

It's difficult now to recall what the cinematic shape of Austin filmgoing was before the original Alamo Drafthouse Cinema, shoved in between a bar and a restaurant – and then another bar and a restaurant – first appeared, dark and ominously cavernous (what was that black goop on the ceiling, anyway?) at 409 Colorado. It's impossible now to believe that there was a time when the 24-frames-per-second former of ex-Californians Tim and Karrie League wasn't as much a part of Austin's cultural landscape as Richard Linklater's Slacker or Robert Rodriguez's El Mariachi. All three are historic totems and touchstones now, but up until Sunday, May 25, 1997, the Alamo was in San Antonio, so far as anyone knew, and cracking open a cold one (much less a bucketful of Rolling Rock) in a picture show was a clandestine operation.

And now, on Wednesday, June 27, the original Alamo Drafthouse Cinema is closing down for several months before being reborn, this September, as the Alamo Drafthouse Cinema at the Ritz on Sixth Street. You couldn't have picked a more sublimely serendipitous exhibition space if you'd blindfolded Francesco Dellamorte, spun him around, and made him stick I Bury the Living's little black pins in a map of Austin. 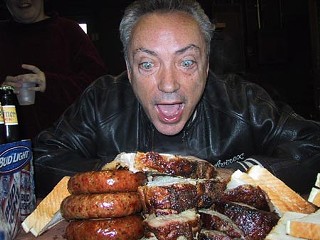 Flesh for Drunkenstein: Udo Kier visits the Salt Lick after an Alamo event in 2002.
Photo courtesy of Alamo Drafthouse Cinema

Tim League ballparks the original Alamo's film screenings somewhere in the vicinity of 3,000, which makes for one helluva lot of fond memories:

"One of my favorite things about this space," says League, "was having the opportunity to meet Doris Wishman. When she came through town, she didn't want to be alone that night – she had a really early flight in the morning – and so I ended up staying up all night with her, which was a really great experience. And then there were people like Dave Friedman, Herschell Gordon Lewis, and Russ Meyer; this space has provided me with the opportunity to meet a lot of my idols in the film world."

And then there was the time actor/icon/BMW shill Udo Kier showed up for a weekend double bill of Flesh for Frankenstein and Blood for Dracula (aka Andy Warhol's Frankenstein/Dracula) and regaled the crowd with tales of on-set hijinks before getting down to the very serious business of consuming the red stuff (vino, that is) to the point of identity annihilation: That Friday night, Kier was Dracula, besotted and Giorgio Armani-ed and tearing off down a crowded Sixth Street in search of "Wirgins!" You had to be there. (And if you weren't, go here: "Fangs for the Memories," December 13, 2002.)

Ten years of the Alamo Drafthouse Cinema. What are the odds?

"I don't know, but I wouldn't have bet on 'em," says League. "Karrie and I had kind of a modest proposal for what we wanted to do, and we were coming off a modest theatre that we did in Bakersfield, California. Honestly? We didn't have any plans beyond this space right here. We didn't know that we were going to expand to the Alamo Village and then expand from there. We were thinking that it would be nice to not have to work every day, have some managers, and be able to take some time off, but this space was what we wanted to do. The Alamo Drafthouse Downtown was our only long-term plan. And it still is how we spend a lot of our time. It's not how we generate our money, but it is very much how we prefer to spend our time."

For admission information on the Last Night at the Alamo, June 27, featuring screenings of Big Night, Earthquake in Sensurround, and Night Warning with Susan Tyrrell live in person, go to www.originalalamo.com.