Rowdy Stovall's 'Mexican Sunrise' was inspired by his real life, whether it be football injuries or run-ins with satanists 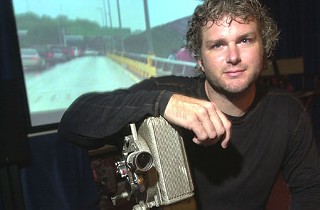 You and a few friends travel to Mexico for some margaritas and dancing. Throwing caution to the wind, you swallow a countless number of cold ones and at the end of the night fall into a deep slumber. When you awake, instead of opening your eyes to the ceiling fan of the cheap motel you and your friends checked into, you see nothing but pitch-blackness, feel nothing but your own breath bouncing back at your face, and hear nothing but the sound of your own screams. That's the opening premise to Rowdy Stovall's new film.

"Most of the stuff in Mexican Sunrise is based on personal experience," Stovall says, "and some near-death experiences that I've had."

Though Stovall claims a certain familiarity with his film's subject matter, the act of making it was something that was previously foreign to him. Mexican Sunrise is Stovall's first full-length feature, and from the few times it's been screened, it's garnered good response: Best Feature Film award from the Breckenridge Festival of Film, Worldfest Independent Film Festival, and the Bare Bones International Film Festival, as well as the audience award at the California Independent Film Festival.

"We've screened seven festivals now, and I thought it was going to go straight to DVD," says Stovall of his debut, shot half in Austin and half in Mexico. "I'm really proud of how well it does in the theatre."

Mexican Sunrise's plot centers on Ryan and the four friends who join him south of the border for his bachelor party. They hit the bars, dance, and lose all sense of responsibility. Ryan's friend Derek has an unpaid drug debt with local Paco, and the bachelor partiers become the collateral. Through the constant flashes to someone trapped in a barrel that's buried underground, it's never clear who has or hasn't been buried alive and who will make it to the next day.

"I wanted to do something nonlinear," Stovall says. "The flashback scenes seemed like a good idea to produce that."

The film's tagline states "based on a true story," and much of the setting, characters, and plot have been lifted from Stovall's past and manifested in some way into the film.

"I have some pretty good stories that I need to tell," he says.

Mexican Sunrise is one of them.

"I lived in Mexico for a year and taught school," Stovall says. "I surfed a lot when I lived there. One day I was surfing at this secluded beach, and there was nobody there, which is a bad idea for surfers. I came upon this wave that was about two heads high. The wave hit me, my head hit the sand, and it just knocked me silly. When I came to, I was underwater and didn't know which way was up or down. It was one of those close calls. By the time I got back to the beach, I just lay there for a while, throwing up water and contemplating what had happened. That might have been where I got the buried-alive idea; I was trying my best to capture what it was like to smell death and be really close to it."

"Before I went to Mexico, I moved to L.A. and tried to be an actor," Stovall says. "I got a few small commercial parts but nothing big, so I had to move back. It was a natural move for me to go to the other side of the camera. That's what the character Wil is based on: a struggling actor who's not getting a break. Maybe he's too insecure and there for the wrong reasons."

Wil wasn't the only character that Stovall re-created from his past. His time spent in Mexico profoundly affected his film writing, in multiple ways.

"When I was in Mexico, there was this family that was really close to me. Derek is based on a friend of mine when I was there. I was friends with him for 15 years or so, and his family, they were very wealthy. I can't reveal their names, because I have to protect my family. Paco is based on his dad."

"[The father] ran a furniture company selling furniture over the border; it was really just a cover-up for importing and exporting illegal drugs. [The son] got talked into joining the business. ... I talked to him and his family at least once a year for 15 years. All of I sudden I couldn't get ahold of any of them for like two years.

"I went back down there to visit, and their furniture business was closed. I knew something was up; everybody did. I ran into some mutual friends that knew them, and they told me what happened. A deal went bad, and [father and son] we're both executed. There was no funeral; that was just the end of the story. It was a very painful experience for me."

Before his residency in Mexico, the near-fatal surfing incident, and the death of his close friend, Stovall grew up in Tomball. Being raised Southern Baptist, Stovall was a promising athlete who played on the high school football team and later at Stephen F. Austin and Texas Tech, before suffering a game-related injury that ended his football career.

"I blew my shoulder out in 1995 at Tech, and that was it," Stovall says. "I committed myself to film after that."

His years growing up in the Houston area with a heavily involved religious family led to his move to California, which, in turn, inspired some of the more macabre parts of Mexican Sunrise.

"I came from a religious Baptist background and a confined religious setting," Stovall says. "I was the middle child that questioned everything about God, good, and evil. I moved to California to run away from all that stuff. I ended up going in the exact opposite direction, and it kind of bounced me back."

"In Santa Barbara, I was opened to all of this stuff you would never find in Houston or Tomball. I got mixed up with a bad crowd. It was a group of about eight people I had met in Santa Barbara; they were a part of the art community there. Basically, I didn't know everything about what they were doing.

"It was 1997 and on my birthday. I was throwing a party at this house. There were a lot of drugs; we were all really pushing the envelope at that time. Around 2am, everyone was leaving except for those eight guys. I had this feeling that everyone knew something that I didn't know, and they were about to show me.

"I went upstairs, and they were all sitting in a circle with burning candles. They told me to sit down, and they started asking me about my religious beliefs. It turns out that they were heavily involved in this really freaky satanic cult, and that night was supposed to be my initiation. They asked me to denounce God, good, evil, and my family. For the next six hours, we argued about religion to the point that we were yelling and screaming until they finally left. Two weeks later, I moved to Mexico."

Stovall's overexposure to the other side sent him back home with a combustible conscious that released itself in his film.

"For the next year and a half, every single night I thought I was going to die. I became an insomniac. I really believed that the devil was chasing me. For me, that's what it was like for [the character] being buried alive, stuck in there with all this evil stuff around him. I was a long way from home and didn't know who to trust. It really threw me for a loop."

As we speak, Stovall is in the middle of filming American Weekend, a documentary of NASCAR. He's sitting on the Kentucky Raceway in Sparta, Ky., watching the cars whiz by. With an ample budget, the aid of cinematographer Lee Daniel, and a roaring audience, the film is coming together like clockwork. It's midday in Kentucky, and the race cars' tires are dissolving rubber by the second; any number of wrong moves could instantly result in a terrible accident, and Stovall's crew is capturing it all on film.

"It's a sport that every single weekend, 2,500 people show up. It's really phenomenal," Stovall says. "The culture of NASCAR is just insane."

But that's what Mexican Sunrise nearly drove him; there's nothing scarier than real life. Stovall believes that going back through those dark times made the plot, characters, and setting more truthful.

"When I first started the story, I went back to the border to relive some of that stuff," he says. "I had to go back and feel it all over again, and it was really painful. As an artist, you have to start searching within to push yourself even further; otherwise, people will see right through it."

Mexican Sunrise will screen on Thursday, June 28, 7:30pm at the Alamo Drafthouse Lake Creek. The event is sponsored by the Austin Film Festival.