No Strangers to Drama 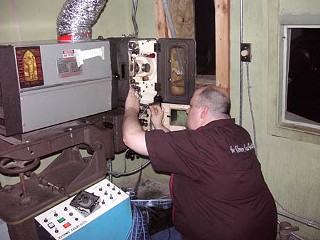 In Albert Brooks' zany Eighties zeitgeist film Lost in America, thirtysomethings David and Linda Howard, as portrayed by the neurotic Brooks and the fey Julie Hagerty, leave their jobs, sell all of their possessions, and set out in a Winnebago in search of their dreams. Maybe author Mark Finn and his wife Cathy Day will someday show it in the old movie house they recently bought after leaving their successful jobs in Austin.

Finn, author of the acclaimed Robert E. Howard biography Blood & Thunder, walked away from his day job as a manager at BookPeople, the largest independent bookstore in Texas. After 12 years, Day gave up her career as an elementary special-education teacher. They agreed that it was time. "We've always wanted to do something like this, and the opportunity presented itself," Finn says.

In late 2006, the couple purchased the legendary Vernon Plaza Theatre, which first opened in 1953. Over the next 50 years and several owners, the movie house, the first theatre in Texas built to show 3-D movies, fell into disrepair and neglect. "The original framework was still there, and the previous owner had upgraded the [film] equipment, so it wasn't all that bad, but it still needs some work," Finn says. "Painting, things like that."

Originally a cavernous 1,000-seat theatre, a previous owner divided the downtown cinema into three separate ones. In February, Finn and Day opened two screens showing first-run movies, to the delight of the locals. Finn detailed the plans. "Once we acquire digital equipment, the third screen will show smaller pics, arthouse films and the like. Also, the space could be used for private screenings and parties. Since this theatre will actually have a working stage, it will be available for dramatic productions."

No strangers to drama, Finn serves as the creative director for the Violet Crown Radio Players, an Austin-based old-time radio re-creation troupe, while Day performs in many of the productions. Finn again: "We saw the opening of the Plaza as just another VCRP play, although on a much larger scale. Definitely a 24/7 operation."

In recent years, the city has fallen on hard times, both culturally and economically. Locals often find themselves saying, "You have to go to Wichita Falls for that." Working with other businesses, the couple hopes to reverse the trend. Active within the community, Finn and Day attend regular civic leader community meetings, where they share their experiences and ideas for the future. According to Finn, they would like "to show the community the importance of shopping and staying in Vernon, to make the city a viable entertainment and economic destination."