The game development programs at DeVry and ACC face off 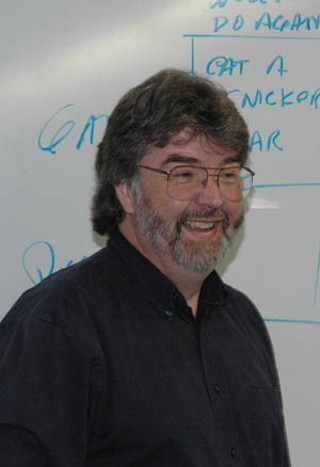 The Personal vs. Professional: In Hawaiian shirt and sandles, ACC's Bob McGoldrick (above) gets his hands dirty, while DeVry's John Jamison (below) offers the skills to pay the bills.

Austin's gaming industry was once a horizon rich with game-developing studios and studios only, but that horizon is changing. As Austin's studio supply topples the graphs, the demand for qualified game developers increases but has been left unquenched. This imbalance in the business of local video games is slowly provoking the rise of game-developing schools.

Consider the number of game companies in Austin. NCsoft, Edge of Reality, Orbis Games LLC, Midway Studios, and more than 50 others have found their niches in A-town, making our city a beacon for game developers and the like. Booming industry brings more business, and now that these companies are scrambling to find designers and programmers to build their games, more are moving to Austin, searching for jobs, yearning to harvest the cash crop that Richard Garriott and Rob Cohen planted so many years ago.

While one machine sows, another reaps.

"Austin is awesome for the gaming industry," says John Jamison, director of the Game & Simulation Programming Department at DeVry University.

Jamison's declaration is why DeVry has decided to erect a Game & Simulation Programming department at their Austin campus. To get their companies started, the 50-some companies mentioned above need qualified individuals to build their dreams, but until DeVry shows up, our city offers very little in this education field. Not even our beloved UT offers such a degree.

"It's different from other degrees in that it's more than just a certificate," Jamison says. "There are a lot of schools out there that offer associate's degrees and such, but we offer a full bachelor's degree, which as far as we know, no one else in Austin does. And it's possible to finish this degree in 31/2 years."

The program, which is set to open in July, is DeVry's novel step into game-building education. In this field there's a fine line between design and programming, and DeVry, being a technology-focused institute, decided to shy away from the art half and focus on the programming.

"We don't focus on design or development," Jamison concedes. "Game programming is the second-highest-paid salary in the industry; we want to focus exclusively on that for this degree. There's critical need for really good programmers, and that's not the focus for other educational programs."

DeVry's venture into the world of educating game developers is not Austin's first. Just a few miles south of DeVry is the Austin Community College Highland Business Center, which has been offering a Video Game Development program for the past three years. Though ACC's intentions are similar, their departmental preferences slightly differ.

"It's more than a game-programming specialization," says Bob McGoldrick, coordinator of ACC's game-development program. "We focus on the art and design of game developing as well as the program."

ACC's program comprises 13 courses over 21/2 years. Though the timetable is a year shorter than DeVry's, it's also not a bachelor's or an associate's; it's a certification.

"This is a noncredit program," McGoldrick admits. "We're working on getting two associate degrees, one in design and one in programming, but we don't have them yet."

McGoldrick believes that as a game developer, you need to have all the bases covered no matter what the exact title and function.

"It's all one business. Even though some of the graduates are going to be programmers, they have to have a greater vision of what the whole industry encompasses. Everybody has to take a design course, an art course, and a business course. It's important to understand how those relationships work, so they can do their jobs effectively," McGoldrick says.

"We don't want to focus on design. Why spend time in the classroom learning design techniques when your degree is in programming?" Jamison asks. "We offer just enough designing studies so that the programmer can work with the designers, but you'll spend 95 percent of the course working on programming."

Instead of a programming-only degree, McCormick's certification offers an emphasis in the student's desired field of study. Six courses in either programming, art, design, or production are required for each student in order to specialize their certification.

Another aspect that separates the two schools is the concept of online courses. DeVry's program is set up so a student can take classes online to earn the degree. Jamison believes it to be an efficient education process.

"Today, you can do teamwork online," Jamison says. "The industry is being done at a distance anyway, so we make sure that the online students feel just as comfortable as the classroom students. It will be different from traditional college, but tradition is changing."

"Studio comes first for our instructors, which makes it difficult in building an online course," McGoldrick says. "The beauty is that these students will work in a close environment with someone from the industry. I don't think you can get that online."

ACC's and DeVry's contrasting viewpoints may make them appear to be bitter rivals in the gamer's education plan, but neither fears the other's enrollment numbers. In fact, McGoldrick's and Jamison's companies have been in talks of forming a loosely based partnership.

"We're speaking with DeVry about our students articulating into the DeVry program," McGoldrick says. "I'm very keen on this program leading into a bachelor's. This town needs a solid education base for the industry; we're designing a pipeline to the industry from a smaller to a larger education company."

Though DeVry is a national institute, offers an accredited degree, and claims to have the best technology available to its students, it's still three years behind ACC in Austin's newest business venture of video-game-building educations.

"What we're hoping will happen is that we'll have a partnership with ACC and UT," Jamison says. "There are many instances where a student can get a two-year degree from another institute and transfer here for a full bachelor's. I envision that instead of competing for students we'll be sharing them."

For more info on ACC's program see www.austincc.edu/techcert/Video_Games.html or go to their information session on Aug. 1. Info on DeVry's program can be found at www.devry.edu/programs/game_and_simulation_programming/about.jsp.