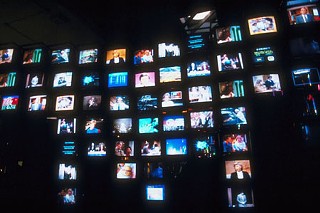 For last week's Entertainment Weekly, Jeff Jensen wrote an article titled "Are You Killing TV?" Accompanying it is a kinetic illustration by Gary Taxali, with an anthropomorphic TV set getting the boot by a disembodied leg. Remote controls flail; the expression on the TV's "face" is anguished, its rabbit ears quivering. The article explains that "how you watch TV is changing and your favorite TV shows are hurting." There are other factors listed: the early advent of daylight-saving time, series hiatuses, and a brief and not nearly exhaustive examination of how the Nielsen ratings work (or don't work, if you listen to a very loud chorus of Nielsen haters). All in all, the article fell on the side of the networks and their challenges in the face of changing viewer habits.

I half expected the article to close with a how-to on saving TV by strapping yourself to a recliner in front of a TV and propping your eyes open with toothpicks. Thankfully, Jensen closes by writing, "[It] looks like Hiro (of Heroes) and company are not the only ones evolving."

Well said. Perhaps that would have been the best place to start the article. For as well-written as Jensen's piece was, it seemed to gloss over the obvious: Audiences have more power than they have ever had in the past, perhaps since the advent of TV. That is a good thing. If our viewing habits are "killing" certain TV shows, it's not because we're bad fans; it's because TV is failing its fans.

It seems to me that the only ones surprised that a seven-week hiatus in the middle of a serialized drama might create a ratings dip were TV execs (some even suggested that viewers had lost interest in the serialized drama ... those darn, fickle viewers). Personally, I was champing at the bit for Heroes to return. But I'm in the minority. I'm also in the minority when it comes to this: Stop bowing to the Nielsen ratings. Now, I know the official line is that the numbers must be gathered in a sufficient quantity in order to convince advertisers to buy time. But here's a thought: Instead of buying in bulk, why not buy into longevity? Stop searching for the next American Idol, and stop giving up on a series when it doesn't post American Idol numbers. Viewers aren't fickle. We're just more fragmented, and I would say we always have been.

Viewers might now rule, but content is king. TV is a delivery system, but it's not the only one. Viewers will go where their interests are being met.

David Milch's (Deadwood) John From Cincinnati comes to the small screen after months of buzz. This tenaciously quirky drama, set in a beach town on the California-Mexico border, centers on a family of championship surfers. Mitch Yost (Bruce Greenwood), the grandfather of the clan, had his career cut short following a surfing accident. He thought his son Butchie (Brian Van Holt) would take on the mantle, but he lost his way through drugs and booze. Thirteen-year-old Shaun Yost (Greyson Fletcher) promises to surpass his father and grandfather's skills, a fact not lost on his determined grandmother Cissy (Rebecca De Mornay) or Linc (Luke Perry), a sponsor hoping to sign the talented young man into his stable of moneymaking surfers. But Mitch won't have it, convinced the boy's life would be squashed by the spoils of commercial success.

Into this backdrop of conflicting wills enters a strange man (Austin Nichols). Everywhere he goes, peculiar things happen. Is he an angel, a being from another planet, or just a little weird?

John From Cincinnati premieres on Sunday at 9pm on HBO.

Big Love returns for its second season Monday night at 8pm on HBO... The fourth season of City of Men returns Wednesday at 8pm on the Sundance Channel... Also returning Wednesday is Rescue Me at 9pm on FX.

In case you hadn't heard, the final episode (ever) of The Sopranos airs Sunday at 8pm on HBO.

Local filmmaker Paul Stekler's Special Session ends Sunday with a "best of" reel, featuring "An Anthropology of the Lege," written and narrated by InThePinkTexas.com's Eileen Smith. Special Session airs Sunday at 11am on KLRU. A roundup of Stekler's favorite episodes are available online at www.klru.org/specialsession.