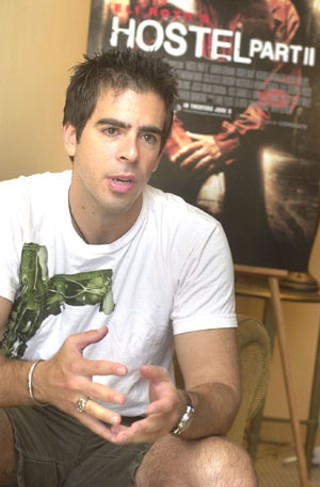 Few filmmakers make appearances at midnight sneak previews of their upcoming films. Even fewer let a dominatrix trio whip them senselessly in front of their fans right before the screening begins. That's what separates Hostel: Part II writer/director Eli Roth from others of his ilk: He's willing to go the extra mile to please his audience through acts of pain. Hostel: Part II, Roth's latest dive into the world of bloodshed and horror, is no less shocking than watching the maker of the macabre endure several whip lashings and beatings with cooking trays from a black-leather-clad S&M gang at the Alamo Drafthouse Downtown. The next morning, after signing posters all night and now functioning on minimal sleep (not to mention recovering from his wounds), Roth allowed us to crack open his skull and pick his brain.

Austin Chronicle: How was getting whipped on stage at the Alamo last night?

AC: Of the three films you've made, the main characters are college kids on vacation. Why do you always pick that as your theme?

ER: I like that, because you're at that age when you think you're an adult but you still hold on to that adolescent behavior. At 20 or 21 years old, people still do stupid things; you still act like a teenager. They go look for fun, adventure, and excitement but get more than they can handle. It's a fertile ground for horror.

AC: You used to have a skin condition where your skin flaked off, and that was your inspiration for Cabin Fever. What personal experiences can you attribute to the Hostel series?

ER: It came from several different things, one from my experience with traveling. Also, from this Web site that Harry Knowles found, where you could go to Thailand, and for $10,000, you could walk into a room and shoot someone in the head. Harry and I talked for hours about it; we looked at it and thought, "Is this real?" Then we thought that it doesn't matter if it's real or not: Somebody actually conceptualized it. There's something in our genetic makeup that causes people to behave this way. All of a sudden you see what it's like to be in a room where someone is going to cut your head off, and nothing you can say or any amount of money is going to stop them. In Part II, I wanted to further explore the psychology of the people that were going to do this, but I wanted to make them guys that everybody knows. That's what would make it much more terrifying for people.

AC: Hostel was based more on gore and horror, where Part II has a more developed plot and deeper characters. Does this mean that your filmmaking style is moving more toward plot and character basis rather than blood and guts?

ER: There's a very clear tonal shift in part one. I couldn't just do a tonal switch again for Part II. Now that we know what's going on, we don't have to watch it through the characters' eyes; we can watch it objectively. I knew it would be a huge risk to leave the main characters for 10 minutes at a time and view these other guys and sympathize with them.

AC: Why did you decide to switch the main characters from all males to all females?

ER: Every time you make a sequel, you have to up the stakes. Immediately when you say girls are going there, it becomes much more horrific. With the girls, I shot it in a very operatic, stylized way, specifically because I know how difficult it is to watch. I wanted to still keep people engaged in the story and not feel like they're being punched in the stomach. It's like the difference between hunting a lion and hunting a deer. When someone shoots a deer, people think, "Aw, that poor deer; what did it ever do to deserve that?"