A City in Fits and Starts 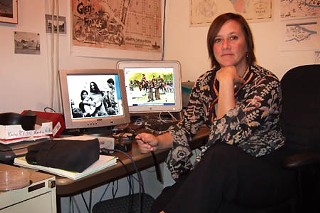 Undoubtedly, some longtime residents of our fair city will watch Austin Time Tours as I did, with a mixture of riveted fascination and private, self-reproving embarrassment: How is it possible to have lived here for so long and know so little about Austin's history? Of course, we're talking about a time span of some 300 million years, but still.

UT Department of Radio-Television-Film lecturer Karen Kocher has given us a huge gift: She led an expedition through the city's assorted and far-flung archives – including a previously unmined cache of motion-picture footage found stacked in KTBC/Fox's basement – and re-created Austin's story (Austin Past and Present) in a multimedia format that is now easily accessible in places like libraries, school servers, kiosks, and KLRU. Austin Time Tours has been compiled from that larger, interactive digital project.

Austin Time Tours moves on the timeline of Austin's almost biblical past, from the settling of the original nomadic people following buffalo and deer along the Colorado River to the fits and starts – the fires (the rebuilding), the floods (the dams), the political battles, the devastations (the ensuing PR rehabilitations), the oil (!), the beneficence of LBJ – that took place along the way to permanent state capital-hood. Not to mention our recurring appearance, these days, on so many "most liveable city" short lists. There are some disconnects here, too, not least of which is reconciling Travis County's current blue-in-a-red-state credentials with its segregationist past. Pretty jarring to hear Mayor A.P. Wooldridge – of Wooldridge Square fame – dig in his heels and announce that "We will tolerate no idea of social equality" and to watch footage of KKK marches down Congress Avenue; in 1921, there were 1,500 Klan members in Austin. Each time segment documented in Austin Time Tours is a look at how this vibrant place has invariably picked itself up after every setback and reinvented itself overtime. You have to wonder, what's next?

Kocher incubated the idea for her Austin history project for some time. Her interest was piqued back in 1996, when she was working on a Barton Springs interactive project at the Austin History Center and heard tantalizing tell of a "not easily accessible" motion-picture archive at the center. "I really wanted to see those films," Kocher recalls, "but the project I was working on had no budget for archival footage." Fast-forward a few years, and Kocher gained access to those film archives, discovering along the way that priceless cache of hundreds of cans of news outtakes in the basement of KTBC/Fox. In the end, she would draw from more than 160 archival sources for this project.

Austin Chronicle: Talk a bit about your archival eurekas.

Karen Kocher: I would have to say that the pièces de résistance came from those KTBC/Fox and Austin History Center motion-picture archives. At first, when I contacted KTBC, I was told that there was no motion-picture archive, but an older man who worked there years before disagreed, so I kept trying – for a year and a half. Susanne Mason, who produced the 1950 to 1975 segment, which is my favorite, by the way; Charlotte Wood, associate producer; and I turned up at the news station. The archive was kept in the basement. We arrived with our projector. Whitney Milam, the special-projects producer, opened the door to the archive, and we were like kids in a candy store, staring at hundreds of cans of outtakes marked with date and some descriptions like "City Council Meeting." ... It was extremely time-consuming, to say the least, but at the same time exhilarating when we found something. Keep in mind that these were outtakes. No one knows where the actual footage is that was used for broadcast. It's just gone. So we were ecstatic to find Lady Bird Johnson at the dedication of the Town Lake Beautification Project, but just as she started to cut the ribbon, the footage ended, so we had to re-create that moment from what amounted to the garbage. Also, a lot of the film did not have sound, so what you hear is re-created. Luckily, the Lady Bird Johnson speech was filmed with sound.

AC: You enlisted a lot of Austin talent – historians, curators, musicians, and writers. And there are 27 Austinites in the voice-talent credits, from Karen Kuykendall and Ann Richards to Neal Spelce and Mayor Will Wynn, with Hector Galán as the main narrator.

KK: When I asked Hector, he gave me a qualified yes, reminding me that he was "not a professional narrator, and, you know, English was not my first language." In spite of these "shortcomings," I think he did a really nice job, and I like that his voice is not the traditional documentary male narrator voice. Hector has a particular kind of regional accent that I was happy to be able to showcase.