A Life of His Own

Diving right in with Tab Hunter 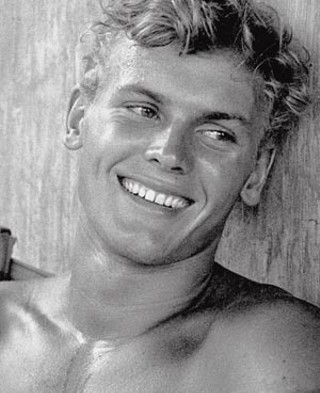 He was blond, tan, and fit like he meant it. He looked equally at home astride a stallion or riding the wild surf, firing an M-1 carbine in the cordite haze of a back-lot Guadalcanal hell or doing Tennessee Williams so well he delighted the playwright. He had his own television show. He was a Damn Yankee.

On Feb. 16, 1957, he knocked Elvis Presley off the top of the charts backed by the King's own Jordanaires. He lunched with Luchino Visconti. He dug John Waters before you did. He dated Natalie Wood. Your mom had a crush on him. He dated Anthony Perkins. Maybe your dad did, too. He made out with Divine.

He is not now, nor ever was, Troy Donahue. He has never been anyone but who he is today. He is Tab Hunter, the sigh guy, the fresh-scrubbed teen-beat dreamboat, once closeted in a studio-mandated straitjacket, now the author of a bestselling autobiography. And he's coming to the Alamo Drafthouse Downtown to tell it like it is, was, will be. And, oh yes, there will be Polyester ...

Austin Chronicle: So what can we expect from the live version of Tab Hunter Confidential that you're doing at the Alamo Drafthouse? Your pal John Waters was here a few years ago touring with a similar career-spanning one-man show. Can we assume it will be something along those lines?

Tab Hunter: My friend Eddie Muller, who wrote the book with me, is going to come along, and we'll be screening clips from my work with me talking and so on. And then they'll show Polyester, the film I did with John and Divine, who, by the way, I to this day call my favorite leading lady. That whole experience was so much fun, and the film itself holds up pretty well. I watched it not long ago, and it's still very fresh.

AC: One of the remarkable aspects of your career in film is that you got into Hollywood right at the tail end of the studio system, under contract from Jack Warner, and then continued acting after the decline and fall of the Hollywood old guard. Looking back, did you prefer the studio days over what followed in their wake?

TH: It was a strange time, because the studios weren't really sure what to do. They had to get rid of all their theatres around the country, their audiences were changing, television was coming in a big way, and films just weren't making the money they'd been generating in the past. So, what the studios would do, even though you were under contract – and Natalie Wood and I were almost literally the very last people put under contract at Warner Brothers – they would loan you out to different studios for other projects, which in my case, allowed me to do television back when it was still live, things like "Portrait of a Murder" on Playhouse 90, which was directed by Arthur Penn and for which I was nominated for an Emmy. It was a very exciting time.

AC: Was it recognized at the time as the end of an era?

TH: Not really, but you could sense that it just wasn't the business it was before, and of course, these days it's the large corporations that own the studios, and it's all about those above-the-line megafilms that are, you know, pretty boring. The great thing about the studio system is that they ground out a lot of films, and you had a wonderful chance to hone your craft while working with some of the most incredible, talented, and famous people in the business.

AC: As an admitted film fan, do you keep up on Hollywood's current output? Do you still go out to the movies, and if so, what's your take on the contemporary filmgoing experience?

TH: I don't think much of the current Hollywood system, actually, but I do like the independents, and I always have. It was the French and the Italians, the Truffauts and the Antonionis, that first shook things up in the Fifties and Sixties and that had the effect of making the studios sit up and take notice and eventually change their ways. Audiences at the time were hungry to see real people in real situations and not so much the la-di-da stuff that Hollywood was releasing. I respect and take my hat off to independent filmmakers. Just the other night I happened to see [director John Curran's] The Painted Veil, and I thought that was just really good stuff.

AC: When you mention the name Tab Hunter, it conjures a very specific image and a certain almost archetype of filmmaking and acting. Did you have a set methodology that you brought to your roles, or is this image so many people have of you more a product of the studio's marketing or PR division?

TH: I don't think I'd call it a style of acting; it was more a case of just doing what came naturally. I'd do my research and then just dive in and try to give the character a life of his own. As for preconceived notions of me, I could care less. I'm not on this Earth to win a popularity contest; I'm here to do the best job I can. I remember talking to Geraldine Page – whom I consider to be the finest actress I ever worked with – and saying, "Gerry, everyone loves your work, but the critics hate my guts," and she told me, "If people don't like you, that's their bad taste." And I've applied that attitude to my entire life. For every actor doing their job that you see, there are a hundred others that can do it as well if not better.

AC: You've worked with everyone from Jacques Tourneur [War-Gods of the Deep] and Antonio Margheriti [The Golden Arrow] to William Wellman [Track of the Cat, Lafayette Escadrille] and John Waters [Polyester], which is pretty much the broadest spectrum of auteurism one can imagine.

TH: That's true. They all have their own stylistic differences and preferences, but even from a blood 'n' guts director like Raoul Walsh [Battle Cry], you learn and grow as an actor, even if it's just learning what not to do next time.

AC: What did you learn from Wellman? To this day he's still known for the on- and off-set hubris that earned him the nickname "Wild Bill."

TH: Wellman had a great enthusiasm that I loved, and when you were on set, you picked up on that enthusiasm; Bill was right there, all the time. He was such an integral part of his films, a director who really shot from the gut, and he taught me to follow my own instincts and to always be truthful to myself.

AC: On the other end of the spectrum, what did you learn from John Waters?

TH: Well, obviously John gave you a lot more freedom than Bill Wellman. [Polyester] was the kind of project where John allowed people to do as they felt, much more so than Bill, who had a very preconceived notion of what he wanted in a scene. John would just kind of plant an idea and then let you run with it. John is ... like your friendly undertaker, and he's fabulous to work for.

AC: Polyester was the film that reignited your film career, yes? Were you aware of John Waters previous to that? He was still pretty underground at that point.

TH: I was up in Indianapolis, and John called me about doing the film. He said, "You may not know of me," and I told him, "Of course I do! I'm a big fan of yours!" I'd heard of him via word of mouth, and I'd seen Pink Flamingos and Mondo Trasho, and at the time I couldn't get arrested in Hollywood, so I said, sure, send me the script. And then he asked me the big question, which was, "How would you feel about kissing a 300-pound transvestite?" and I said, "Well, I'm sure I've kissed a hell of a lot worse in my life!"

AC: You notably starred in one of the many "beach movie" pictures of the Sixties, 1964's Ride the Wild Surf, with Fabian, Barbara Eden, and Robert Mitchum's son James. That's one of the few film genres that's never really returned in any major way, although the originals are still wildly entertaining time capsules of that sort of post-Cuban Missile Crisis/JFK assassination, escapist-entertainment era. Can you comment on both that film and the enduring popularity of the genre as a whole?

TB: At that point I was already a little long in the tooth, but I needed to work, and I accepted the role. They dyed my hair brown, and, being in Hawaii, it bleached out to orange after three days in the sun. I wasn't crazy about it, and it wasn't a great script, but I was just grateful to be working. I think a lot of those beach movies were pretty thin films in terms of story.

AC: What's Tab Hunter up to these days? Are you out of the acting game entirely?

TH: Right now I have a young horse that I bred, and I just shipped her to New Mexico to start her show career. I'm actually on my way there tomorrow. These days, I spend most of my time on that, although we have had a meeting about turning my book into a film.

Co-presented by the Austin Film Society and BookPeople