Meet ME TV's Paul Saucido, if you haven't already 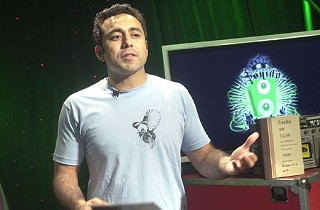 It's fitting that Paul Saucido's favorite holiday is Día de los Muertos. The two-day festival celebrating life and conceding the certainty of death also reminds us that when something dies, something new inevitably springs from the remains. Still, when Saucido was told he was too old to host LATV Live, the eclectic music show targeting bilingual audiences, the then-33-year-old was thrown. Thrown hard. So, when friend and Austin music promoter Alicia Zertuche offered Saucido a place to crash during the Austin City Limits Festival, he accepted.

The chance to hang out in Austin was a welcome respite. But he never suspected it was where he would make his next career move. And if Austin's Latino musicians and music lovers have their way, Saucido's current gig hosting Music & Entertainment Television's Sonido Boombox will be a lifetime appointment. Since joining ME TV, he's earned praise for his swift and proactive impact on Austin's Latino music scene.

Born in Phoenix and raised in L.A., Saucido attended California State University-L.A., where he was a theatre and Chicano studies major. He developed his stage presence doing college plays, later performing with the Chicano Secret Service in Latin's Anonymous, and produced and performed in Latinologues (which had a brief, off-Broadway run). His play, The Furthest Room, was produced at the Stella Adler Theatre in 1999, starring Chicana rocker Lysa Flores, who also wrote the show's original music. But when a friend gave Saucido a mixtape with a then-burgeoning sound called rock en español, Saucido found himself hungry for more. He hit venues, like Sean Carillo's Troy Cafe, booking rockera and alt-rock acts (Carillo is otherwise known as Beck's stepdad).

Soon, he was covering the rockera scene for L.A. Weekly and other publications and eventually pooled all his skills – writing, performing, and harnessing his rockera knowledge – as an on-air host on LATV Live. The gig lasted five years.

Fast-forward to 2005. After he arrived in Austin, Zertuche told him about a soon-to-launch TV network called ME TV, which was taking over the old Austin Music Network slot.

"From the start, I loved the idea of having the chance to do things right, from the beginning."

Sonido Boombox (Monday through Friday at 2pm on Time Warner Cable Channel 15 and digital Channel 577) is the only bilingual music-video show in Texas that features the entire range of Latino music – pop, alt-rock, reggaeton, Mexican regional, punk, ska, and more. In addition to music videos, Saucido interviews various Latino artists, writers, and musicians in studio, on location at events like the Cine las Americas opening, and backstage. Two years later, Saucido is now the Latin music director of ME TV and is widely considered the go-to guy for Latino music in Austin.

"From day one, Paul was open to listening to or talking with any band I introduced him to," says Alba Peña, co-founder of Conexion Rockera, talent buyer for Ruta Maya Riverwalk in San Antonio, and an early Maneja Beto manager. "He was all about learning as much as possible about Austin's music scenes and has developed into one of its most loyal supporters."

According to a growing chorus, Austin's Latino music scene can use all the support it can get.

"I think here in Texas, you're dealing with old stereotypes about what Latin music should be and sound like," Saucido says. "The mainstream [press] has ignored the diversity of Latino music."

"We needed [Sonido Boombox] in Austin," says Rose Reyes, music and film manager for the Austin Convention and Visitors Bureau. "In addition to promoting local acts, he brings in cutting-edge acts from Mexico and L.A. and produces dynamic showcases, spreading the gospel of Austin's diverse and burgeoning Latin scene."

In the meantime, Saucido and his team are putting the finishing touches on Laternativo Showcase 5. The May 26 show features Chetes (Monterrey), the Lemurs (Austin), Arthur Yoria (Houston), and Sexto Sol (San Antonio) at La Zona Rosa. Tickets are $15 and benefit the Austin Public Library. For more information, go to www.metelevision.com.