Chewing Up the Scenery 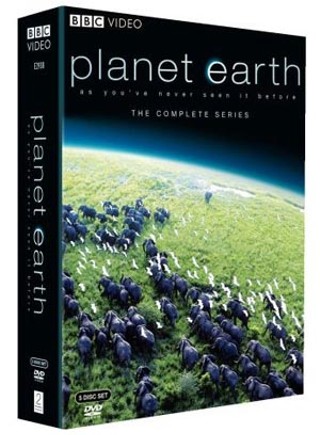 "The inhabitants of this great wilderness may live and die without ever having contact with humanity. Long may it be that way." – Sir David Attenborough narrating the Planet Earth episode "Seasonal Forests"

Attenborough refers to the taiga biome there – the "sheer extent" of trees that grow in its snowy coniferous ring "stuns the imagination," while its elusive, roaming lynx "are like spirits" – but he could say the same thing about the rainforests of Borneo, where a crab spider symbiotically camps at the base of a pitcher plant waiting for gullible ants, or about the Himalayan ranges of Pakistan, where snow leopards hide out acting all mysterious and snow leopardy.

In any case, he'd be only half-right. The polar bear in the high Arctic might never wander into the middle of a snowball fight, either, but most of us have managed to make significant contact with him anyhow: by contributing to the destruction of his habitat from thousands of miles away. In the "Ice Worlds" episode of Planet Earth, we watch from above courtesy of a Cineflex heligimbal and various HD cameras as he crashes to his knees and crawls along melting ice floes before plunging into the sea. Later, at eye level, he's repelled by a herd of walrus in a high-risk, last-ditch effort for food, followed shortly by his starving to death on a bank.

Perhaps because people find polar bears so lovable (again, from a distance), BBC producers decided that this visual was a sufficient statement on global warming – indeed, on anything overtly political – amid underlying notions of stewardship and conservation. Not counting Attenborough's occasional wisecracks and the follow-up miniseries Planet Earth: The Future, it's the lone moment of eco-preaching among 11 hours of spectacular natural history shot over five years in 62 countries on seven continents.

This is admirable. It's as if Alastair Fothergill (he also produced The Blue Planet) and his team were more concerned with showing as opposed to telling, with reminding us of what's really at stake. The science and the scenery embarrass us with their dignity: Quietly, they make it clear how unfair it is that the fate of the world depends on otherwise so inconsequential a species. Set to George Fenton's compositions as performed by the BBC Concert Orchestra, what results works as either the tribute video some extraterrestrials could show at the memorial service or the celebratory highlights on a JumboTron (if not for the excessive energy consumption) should we manage to save the day. It's up to you and me which it becomes.

I came to Planet Earth earlier this year by way of a friend's recommendation to stream the episode "Jungles" on TV Links (www.tv-links.co.uk), preferably stoned if I were to truly appreciate the flying lemurs (which Attenborough patiently explains neither fly nor are lemurs) and the courtship dance of the six-plumed bird of paradise. The British-based TV Links of course carried the original 2006 broadcasts, but I also had the option of watching the series on the Discovery Channel – with Sigourney Weaver narrating in place of Attenborough – as it became the most-watched show on American cable during March and April. Viewers were attracted to the footage that crews had captured with the "time and the resources to try things that people haven't been able to try before," as producer Huw Cordey put it in promoting the DVD release on Fresh Air earlier this week.

Planet Earth: The Complete BBC Series (BBC Warner, $79.98) includes 10-minute "Diaries" on the process and technology behind each episode, as well as The Future, the cautionary talking-head companion documentary that more than makes up for its forebearer's stoicism. The episodes are those featuring Attenborough in the booth, thankfully, and the 80-year-old veteran of Life on Earth, The Living Planet, The Blue Planet, and The Trials of Life nearly outshines the "sinister" glow worms and "vampire squid from hell," the "wild ass" and their "frisky business," the otters and their "group-rubbing," he describes. You shouldn't operate a motor vehicle if you take a sip and/or a hit every time he says "these are not the sort of conditions in which you'd expect to find [insert life of any kind]" and/or the words "unique" and "bizarre" in his godly timbre and grandfatherly enthusiasm.

"Fur seals normally live on krill, but these have now acquired an unexpected taste for blubber-rich penguins," Attenborough tells us during "Shallow Seas," as the former pursues the latter in a clumsy chase across loose rock. Seal might as well have an eye patch and peg leg; penguin, a corset and puffy blouse. Penguin somehow escapes. "Made it!" says Attenborough, a teary pride swelling. In "Deserts": "When resources are limited, conflict is never far away," he says, his voice lowering to an urgent whisper as if he's standing a foot away from the action: "These are Nubian ibices, and they are squaring up for a duel."

And with that, the brutal clash of the ibex horns – over and over the animals collide on a bone-dry African mountainside – something clicks for me while watching "Deserts": One day, this will be us, the unseen human beings behind the camera and those of us on the couch a thousand miles away. We'll be living to survive, nothing more. Maybe it has to be this way, but if we're to maintain a civilization here – and if here will still have us – we had better start picking up litter or something instead of just enjoying the view.