Not Going to Use 'Time Warp' in the Headline ... Oops, Too Late 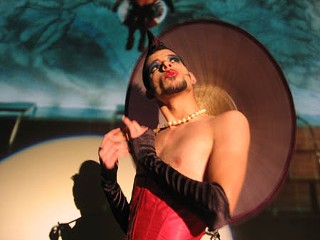 Saturday, May 19, will mark the 31st anniversary of the first Austin cast performance of The Rocky Horror Picture Show. In 1976, Austin became the second U.S. city – after New York – to begin screening the film at midnight.

That was at the old Varsity Theatre (which eventually became the home of Tower Records). Nowadays, the Queerios' Rocky Horror Picture Show cast calls the Alamo Drafthouse Village home, and there has been a midnight screening there every Saturday since Sept. 11, 2004. Before then, screenings were held at the Dobie, the Presidio on Riverside, and elsewhere.

The cast and tech crew, roughly 15 to 20 people overall, is made up entirely of volunteers, people who love The Rocky Horror Picture Show so much that they learn the movie inside and out, memorizing every line, song, gesture, and facial expression of the characters onscreen. Taking things one step further, there are lines shouted in response to characters lines in the film by both cast and audience members in the know.

(To be perfectly frank, this is an aspect of the cast performance experience that is unbearable. It isn't so much that the response lines are "bad" or "silly." The movie itself is bad and silly. That's part of the appeal, part of why The Rocky Horror Picture Show has become a cult classic. No, it's because there is a rather annoying lack of synchronization among many cast members when it comes to yelling the response lines, the result being that it's only audience members who know both the movie and cast response lines – the kid sitting next to us who was a dead ringer for Pedro from Napoleon Dynamite, for instance – who have any idea what's really being said. Still, it is the audience-participation aspect that continues to draw people in, and the dedication of the cast is to be applauded. The only money they make is from the prop bags they sell before each screening.)

"We're not organized enough to be an actual nonprofit organization," says Shawn McHorse, himself a 13-year cast veteran, husband of the cast director, and the group's treasurer. He also runs a Web site, www.rockymusic.org, devoted to the film's music.

"Thirty-one years of anything is impressive," says cast member Kevin Keener of the live cast performance. "I'm proud to be a part of it."

For more information on the Queerios cast and their May 19 midnight event at the Alamo Drafthouse Village, visit www.austinrocky.org.

Notes of a Football Addict (Vol. 1)
Fat men in polyester shorts and more

Allah Is Not Obliged
In Ahmadou Kourouma's fourth and final novel, the 10-year-old narrator is forced into military service in Liberia