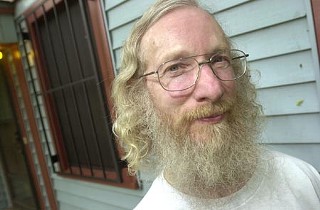 Dan Eggleston likes to count. Consider the 6,363 books he's read so far in this life (275 last year was a record high). Or the 1,319 autographs he's finagled out of celebrities. Don't forget he walked 3,409 miles in 2006. And he's lived in Austin for 31 years, long enough to remember that fabled weirdness and revel in it. But the most important number is 5,497. That's the current membership of AustinFilmCasting, a Yahoo! group he started back in 2000. It's the number that tells you Eggleston counts on the Austin film scene.

If you know Austin film, you've probably already bumped into the wiry guy with the electric shock of hair and silvery cotton-candy beard. He's everywhere and has quietly made his cipher multiply. Consider him a low-key Harry Knowles. Both grabbed onto the Internet and took it on a filmic ride. Knowles, a community-college dropout, rode the Ain't It Cool News wave to become a national voice to be reckoned with. Eggleston parlayed his site into roles in more than 100 mostly ultralow-budget films. Not bad for a guy who not too many years ago was Knowles' middle-school science and computers teacher. He also taught Dazed and Confused actor Wiley Wiggins, whom Eggleston remembers as an outcast whose fingers were broken by the jocks.

How did this mild-mannered teacher and card-carrying Mensa member make the leap to cool scenester? It started on a movie set, naturally, and gives hope to all who dream. Or is that the tagline of Hope Floats, whose Smithville, Texas, set Eggleston visited a decade ago in search of autographs? Instead, he was asked to return as a movie extra and caught the bug. Soon he'd found himself with an actual role in the indie film Pageant and a recurring extra gig on Sandra Bullock starrer Miss Congeniality. Pageant couldn't find extras, and Miss Congeniality had some 200 of them waiting in stultifying boredom in the "excitement" that is the 12-hour moviemaking day. Eggleston passed around a list seeking e-mail addresses. Voilà! An online independent-film resource was born.

"It exceeded my expectations," says Eggleston, who now claims another 7,500 or so members on similar lists since started for Dallas, Houston, South Texas, and Lubbock. "It helped create a network for people wanting to make their independent films and created a larger film community that wouldn't exist otherwise."

And it made Eggleston into the most unlikely of VIPs. His indie roles have included long-haired partygoer, bum, corpse, and, of course, teacher. The key has been persistence, something the former teacher has down to a science. Just ask John Pierson, the famed producer's representative who has had to shoo Eggleston from his doorstep on more than one occasion. Eggleston's latest passion has been the odd indie comedy Z: A Zombie Musical, for which he was promoted by filmmaker John McLean to producer. That has set the persistent Eggleston out on a tear, convincing everyone from a band of former Austin mayors to musicians including Dale Watson and Joe Ely to do cameos. Now the pair is mulling a larger profile indie film called Ex Libris with Eggleston dreaming this time of a budget in the $3-5 million range. Can the man who counts manage that number? Anything is possible.