The Bonds of Filth

The boys behind 'Hot Fuzz' dish the dirt 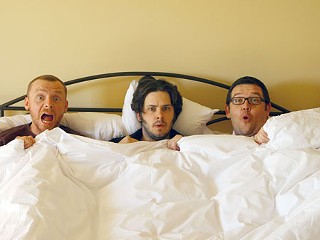 In this grave new world, when Great Britain's Lady Justice totters atop her sensible jackboots, scales pinwheeling from the seemingly endless affronts to both Britain's primal sense of fair play (hoodied hooligans-in-waiting, Banksy's Kryloned bomber-boys) and perils of a decidedly more mortal vein (the odd Argento-esque jugular back-spatter, the lack of a decent Oasis anthem of late, and a general uptick in the rabble's rousing ire), there's only one courageous metropolitan copper who can bring the noise, file the paperwork, and foil the plotters with a grim and steely-eyed mix of excellent manners and justice for all.

It's time to turn up the heat, boyeeee. It's time for Hot Fuzz.

Directed by Edgar Wright and co-written with actor Simon Pegg (reteaming onscreen with Shaun co-star Nick Frost), Hot Fuzz does for Hollywood bang-em-ups what Shaun of the Dead did for Dawn of the Dead. Guns, guts, and heart, with a side order of Edward Woodwardian Wicker Mannerisms keep things this side of surreal while the flawlessly funny cop-shop story relies largely on the trio's note-perfect parodic skills and genuine affection for the dirtiest and hairiest of high-octane movie genres.

In Austin for their Alamo Drafthouse premiere, Wright, Pegg, and Frost chatted up the Chronicle, and we discovered it's not all about ordnance-as-accessory and toothpicks in mouth; sometimes you've just got to go for the filth, too. And the mirror-shades, natch.

Austin Chronicle: Not to get too David Carradine Grasshopper on you, but you seem to be the ideal trio for making the films you make. Was that a case of just clicking instantly, with Spaced, or how did the Wright stuff happen?

Simon Pegg: That sort of instant rapport was there from the beginning in meeting both Edgar and Nick, or at least it was like that for me. I met Nick through a friend, and we became friends because he was interested in performing, and eventually I wrote him into Spaced with Jessica [Stevenson]. And then when it came time to do Spaced, Edgar was the only person on the list. There was a moment when Jessica and I had given him a sort of rough version of the first episode, and he came back to us with this, this book with everything storyboarded, and I just remember looking at him and thinking "Holy fucking shit! This guy is incredible!" And so that was the moment when it all clicked. And similarly with Nick, it was just like that.

Nick Frost: We're very different people, and Edgar talks a very different language to me, but we have a special language that the three of us share, and that is filth. Our overriding love of filth is what bonds us together.

Edgar Wright: I think we bring out the worst in each other, but in a good way.

NF: You mean in a filthy way.

AC: How was shooting Hot Fuzz compared to Shaun? It's a much more ambitious, technical film, but you've still got that sweet comic core.

EW: Hot Fuzz is easily the most difficult thing I've ever done, in terms of the ambition of it, the money involved, the amount of shots, and trying to pull all of that off. And then the editing is just as intensive. When they do a big Hollywood action film like M:i:III, they have a 20-man editing team, and so just trying to pull that off with our four editors was tough stuff to do.

NF: The downside is that as an actor you can't come in and say, "Oh, I'm so knackered," because what I've done in a 14-hour day is nothing compared to what Edgar does in a 24-hour day. So that's a bit of a pain in the ass. I wish Edgar was a bit lazier.

AC: Is it as improv-ed as it feels? Surely not.

EW: But that's mainly how we work. There's very little improvisation on the set mainly because the schedule is so tight. With Hot Fuzz we're really trying to make it look thriller-style, so it's shot Tony Scott-astic, right? That's a new adjective I just made up, by the way.

SP: But, for the record, there's very little improvisation going on. In fact, I think the only time we really did that was in Shaun of the Dead in the Winchester Pub scene where Nick is consoling me after the break up. And, of course, that was just because we needed the filth that only Nick can provide.

Hot Fuzz opens this Friday. For a review and film times see our Film Listings.