Michael Medved's head is going to explode, exactly like one of David Cronenberg's scanners, when the conservative film and culture critic gets an eyeful of the jagged, raw, meta-retro mind-bomb that is Grindhouse.

The brainchild of Troublemaker Studios' big boss Robert Rodriguez and co-conspirator-cum-Austin-B-movie-A-lister Quentin Tarantino, Grindhouse returns audiences to the good old days of classic bad moviemaking, complete with a double feature linked by previews of coming attractions, themselves helmed by some of genre filmmaking's biggest, bloodiest names.

As a sinematic experiment that clocks in at more than three hours running, it's a daring and occasionally sadistic venture, not only on Rodriguez's and Tarantino's parts, but also on that of the relatively new independent studio the Weinstein Co., which has spent more capital on marketing and advertising for Grindhouse than any other film in the Weinstein brothers' history. Will modern cineplex audiences be able to hold their ADD in check for both the zombie-bio-horror-goregasm of Rodriguez's "Planet Terror" and Tarantino's surreal, shockingly violent, high-octane bloodbath "Death Proof"? And, more to the point, does this signal a turning point in film exhibition, just as Rodriguez's Spy Kids 3-D paved the way for a return to that cinematic gimmick (for a while, anyway)? And why hasn't the Alamo Drafthouse opened up a real drive-in movie theatre yet, anyway?

The Chronicle spoke to a harried Rodriguez after the Austin premiere of Grindhouse and got the lowdown on what may well turn out to be the first double-shot of the return of the classic double bill. 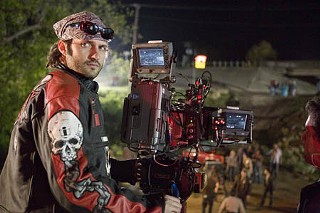 Robert Rodriguez on the set of "Planet Terror"

Austin Chronicle: We're both just a little too young to have had the legitimate grind house experience back in the Seventies, so I'm assuming you came to these films the same way most thirty- and fortysomething fans did – via VHS and later DVDs, right?

Robert Rodriguez: That's true, but really, over the past 12 years, Quentin and I have been collecting film prints, and that's where I discovered a lot of the old grind-house classics. We've watched double- and triple-features using the Alamo Drafthouse as a screening room and, you know, Quentin's really responsible for educating me about a lot of these types of films, not only the ones he grew up with, but just ones he's found over the years. You can get a real grind-house education just watching stuff that he's bought.

RR: Oh, man, you know, stuff like They Call Her One Eye; Rolling Thunder, which was shot in San Antonio; Coffee and just all of the blaxploitation films, for sure. He's got everything.

AC: Your half of Grindhouse's double bill, "Planet Terror," has a real Italian horror flavor to it, ã la Lucio Fulci or Antonio Margheriti. Between the gooey effects work and the purposely stilted dialogue you could've probably tagged it with Margheriti's "Anthony M. Dawson" nom de guerre and gotten away with it, you know? 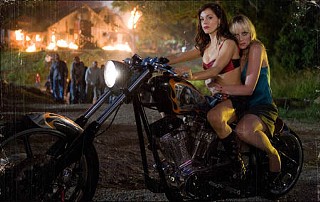 Rose McGowan as Cherry and Marley Shelton as Dr. Block in "Planet Terror"

RR: Definitely Lucio Fulci's Zombie was a huge influence, as was George Romero's Dawn of the Dead. And then there's the film that got me started in movies in the first place, which was John Carpenter's Assault on Precinct 13. And Escape From New York, too. Once I saw those films, I was like, "Oh, hell yeah, I've gotta make stuff like that!" Because Carpenter writes, directs, does the music, and that's really what inspired me, at the age of 12, to start making movies. And then, when it came time to do "Planet Terror," I knew I had to do something that would hearken back to those things that first inspired me.

AC: So whose brilliant idea was is to do an old-school double bill in the first place? Yours or Quentin's?

RR: I had just done Spy Kids 3-D, and it had done really well. There hadn't been, at that point, a 3-D film done in something like 20 years, and I just thought it would be a great kind of old-school way to watch a movie. These days, people are making 3-D movies right and left, but back then it was new again, and it turned out to be a huge success. After that did so well, I was thinking to myself what kind of other old-school kind of film could I bring back, you know, something else that was maybe unfamiliar to current audiences. And I struck on the idea of doing a double feature. The original idea was that I was going to direct both films by myself, and I got really excited about that for a couple of months to the point of making up the posters and forming a new company, RIP, Rodriguez International Pictures. So I was all ready to go ahead on that when I got sidetracked by Sin City. And it was when I took the scene that Quentin guest-directed, which I had edited, to show him at his house, that I noticed he had the same double-feature poster on the wall that I had at my house. It was a one-sheet for an old American International Pictures double billing of Rock All Night and Dragstrip Girl. And right then and there we were like, "You direct one and I'll do the other, and we'll call it Grindhouse." And within, literally, five minutes, we had the whole thing planned out, full-bloom. As is turned out, Quentin and I had been thinking about doing the same thing for years, right down to the fake trailers and missing reels.

AC: I think people are going to be really taken aback, in a good way, at how different the two films are. I mean, stylistically, they're completely distinct.

RR: That was our idea from the beginning, to make these films very different in tone and style. Because when Quentin would screen a double bill for me over at his place, he would never put, say, two zombie movies together: It was always two totally different movies. And then, too, that's where the idea of getting Edgar Wright and Eli Roth and Rob Zombie to make these fake trailers came from, because Quentin would invariably screen a handful of old previews of coming attractions. And I've got a preview of my own, for the film about Danny Trejo's character Machete, which is actually going to be a real film. We're really doing that one.

AC: Along with George Lucas and James Cameron, you were one of the first directors to champion Hi-Definition digital filmmaking and say, basically, that actual 35mm film stock is going the way of the dinosaurs. And yet, ironically enough, here you are using those very same digital tools to make this movie appear as though it were 30 years old. That's a bit of a head trip, no?

RR: It is ironic, yeah, but from the start I told Quentin I was going to shoot mine digital and then use effects to create the look of a battered old print. And he said, "If you can do that, I'll be convinced that digital is cool." And so the very next week I showed him a test and he was blown away. I think I've got him converted. Finally.