Tweet
print
write a letter
When we published the list of SXSW Film 07 award recipients last week, two – the audience winners in the Lone Star States and 24 Beats Per Second programs – had yet to be announced. They are Marcy Garriott's Inside the Circle and Joe Pickett and Nick Prueher's Dirty Country, respectively. For the rest, see SXSW Film 07 Awards.

The well-composed imagery and precise camera angles are a good tip-off that the guiding vision of Broke Sky is that of a director of photography. Longtime DP Callaway (responsible for shooting another Fest movie, Undead or Alive: A Zombedy, and one from a previous year, Drop Dead Sexy) makes his directing debut with this project, which was shot in the more rural environs of Waco. This story about Bucky and Earl, a pair of roadkill picker-uppers for the county, starts off as a light tale about a couple of Texas bumpkins but escalates midway into a dark drama about old secrets coming home to roost. Strong performances lubricate the film's tonal shift and the extensive music and multitrack sound design augment some moments of spotty storytelling. A subplot (the screenplay is by John Howard and Scott Phillips) about the threat caused by an automatic carcass-removal machine reducing in half the need for local manpower doesn't really go anywhere. The question remains: How far would you go to retain your job as a roadkill picker-upper? – Marjorie Baumgarten

Ever since Four Weddings and a Funeral, the British film industry has churned out London-set romantic comedies with some gimmick or MacGuffin at their core. Most never get an American screening, but Cashback did, although why is a bit unclear. After a particularly brutal breakup, art student and part-time supermarket employee Ben (Biggerstaff) develops three things; chronic insomnia, a crush on co-worker Sharon (Fox), and the ability to stop time. Unfortunately, that's a lot more idea than the film can deal with. Basically a 90-minute extension of director Ellis' far more successful 2004 short of the same name, it wastes the time-stoppage potential on comedy set-pieces that add little to the story. There's even a gag involving moving bodies around that wouldn't make the script of Weekend at Bernie's III. It's not without its laughs or charm, but with such a big conceit at its center, it should amount to so much more. – Richard Whittaker

We were so rooting for Flakes, but Lehmann doesn't match the cultural sway of his past work (namely Heathers) in this quirky comedy about originality and love in New Orleans. In the vein of Kevin Smith romances, Lehmann introduces us to Neal Downs (Stanford), general manager of a cereal bar, and his girlfriend, Miss Pussy Katz (Deschanel). Downs wants to make a record, but his job doesn't allow time for it. Miss Pussy wants him to reach his potential, so she schemes and plots until he's forced into it. And what's a good rock-star movie without horrendous rock music? Screenwriters Chris Poche and Karey Kirkpatrick interject moments of pop-culture hilarity ("Why do the tourists even come here?" Miss Pussy asks. "Don't they know Florida was made for them?"), and Lloyd is awesome as the stoner boss, but they can't overcome the poor sound quality and lacking storyline. – Darcie Stevens

There is a fine line between mental instability and heavy drug use. Often the two are intertwined, but with newbie filmmaker Ronald Bronstein's Frownland, mental instability takes the guise of seemingly speed-addled door-to-door coupon salesman Keith (Mann). Moving a million miles a second, the non-drug-using (at least not blatantly) Keith runs into his similarly schizophrenic friend, Laura (Wall), and loquacious hothead roommate, Charles (Grimstad), as he tries to put one foot in front of the other. An intense rumination on what it is to be human, Frownland's strength is in its detailed characterizations. But when all is said and done, a nearly two-hour film about a severe manic depressive living in New York City can't hold the interest of the general public if nothing actually happens. It surely couldn't hold Keith's. – Darcie Stevens

Greensboro: Closer to the Truth

More important than the light it shines on the Greensboro Massacre of Nov. 3, 1979, is the example Zucker's documentary holds out for the possibility of community healing and long-term solutions to racial hatred. The film offers a collective understanding of the events of that November day in North Carolina during which five participants were killed during an anti-Ku Klux Klan rally. The rally had been organized by a workers' rights-turned-Communist Workers Party group, and the gunmen were members of the Klan and American Nazi Party. Decades later, the wounds still fester, and a Truth and Reconciliation Commission, based on the South Africa model and the first of its kind in the United States, was formed a couple years ago to foster healing. Their findings were released in May 2006 after much research and public hearings. The film documents the voices (among those we hear from are still-angry widows, a die-hard Imperial Wizard whose litany of racial hatred still has the power to shock, and a Nazi's unexpected remorse for the violence that occurred). Witnessing the process of reconciliation in action is an awesome sight to behold. – Marjorie Baumgarten

Though it starts off with a promising punch of a title sequence (Boom: Guy on fire! Bang: Big red font!), and though it has a really good soundtrack, something about Harkema's tale of two generations of radicals colliding just doesn't feel right. Perhaps it's in the casting: Litz just seems too old to be believable as Susan, 20-year-old pot-dealer chick, and her repeated attempts at seducing Dan, McKellar's middle-aged radical-in-hiding are sort of annoying and gross. On the other hand, Wright is spot-on as the acerbic and tough Linda, giving just the right amount of sadness to her portrayal of a woman living with unspeakable guilt. So, it could be Harkema's attempts at French New Wave with his troublesome use of jump cuts and anomalous shots of Litz shouting radical slogans. That said, there is a lot of realism to this story of what the old has to teach the new, and the relationship between Dan and Linda is portrayed with emotional intelligence. – Diana Welch 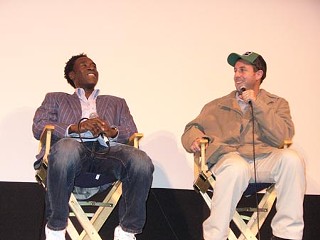 Don Cheadle (l) and Adam Sandler after a special SXSW screening of Reign Over Me, March 14 at the Paramount Theatre (Photo By Robert C. Smith) 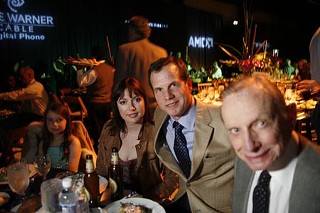 The Bill Paxton family at the Texas Film Hall of Fame Awards, March 9 (Photo By Will Van Overbeek) 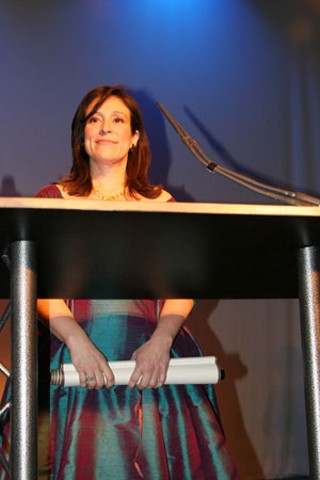