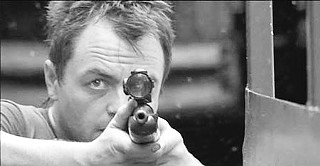 When blood flows in Ti West's Trigger Man, it jolts almost as much for the effect of red upon a palette of relentless green and brown as for the eruption of violence itself. Also shocking is how very different this film is from West's killer-bat feature, The Roost, which played midnights at SXSW Film 05. However jittery its camera, Trigger Man pushes a radically minimalist take on the slow-build-up horror narrative bearing a closer resemblance to Gus Van Sant's Gerry or Kelly Reichardt's Old Joy than to recent slow-burn shockers like Wolf Creek or Hostel (and reminds me of Larry Cohen's It's Alive in the grubby intensity of its formal rigor). I think it no slight to his work, nor entirely coincidental, to mention that West was introduced by Reichardt to Larry Fessenden, executive producer of both films, while enrolled in her class at NYU. I was able to catch up with him for a phone interview from the set of his next film, Cabin Fever 2.

Austin Chronicle: Like The Roost, Trigger Man is visually quite distinctive. Obviously some of that has to do with your very low budget, but once you determined your means, how did you go about developing the look of this one?

Ti West: Well, I knew that location forever, and that's where I grew up. So I knew we could get production value up the wazoo for just nothing, shooting in these woods where there's this great old factory and waterfall. … It's this great place where you can shoot a movie for nothing but have great scope, just suddenly zoom back and have these really superwide shots. And it would cost nothing but a park permit.

Now I really don't like video, but it felt good to do this in a vérité guerilla doc style. So I planned on video to shoot handheld with lots of zooms and racks in the shot, like the camera was this other character. But it was really important to me never to show the sniper side. I always wanted to be kind of anti-climactic, where it would feel weird, but you couldn't anticipate what was going to happen, and then when something does happen, you've kind of missed it in the middle of a really banal moment.

AC: It's kind of a throwback to the Seventies horror films, not in style but in that spirit of playing with form.

TW: Horror's my favorite genre, but it's just ruined right now. It's been fucked up so bad by becoming so profitable. It's terrible, because one of the things about it as a genre is really you should be able to just do anything. Like, you could do a seven-minute walk behind someone, because you know that if there's something horrific going on, it can take on all this extra drama. You can have these aesthetic luxuries. I kind of wanted to try out making this movie that has horrific elements but do it in almost a boringly realistic way. 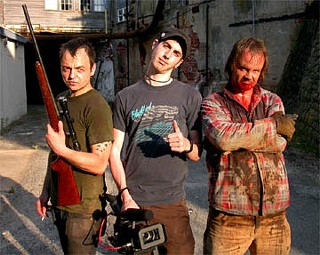 AC: How was it as your second time out making a movie with Larry Fessenden's company?

TW: Well, he started this thing called Scareflix, kind of based on the Roger Corman model. We say it's about doing B-movies with A-ideas. Like they should all be working with really different elements of the horror genre, not repeating ourselves and kind of doing art horror on no money. And after The Roost, I'd had all these people talking to me about doing another movie, but that's all it was – talk, and I was sick of not making movies, so I took this idea to Larry, and he decided to do it.

Larry had an idea we incorporated, but really, he's great and very hands-off. That's a lot more like Corman, where you had to work within a really limited budget, but you'd get to write and direct, and maybe you had to have this much blood and this much nudity, but beyond that, it would all be open. Nobody really does that now: Everybody wants to imitate whichever horror film just made a lot of money.

And most of them are directed by commercial and music-video directors who don't really have a vision of what they want to do; they just want to please their bosses and make something that looks cool. So many of them are just some cool-looking scenes with no reason to exist except to look cool. Not like I see myself as an auteur or anything, but hopefully I can help to raise the bar. We should always be striving to help out the genre.

AC: And now you're in production for Cabin Fever 2 …

TW: Well, I don't think Trigger Man had anything to do with that. In fact, nobody involved in Cabin Fever 2 has even seen it, and that's kind of important to me that they're separate. But you know when you're working, you're seen as more valuable than when you're not, so maybe it helped in that way.

But Eli [Roth, director of Cabin Fever] is a friend of mine, and he was saying that it wasn't going very well, so I should be the one to go do it, and I'm like, "You're my friend, but come on." So I went to Lions Gate, and I read their script, and I didn't like it at all, and I told them and thought that was that. And then I got a call from [producer] Lauren Moews, and she said there's another script … and I didn't like that one, either, but I liked her, so I told her … what I would have to do with the story, and she liked it. I went into it thinking they'd never hire me, and I didn't really want to do it, but the more I threw out my ideas, the more it came together, and we just went down this road. And we'll see how it plays out, but they've really left me alone. Sometimes I wonder if they're paying attention at all.

It's not even really horror. I don't know how to make a real movie, so it's just this crazy movie, like a bloody, outrageous comedy with Todd Solondz-type humor, and then it gets scary at the end. I mean I've got Mark Borchardt (American Movie) in it. It's that kind of movie.