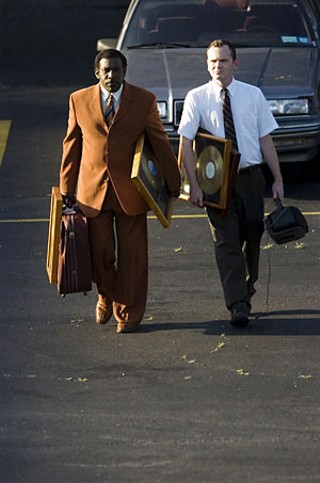 Martin is a nonentity, a failed radio engineer who dreamed of being a deejay. As played by Healy, he hangs onto a shadow of his dream of being "something" in music. With Holliday's gregarious Clarence, he's dispatched by a record firm as a talent scout. At least, that's what they think they are. Really, they've been duped into scamming wannabe musicians. They are "song sharks," getting hopeful nobodies to hand over cash for a record that will never be released. Much of the movie depends on that overused Hollywood set-piece, the audition sequence, as each act tries to impress these "producers." Yet director Zobel makes it fresh and heart-rending, as a parade of real musicians, shot in improvised scenes, fall prey to the scam. Like them, Martin and Clarence live somewhere between naivete and denial, and Healy and Holliday give them despair and compassion. This understated but moving central relationship says something tragic and tender about the desire for fame, or just recognition, in an age of American Idol-atry.