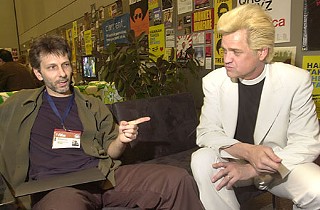 Customer Service: Rob VanAlkemade and the Reverend Billy on 'What Would Jesus Buy?'

The Reverend Billy & the Church of Stop Shopping are not your average performance-art-comedy activists. Using humor, spiritual messages, and more than 30 robed gospel singers, the Reverend Billy's mission is to save our souls from consumerism. In 2005, the Church of Stop Shopping decided to face the Christmas season head on. Traveling across the country in two buses (biodiesel, of course), they left New York the day after Thanksgiving and arrived in Disneyland on Christmas Day. Their mission was to persuade consumers that at Christmastime, it is we who are being consumed. With What Would Jesus Buy?, director Rob VanAlkemade and producer Morgan Spurlock documented this journey and created a film that is as entertaining as it is jaw-dropping. The Chronicle sat down with the Reverend and VanAlkemade to talk about our salvation from the impending Shopocalypse.

Rob VanAlkemade: Did you get exorcised? I heard rumors that he exorcised a reporter recently.

Austin Chronicle: It wasn't me …

RVA: [to the Reverend Billy] How you feeling? Did you pull something?

RB: I pulled a muscle in my soul! Is that a fair-trade cup of coffee there?

RB: It's all right. We're all sinners. Can we hand out some fair-trade espresso beans? Can we put that out of sight? The amount of money that you paid for that cup of coffee, about 3 percent went to the coffee farmers. They can't feed their children. It's just impoverishment. Yet the president of that company, the CEO, is a billionaire. That's what we're dealing with here. We have some fair-trade beans that are going to make you really high. There's that special buzz of doing the right thing. Hallelujah! That smooth amphetamine high of doing the right thing.

AC: [through a mouthful of chocolate-covered espresso beans] So, how did this film begin?

RVA: I was looking for something to cover during the 2004 political conventions in New York and gravitated toward the Church of Stop Shopping. Whenever I came across them, I'd get a bit more inspired and invigorated. I was depressed at the time, kind of isolated and alienated from the filmmaking process, definitely from the political process, and he brought me out of that just at the touch.

RVA: Actually, he exorcised me as a perfect stranger. I was shooting him in this bar off Union Square, and he interrupted his own sermon to charge toward me. I thought I was in deep shit. I thought I had passed the line of nosey journalist and was going to get decked. He grabbed my skull with one hand and exorcised the halfhearted journalist from my soul.

RB: Amen! And we're doing it again now! Now he's just too serious, and we want him to accept into his soul a sense of humor! Amen!

AC: Tell me about the ideas behind the movie.

RB: Christmas is the main American ritual now, a half-a-trillion-dollar industry that starts in the summertime. Right now, we're punch-drunk from last Christmas, and we're in the middle of, on average, the four-month period of time in which we pay back the debt from the previous Christmas. As soon as the loans are paid, somewhere around the beginning of May, you're in the countdown toward the first Christmas images sneaking into the advertising world. It's an annual cycle, the debt is moving forward across the year, and the Christmas advertising is moving backward. They're almost meeting now; it's becoming a complete ongoing process.

AC: The film is called What Would Jesus Buy? How does Jesus fit into this picture?

TB: Not a Republican.

RB: And not a Democrat.

AC: What are your hopes for the movie?

RVA: We're pretty confident that it will be seen by a whole lot of people, and we think eventually it will help us save Christmas from the Shopocalypse. We have pretty high hopes.