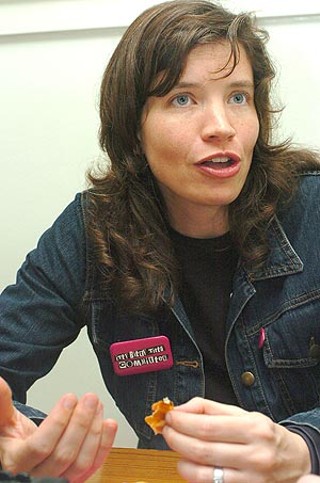 Jamie Babbit makes films about issues. 1999's But I'm a Cheerleader set up restraightening camp for homosexual teenagers in a pastel-colored satirical world; 2005's The Quiet portrayed the dark, quiet backwaters of incest and deception; and this year's Itty Bitty Titty Committee is Babbit's return to humor. It's the story of a young, nonpolitical, small-cupped lesbian who is turned on to feminist ideology and activism after meeting a group of radical feminists who call themselves the CIA, or Clits in Action. With the lyrical aid of riot grrrl punk rockers such as Bikini Kill, Le Tigre, Sleater-Kinney, and Heavens to Betsy, Babbit's entertaining film, made by an almost all-female crew and starring only females as leads, sends an important message about the slacking off of the feminist movement in these oh-so-progressive times in which we live.

Austin Chronicle: Tell me about POWER UP [Professional Organization of Women in Entertainment Reaching Up].

Jamie Babbit: POWER UP is a nonprofit organization based out of Los Angeles whose mission is to empower gay women in film, and they finance short films for directors. This is their first feature film that they've financed, and they want to empower women filmmakers by actually using money. So, unlike other organizations that just empower you through support or work or whatever, they actually give you cash to make films.

AC: You said the extremist feminist political group in the film, Clits in Action, was based on an early Nineties group in New York City called the Guerilla Girls. Were the reactions to this group your inspiration for the Clits in Action in Itty Bitty Titty Committee?

JB: It was more than just the Guerilla Girls; it was also a movie called Born in Flames that I saw, which is about revolutionary feminists who blow up the Washington Monument. That was a really great film in the early Eighties ... so it's kind of an homage to that movie. And I was also really inspired by the riot grrrl music coming out of Olympia, like Hole and Bikini Kill and Sleater-Kinney, so that was a really big influence, also.

AC: How have you portrayed the comedic absurdism of political extremists in your film?

JB: There's so much in-fighting amidst all of the groups. But I also think that when the left fights the right, it's kind of boring because it's just like of people yelling at each other. But it's when the left fights the left that it's more soul-searching, and this movie's a lot about the left fighting the left, within the movement, to achieve change. There are many different feminists in the movie, and they all have ideas about what's going to work. And they're all right, and they're all wrong. That's what I wanted to talk about. I don't think there's any right answer. I think they're all problematic, and they all have good things about them.