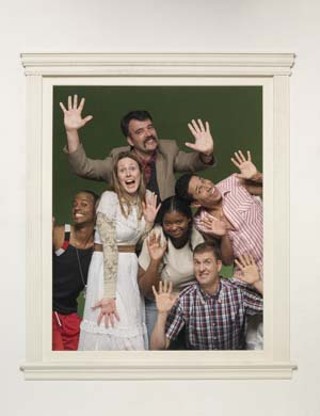 A smattering of new series will launch soon, which means my DVR will be working overtime. SXSW Film 07 has just started, and there are several panels that are TV-specific. I'll be checking into those and giving you the scoop soon enough. For those staying around the home front, Comedy Central is debuting a nonscripted series that doesn't quite meet the recently wrapped Sarah Silverman Program's standard but is still worth a glance. The series is Halfway Home, and the title is apt, as the show hits the mark half the time.

Set in a halfway house for parolees, the series stars several actors who are well-known to TV viewers, including a couple of faces you know you've seen but can't quite place. The former includes Oscar Nuñez of The Office, who stars here as a flamboyant gay male prostitute, and Jordan Black of Mad TV, as a terrorist wannabe jailed for Internet fraud. The lesser-known but recognizable faces include Octavia Spencer, who most recently appeared on Ugly Betty. Here, she stars as Serenity, a convicted robber with a hot temper. The favorite target of her ass-whoopings is arsonist and tattle-tale Alan, played by Regan Burns – who you've also seen all over TV but will recognize from a certain credit-card commercial. Spencer and Burns are hilarious, she with her doll face and penchant for the well-timed scoff, he with his knack for looking like a dork and making racist edicts ("black people don't float"). The lesser-known actors include Jessica Makinson as Carly, busted for drug trafficking, and Kevin Ruf of the Groundlings as the house supervisor Kenny, who barely keeps things under control.

The men are in top form when it comes to improvisation. Nuñez is great with asides, while Burns is remarkably poised while saying and doing the most outrageous things. His enchanted expression while giving the details of a recent bowel movement is both disgusting and hilarious. Spencer delights with her no-holds-barred physical humor and sassy, gum-chomping, bad-girl persona. As the good boy who wants to be bad, Black is helped by his slight physique. Overall, the cast appears to be having a good time, making you root for them even when they don't quite hit the mark. After a few episodes, I think the show will have found its groove. Because it's on cable, it'll be given the chance to do so.

Coming up on Special Session:

"Texas on Film": visions of Texas, past and present, and the future of its film industry. Will the Legislature enact incentives proponents say will keep filmmakers from leaving the Lone Star State for incentive-rich ones like New Mexico and Louisiana? Airs March 11.

"The Ides of March": Where does the Lege stand at the midway point? Special Session looks at the hot-button issues and makes some calls and predictions. Airs March 18.

"Highways to Hell?": Road rage over toll roads and heavy traffic are flaring. What is the solution? Airs March 25.

A couple of folks have e-mailed to tell me they or a friend have a short on review at the On the Lot Web site, the new Mark Burnett/Steven Spielberg reality series premiering this spring. The filmmakers are hoping to be one of the core 16 contestants to make it to the series, where they will compete for a $1 million development deal. Viewers will vote American Idol-style on who moves forward and who goes home.

One of the hopefuls is Shane Scott and Broom Closet Studios. His production company produces Fangoria TV's Prof. Griffin's Midnight Shadow Show, which stars local actor, Joseph Fotinos. Scott's film, "The Legend of Ghostwolf," is listed in the action/adventure category; go to this link: films.thelot.com/films/12724.

I'm sure there are more of you out there. If so, e-mail me your link.

On the Lot premieres May 16 on Fox.