Canadian filmmakers Debbie Melnyk and Rick Caine set out to celebrate a lion of the left. They ended up with something a little different. 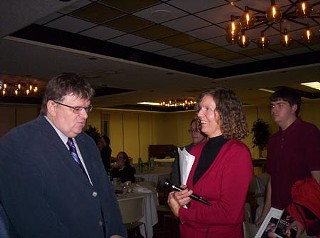 Michael Moore is a lightning rod for American political controversy. The documentaries he has made, beginning with Roger & Me in 1989, have catapulted him into a symbolic position as a spokesman for the left. The films and his outsized personality have also turned him into an easy target for the right. Moore is as adored by his fans as he is hated by his enemies. The peripatetic muckraker seems to revel in all of the controversy, but somewhere along the way his journalism started to become eclipsed by his showmanship.

While reviewing The Big One in 1998, Moore's third film and second documentary, I wrote that the filmmaker was "fast becoming all things to all people. He is seriously in danger of becoming the new American Shmoo – you remember, that adorable, bottom-heavy, blobby thing in Li'l Abner that would shape-shift into anything that's sure to please its human host. Well, Moore is hardly quite that egoless, but his routine as America's roving populist gadfly is a great act."

Since then, Moore has gone on to win an Oscar in 2003 for Bowling for Columbine, his examination of this country's gun obsession, and the Palme d'Or at Cannes in 2004 for Fahrenheit 9/11, his anti-George W. Bush screed designed to build voter momentum for ousting the president in the November election. Moore's fan base grew over the years, as did his pocketbook. Meanwhile, some voices were growing louder from viewers who, though sharing Moore's political beliefs, were nevertheless troubled by growing accusations against Moore's breezy and perhaps unjust documentary practices. Many found themselves uncomfortable with Moore's guerrilla-ambush tactics for obtaining hard-to-get interviews; others believed the filmmaker used certain footage out of context or under the false guise of spontaneity.

Moore's acceptance speech at the 2003 Oscar ceremony, which took place just as the United States was about to invade Iraq, served as a rallying cry for those opposed to the war. For Toronto-based filmmakers Debbie Melnyk and Rick Caine, their admiration of Moore was never greater than at that moment. Yet, once this pair of documentarians began to make their own film about Moore, their path of investigation led to a whole new slew of questions and changed the ultimate shape of their film. Most of the people they spoke with give Moore credit for invigorating the documentary form with his homespun approach to Roger & Me and for slaying the popular myth that documentaries are synonymous with automatic box-office poison. However, as their interviews progress, we witness the filmmakers transforming from unquestioning true believers to disillusioned observers. Manufacturing Dissent takes us on Melnyk and Caine's journey toward a better understanding of their subject. Fueled by neither political agenda nor axes to grind, they present the fairest overview of Moore's methodology and filmmaking practices to date.

Their title, Manufacturing Dissent, is a takeoff on that of the eye-opening documentary Manufacturing Consent, which looks at the beliefs and ideology of the scholar and political dissident Noam Chomsky. Chomsky, who is one those interviewed in Melnyk and Caine's film (along with Errol Morris, Albert Maysles, John Pierson, Ralph Nader, Dave Marsh, and many others), has become over the years an iconic figurehead of the left, a position that Moore is coming close to usurping. Nobody likes it when the Great Oz is revealed to be a mere mortal running a switchboard behind a curtain. And few, I suspect, will want to see this particular emperor without his clothes. Yet, Manufacturing Dissent is not interested in stripping Moore from his garments but rather retrieving them from the spin cycle where they can be washed in public. We spoke with Melnyk and Caine by phone in Toronto about their experience making the film.

Austin Chronicle: Can you provide some idea of the progression you went through from fandom to disillusionment?

Debbie Melnyk: We started out saying, "Hey, we want to do a film about Michael Moore," because we'd just done this film about Conrad Black, who is a right-wing press baron who owns papers in Canada and the U.S. We followed Black around for a couple of years, and Rick finally said, "You know, can't we do a film about someone we like? We don't really like this guy, and we're not on his side as far as his ideals and ideology. We're progressive liberals." So we said, "Hey, how about Michael Moore? And wasn't that Oscar speech great?" We were watching the television that night, and I'm like "Oh, my God. That speech is great. I love that. Look at all the faces of the audience."

Rick Caine: In fact, if you watched the Oscars this year, we noted that not one single person is even discussing the war anymore. As Debbie outlined, we were really like wide-eyed Canadian fans, and then we reached a fork in the road: This way lies the truth, and this way lies the celebratory film about Michael Moore, and they were to a certain degree two different destinations for us. We had to shift what this is about and figure out what we wanted to say ...

DM: ... and do we want to go down that road? I remember having this conversation with John Pierson [the producer's rep who sold Roger & Me and presently teaches a producing class at UT, which has taken on the promotion of Manufacturing Dissent as a class project] where I said, "Well, if we go this other way, and we just say, 'Oh, Michael Moore is great; we love his films and all that,' it'll get into all the festivals for sure, because that's the type of film they want to see. And John said, "But is that what your film means? Is that what you want to see?" And we said, "No, but it'll get into the festivals. And then we can redo it and make the film we want." And he just said, "You guys are nuts."

RC: From our point of view, the easy thing would have been to just make the celebratory film and then try to sell the film to Michael's fans. So from a marketing standpoint, we could probably do a lot better doing that.

DM: And we wouldn't be considered the bad guys.

AC: So many of the people you interview in the film could be described as former allies of Moore's.

RC: That got us wondering right away. "You were a big supporter of Michael Moore's, so what's happened in the intervening years?" That was always one of the questions we had when we started talking to people. It is true Michael is very much the left's cultural touchstone. What we found fascinating, though, was the notion that some of his people who had known him from way back in the day were now no longer allies. So we wondered what happened there. For us, that is where our wide-eyed Canadian-ness started to fall away.

DM: But we didn't know any of the backstories until we started to do research.

RC: We didn't know that there were so many skeletons in the closet. We really had no idea. It wasn't our intent to go there. But at some point, we had to supersede our own prejudices and say, "Look, are we going to try to do this? Are we making a nonfiction film and telling the truth, or are we just going to stick to the official story?"

DM: And when you do attack a cultural icon of the left, it's very difficult because people say, "Why are you doing this? Okay, he's made some mistakes, but why are you throwing stones at this guy, who at that time was the only one speaking out against George Bush?" Unfortunately, we weren't making a documentary about Bush; we were doing a documentary about Moore. We're just saying what we found.

RC: We're not saying that we have the truth; we're just saying we have our truth of what we found in the course of making the movie. The question I would pose is: How many little lies, distortions, mistruths, and deceptions along the path to the greater meta-truth can you do before the greater meta-truth starts to suffer? Let me pose it another way: I get the whole notion of speaking truth to power, but what if you're speaking half-truths to power? Is it half as effective? I don't have the answer to that, by the way. I'm just wondering.