Marcy Garriott on the intricate dance between documentarian and subjects 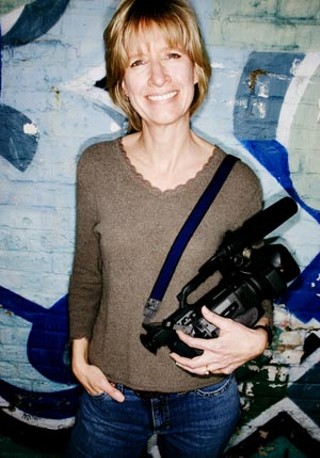 Marcy Garriott knows about misconceptions. The slim blonde with sparkling blue eyes knows she might be pegged as a nice suburban housewife with a couple of kids, a minivan, and a dog. If you stopped there, you wouldn't discover that she is the filmmaker who did time at sweaty gyms and boxing matches here and in Mexico to tell boxer Jesus Chávez's story in her award-winning documentary, Split Decision. Five years ago, after the success of her first film, she wasn't looking for a good parking space at the mall. She was looking for her next project among Austin's late-night B-boy crowd. So, how did she blend in among the largely male, youthful African-American and Latino crowd? She didn't.

Garriott found herself at B-Boy 8 at the suggestion of Austin Film Society director of programming Chale Nafus. B-Boy 8 and subsequent B-Boy events are grassroots-structured competitions organized by Austin's Romeo Navarro, drawing breakers from across the state. Though hip-hop and B-boys – the "B" is short for "break" – embrace their outsider status, most people have at least a passing knowledge of breaking and hip-hop culture through popular media, as did Garriott. And several other films had already been made on the subject. While she found B-Boy 8 interesting, she wasn't sure it was for her.

"When you choose a documentary project, it has to be something you want to spend your life on for several years," she says. "It's never a rational choice. It's an emotional choice."

She got her answer when the battles – showdowns where crews perform in a kinetic, physical call-and-response to one another in an effort to outshine the opposition and garner respect from those assembled – began.

Capturing the intensity of the B-boy battles and the dancers' personal stories became Garriott's new obsession. Four and a half years later, she brings the result to SXSW Film 07 in the form of her second documentary feature, Inside the Circle.

Call it luck, kismet, or coincidence, but Garriott began filming at the beginning of a seemingly tailor-made story of two then-obscure 17-year-old dancers (Josh Ayers and Omar Davila), who start as friends and find themselves rivals as they begin to move up the ranks in Austin – and eventually global – B-boy circles.

"What surprised me in making the film was finding out to what degree Austin and Texas as a whole were making their mark in the hip-hop dance world," Garriott says. Thanks to the Internet, "Texas crews and dancers rank among the world's best, a fact well-known to B-boy communities worldwide but not necessarily recognized here at home." However, Inside the Circle is not a feel-good, "star is born" story. While the inherent passion that drives hip-hop culture is clear – as in Split Decision and unlike some recent popular documentaries – her filmmaker's point of view does not drive the film.

"It's a conscious choice," she says. "I really wanted this to be their film, through their point of view. [The film] is also about marginalizing and making assumptions about people. People are going to come in with certain stereotypes, and they're going to be really wrong."

That's not to say Ayers and Davila are not without their flaws. Personal obstacles and the consequences of poor choices are documented with candor alongside the heated battles. Garriott says she's not interested in capturing black-and-white representations of situations or people – if they even exist – but in sorting through the large and messy gray area where the truth resides. In doing so, she forces audiences to confront their misconceptions.

"I have to be very careful. I don't want to make a documentary about people I don't respect. I think that's betraying people's trust," she says. "I have to respect what they're about and what they do, but it also has to be honest and fair."

Mutual respect is ultimately what got Inside the Circle made. "No question, it took time for [the B-boys] to build trust in telling me their stories," Garriott says. "They wanted to see if I was really making a commitment. When they saw I was taking it seriously, they did, too."