The legend of Alejandro Gomez Monteverde 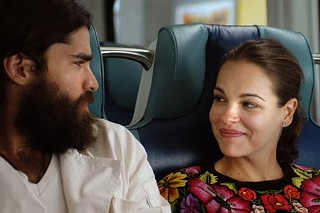 It began with his toys, but G.I. Joe wasn't a warrior, and Superman didn't fly. As Alejandro Gomez Mont-everde grew up in Tampico, Mexico, he instead used the toy men as actors on the stage to fulfill a deep need to tell very human stories.

The University of Texas film grad's feature Bella marks a culmination of that yearning. His first full-length film took the People's Choice Award at the Toronto International Film Festival for its beautifully shot, thoughtful meditation on loss, connection, family, and food.

"I believe that being a filmmaker is not just a profession but also an opportunity to make a difference in the world," Monteverde says, whose wife, actor Ali Landry, is pregnant with their daughter. "There's all this hatred around the world, and we live in a very sexually driven culture with rapists and people abusing. A lot of films are very violent. When I graduated from film school, I decided I wanted to make films in which people love more and judge less." Metanoia Films, the company he started with Bella star Eduardo Verástegui, was formed to accomplish that, and it marks a major leap from their Mexican childhoods.

"In Mexico, I literally thought actors like Tom Cruise were the filmmakers," he says. "That's how ignorant I was. I thought the actors were the creators." But that changed when a 17-year-old Monteverde was sent, as punishment for teenage excesses, to Austin to learn English. During a stroll down Guadalupe he came across student filmmakers in action. "I realized these guys were doing exactly what I had done with my toys," he says, "but with actors."

Monteverde could understand little of what the student filmmakers said, but he quickly understood that the University of Texas was where he wanted to be. He went to the film department and told them: "'Me. Dream. University of Texas. Film.'" But dreams don't come easily. The program repeatedly rejected him, so he took classes at Austin Community College, learned English, and kept trying. He figures the UT film folk finally took pity on him when they said yes. Next, he talked his way into using department cameras whenever they were idle, spent his rent money on film stock, slept on a couch near the faculty mailboxes, and seldom made it to class. The result was 2000's "Bocho," a short that went on to win awards at four film festivals.

One award included an internship with a New York City-based cinematographer. But Monteverde found himself fetching coffee and instead talked his way in the door at Panavision, where he magically finagled funding for a war film and cameras for the feature shoot. He was to pick up the equipment on Sept. 11, 2001. Instead, he watched the World Trade Center towers fall, and all film production in the city ground to a halt. "I told them 'I'm a student; I can't shut down,'" he recalls. "'I don't have any dollars to my name.'" With one camera and a van full of prop M-16s, he begged random people to appear in the film. The resulting short, "Waiting for Trains," won seven film festival awards and sold to PBS.

After that, the film offers began to roll in, but Monteverde balked. "I wanted to do films, but I wanted to live a life where I don't have to compromise my beliefs," he says. "I need to start passing on everything. It was very superficial stuff – a guy who robs banks and explosions. I'm used to living on couches. I don't need to compromise."

The idea for Bella, which was co-written by Austinite Patrick Million, came to Monteverde during a drive from Austin to Los Angeles, where he was originally set to make a film about boxing. "Pain is a language," Monteverde says of his realization. "When you share with another human being, it can really bring you closer together. Each person's pain becomes each person's medicine. It becomes each other's redemption."

The story is inspired loosely by trials experienced by friends but also by the immigrant family's emphasis on food and how it holds them together. "In Mexico it's all based on family," Monteverde says. "You live in your parents' house pretty much until you marry. With Mexican filmmakers, you always see this same texture and character development. We tend to go a little deeper. In my humble opinion, culture has a lot to do with who you are."

For now, the filmmaker is on a mission to get Bella out to the world by showing it anywhere and as often as he can. "We've shown it to 100,000 people already," he says. "We're screening everywhere – boom, boom, boom. It's the only way independent films can win in the box office. If you don't have Brad Pitt, that's all you can do."