The groundbreaking 'Austin Past and Present' interactive documentary means free museums, movies, music, and more all over town 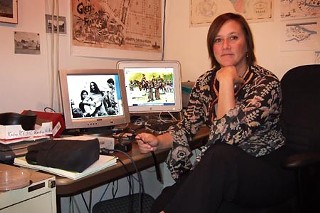 Most of us spend little time in the library, much less in one like the Austin History Center, where many of the city's oldest photos and historic documents are hidden in temperature-controlled rooms, and just looking at them requires checking in all your belongings – pen and paper included. But until now, that's the only way you'd have seen much of what's found in Austin Past and Present, award-winning documentarian Karen Kocher's six-year labor of love.

In compiling 250 million years of Austin history into one little disc, Kocher's team spent thousands of hours in the AHC, and often they found their favorite material merely by accident or through extreme sedulousness. "One example of a supervaluable find are the images of the 1964 civil rights read-in at the City Council, where Joan Baez appeared," Kocher wrote to me in an e-mail. "We went into the negatives to find these. We found them by cross-referencing with newspaper articles, etc. Many of these images were printed for the first time for us, so in essence, unless someone were really digging, they might not even see them ever at all."

When Kocher began working on APP, she set out to do more than just unearth these rare remnants of Austin's past. She wanted to create a story out of them. "I wanted to reach out to a younger contingent through the use of interactive technology," she says. "Not everyone's gonna come in and put on the white gloves. There's no narrative."

Despite a background in two strong narrative traditions – journalism and filmmaking – Kocher disobeyed the golden rule of both in order to create an enormous digital archive of Austin history and then take it beyond just a searchable collection. No matter how great your footage, your quotes, your splendid turns of phrase, too many of them traditionally make for an overwrought storyline: To maintain narrative structure, goes the golden rule, you must murder your darlings. But APP's interactive format allows the audience to set its own boundaries, which allowed Kocher to keep a lot of darlings off the cutting-room floor.

Combining historic documents, illustrations, photos, music, and film footage, APP is an interactive DVD that you can explore by map, timeline, or index. If you want to take the Geo Tour, for instance, you begin with an illustrated city map. From there, you click an area (like Downtown) to reach a more detailed map, from which you can choose to explore a specific spot, like Sixth Street. Once you're on Sixth Street, you can peruse a pictorial history including such photos as the 1872 shot of the L.D. Lyons Fancy Groceries store and the even older photo of Sixth when it was just a dirt road called Pecan Street.

The Time Tour, on the other hand, begins with your basic horizontal timeline: Click on any era to watch a 10- to 25-minute documentary about it. "Before There Was Austin" begins with illustrations of Austin's topography 250 million years ago, connecting its geographical changes to the creek beds and fossil-pocked limestone buildings we recognize today. Meanwhile, "Modern Austin: 1976 and Beyond" makes nice use of news footage to chronicle Austin's transition into the Silicon Hills (see a very young Michael Dell at a 1988 press conference) and a hot spot of environmental activism (watch Jim Bob Moffett plead charmlessly for his Barton Springs development).

APP's third method of access is the index, which Kocher's team added when usability testing showed people trying to search for specific things. Curious about the Save Our Springs Alliance? The Wheatville neighborhood? Roy Velasquez, founder of Roy's Taxi Co.? Search alphabetical lists by people, place, or subject, and up comes a wealth of information – you could end up with an illustrated biography, a short documentary, or even a virtual tour of a historic building.

"This is a groundbreaking type of activity," says Joe Ramirez, social studies curriculum specialist for Austin Independent School District. He's been working with the district to incorporate the program into school curricula. APP's level of engagement, he says, is particularly useful. "You're hearing music and seeing images and animation relating to [a student's] specific community. They'll see something they recognize – a place they've been – and see what it looked like 100 years ago." Ramirez helped a team of teachers last summer develop lesson plans designed to use APP in alignment with state standards and the Texas Assessment of Knowledge and Skills, and the program has proven versatile enough to use throughout the grade levels. Second-graders use it to develop map skills and learn about the concept of "community" – both its social and physical characteristics. Meanwhile, seventh-graders learn the role Austin has played in Texas history, and 11th-graders studying the Sixties examine local integration struggles and protest movements as case studies.

Austin Past and Present's appeal goes beyond AISD. With proponents like the mayor and Mayor Pro Tem Betty Dunkerley, APP will soon be found in kiosks around the city, at places like the airport, City Hall, and the Austin Convention Center. These kiosks allow anyone to sit and play with the program Centipede-style, with navigation via a classic rolling-ball/button combo. The Austin History Center has the first kiosk up and running, but this week, SXSW Festivalgoers who don't make it to the AHC can still play with the program on laptops set up at a special Convention Center display. This week also sees APP's official launch at the Austin Public Library, making it available on every branch computer. Like a roving museum exhibit, Kocher's little DVD might itself become a ubiquitous feature of the Austin landscape.

"On one level, [APP] is like a museum exhibit," says Bart Marable, whose company, Terra Incognita, also works on interactive media projects. "But on another level, it's a historical archive of records. And then another way to look at it is almost like a television program you can sit back and watch. It draws on all these models." APP is also sold as a two-disc set, with one formatted for TV, allowing you to just watch it like a documentary. This version is missing some of the detail, of course: You can't click through the images and pore over the biographies the way you otherwise could. But you still get a rich and comprehensive story of Austin – from the dinosaurs through the dot-com bust – without having to go near a mouse.

Despite the interactive disc's Web conventions, APP is not accessible on the Internet. A lot of digital archives are available online, of course. The New York Public Library Digital Gallery, for instance, has 520,000 images available for perusing from your computer. Locally, Terra Incognita's talented team of designers, researchers, and technicians work on beautiful projects, such as the award-winning "Churchill and the Great Republic," an interactive exhibit for the Library of Congress (www.loc.gov/exhibits/churchill/interactive). But Kocher's materials pull from such a variety of sources – more than 160, ranging from the Austin History Center to the National Baseball Hall of Fame to an old suitcase hidden under longtime Clarksville resident Pauline Brown's bed – that they can't all be licensed for Web use. That's why the kiosks are proving such an innovative civic tool.

"We're really excited about it," says Austin Public Library's marketing program manager Patricia Fraga. "It shows off our city's resources. A lot of people are unaware of the amount of information available in the Austin History Center archives." Twenty-five percent of APP's motion-picture contents, as well as 1,200 of its 1,600 images, come from the AHC archives (which actually house more than a million photographs). Not only does Kocher's project bring attention to this city treasure, but it will help support their ongoing preservation efforts, as all DVD sales benefit the Austin History Center Association.

"This is a trend you're seeing across the world," says Marable, who's currently working on archival projects in Philadelphia and the Netherlands. "There's an interest in local history and bringing collections out into a broader light. ... You're seeing a lot more use of digital archives to tell the story of a community." With its broad civic applications, the format Kocher has developed for APP may turn out to be particularly fitting for community-oriented projects, especially given its low-key programming, which Kocher emphasizes is not "fancy technology." While APP certainly required a computer programmer to make it work, she says, "I didn't want it to be about how cool the interface was. For me, content is king."

APP does put Austin front and center, and true to local custom, it's a veritable Slacker of Austinites, requiring 24 pages of credits to list all the project's contributors – many of them, surprisingly, as voice actors. Cameos include everyone from Lucy Baines Johnson and the late Ann Richards to environmentalist Robin Rather, writers Stephen Harrigan and Larry Wright, and, of course, a slew of musicians, including Marcia Ball, Cactus Pryor, and Darcie Deaville.

"Take any latitude and longitude point on the planet, and there's any number of stories that can be told from that point," says Marable. "The story of a community is tremendously complex, so by using something like interactive storytelling, you're able to tell the stories from many different perspectives, and that's one of the things [Kocher] has done."

Preserving Our Digital Legacy and the Individual Collector