And I Approved This Instant Message

What will page views, YouTube clips, and MySpace friends add up to for Web-savvy Democratic hopefuls? 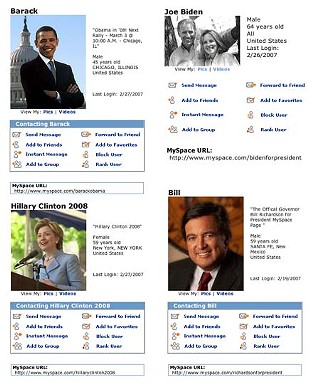 Joe Biden doesn't have a prayer. And, no, it doesn't have anything to do with his idiotic remarks about Barack Obama's personal hygiene. Instead, the odds on Biden's bid for the White House in 2008 are readily available to any Web surfer who spends a few minutes at MySpace.com. In late February, the Biden for president page on MySpace showed that the Democratic senator from Delaware had a grand total of 332 "friends." Biden's fellow Democrat in the Senate, the "clean" one from Illinois, had 45,043.

To make Biden feel just a bit worse, yet another Senate Democrat running for president, Hillary Clinton, had 23,798 friends on her MySpace page. Tom Vilsack, who dropped out of the race and of SXSW Interactive soon after being interviewed for this piece, had nearly 1,400. Even Rudy Giuliani, the former Republican mayor of New York who hasn't formally declared his candidacy, had 665 friends.

These friends don't necessarily translate into votes, but the MySpace numbers are part of the latest wave of presidential politicking via the Internet. The proliferation of blogs and social networking sites, along with the avalanche of video clips now available via YouTube and Google, have made the 2008 presidential race the most Web-focused in history.

Clinton announced her candidacy with a video on her Web site. Former North Carolina Sen. John Edwards (11,571 MySpace friends) allows his supporters to subscribe to his podcasts and get campaign updates on their mobile phones. The Web site for New Mexico Gov. Bill Richardson (658 MySpace friends) has prominent links to MySpace, Facebook, Flickr, Zanby, YouTube, and PartyBuilder. The link on the YouTube site has two video clips of Richardson announcing his candidacy for president: one in English and one in Spanish.

Of course, politicians have been using the Web for years. In 2004, Democrat Howard Dean made it a centerpiece of his campaign and his fundraising effort. In 2000, George W. Bush's campaign made his TV ads available on GeorgeWBush.com. That year, a Republican campaign strategist, Charlie Black, told me that Bush's Svengali, Karl Rove, understood the power of the Internet long before Bush and his cronies "ever started the campaign." He added that campaigning on the Web was important for two reasons: "Opinion leaders – the people who provide donations and all – they are into the Net big time." The second reason? "Kids under 30 get their biggest source of information on the Internet, not TV or radio or newspapers" (see "Webmaster Bush," Jan. 5, 2001).

Those same dynamics remain in place for the 2008 race. And yet it appears that the Democratic candidates for the White House are trying to leverage the Web more than their Republican counterparts. Two Republican candidates – Mitt Romney, the governor of Massachusetts (1,495 MySpace friends), and Sam Brownback, the U.S. senator from Kansas (757 MySpace friends on an unofficial page) – don't have any apparent links to social networking sites on their campaign Web sites. Another Republican hopeful, California Rep. Duncan Hunter, has a sparse Web page that has very little content and no links to any of the social networking sites, nor does he have a page on MySpace.

The Democrats' embrace of the Web may simply be due to the fact that there appear to be more viable Democratic candidates for the White House, and all of them are trying to distinguish themselves from the pack.

Some of these Web gimmicks border on the absurd. For instance, Clinton's Web site has a selection of 30 "HillaryBuddies." They are icons – ranging from "Cat Lovers for Hillary" to "International Union of Painters and Allied Trades for Hillary" – that supporters can use on their AOL Instant Messenger. Web-based tricks like these are leading to a rather unusual political smackdown: Candidates are going out of their way to declare their geek appeal.

In late February, Clinton's Web site posted a press release claiming that VoteHillary.org had logged more than 1.7 million page views over the previous few months. Those page views, combined with the fact that the campaign was launching a new marketing campaign by buying selected Google Adwords, compelled Clinton campaign operative Peter Feddo to declare that "there is no doubt that Hillary Clinton is the candidate of the Internet savvy in 2008."

Richard Davis, a political-science professor at Brigham Young University and the author 1999's Web of Politics and 2003's Campaigning Online, says that Clinton and other candidates for the White House aren't necessarily using the Web to reach voters. Instead, he contends that candidates are pushing their Web platforms "to get attention from the media. It's not to win votes. You don't win votes with a video camera. All you do is signal to the press and the public that you are media savvy."

Further, Davis says that while cyber clicks are fun, they're are no match for campaign cash. And that's where contenders like Biden, Brownback, Hunter, and other lesser-knowns will likely fall by the wayside. They simply won't be able to amass the huge amounts of money needed to oppose rock stars like Obama, Clinton, and John McCain (1,415 MySpace friends). In the end, Davis says that financing, name recognition, and party support will determine success. Those factors, he says, "will weigh more heavily than whether someone has a blog or a video on their Web site."

Net Politics: The Internet Can Make You President