Ideally, connections drive SXSW: bands and labels, movies and distributors. For the Interactive Festival, it's links between content and modes of dissemination, people and technology, and present and future: less tangible ideas that arguably serve a greater good in that they transcend art and enter the realm of information. Last I checked, information is still power, and the somewhat vague concept of Web 2.0 still eludes some, while others look to Web 3.0. Another digital divide to overcome – thanks, Web 2.0.

That's where people like Joichi Ito and Justin Hall come in. Two men who balance being supremely tech-forward (Hall's e-mail came with eight different ways of contacting him) with a desire to remember those people who just want to see pictures of their grandchildren or play a game of online backgammon. Perhaps Web 3.0 will just be Web 2.0 simplified for the less tech-savvy.

I sat down with these two tech-titans with nothing but wires and cell-phone signals between us and asked them about everything from their joint SXSW panel to bridging the gap between gaming and the Internet. But, first off, let's see some credentials: 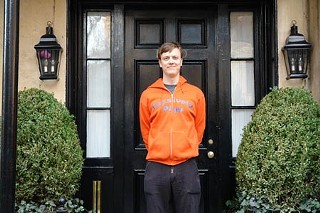 Justin Hall kept a blog in the days when it was called a Web-based diary, circa 1994, only to be later tapped by Rolling Stone and Wired as a geek trend-spotter. These days, in L.A., he's fallen in with the Hollywood set, getting paid to show up at a talent agency every few months and speak to the state of gaming and the Internet. "That's pretty lucrative and allows me to stay focused on my work on the side without having a day job," Hall says. With this combined with academic-research money and funding from the BBC for his work in passively multiplayer online gaming (see below), he stays fed and on the cutting edge.

"Basically, I enjoy technology and new things a lot." To hear Joichi Ito say it, you'd think he was a hobbyist, when in fact he has created, sat on the board of, and chaired enough Internet-based companies to be called one of the Cyber Elite by Time magazine. Right now, he maintains a dominant World of Warcraft guild, all while serving as chairman of the board at Creative Commons and on the board of directors at the Open Source Initiative. Describing what these organizations do is dicey (Jon Lebkowsky hashes it out in "Keeping It Together," p.78), but suffice it to say that Ito is fighting the good fight.

On their SXSW panel:

Justin Hall: I intend to challenge Joi to see why he plays World of Warcraft but, moreover, what he wants to make of all the time he's invested online. I think he gets obsessed with something – veganism, World of Warcraft, or video editing – and he tends to make something out of it down the line. I want to see if during the panel we can get some sense of where he sees technology and culture going based on things he's learned in World of Warcraft.

Joichi Ito: There are people who get obsessed with World of Warcraft and addicted to it just like people get addicted to going to church or working hard. When something is minor and not well-understood, people have a tendency to make it look like some sort of aberration. What happened for a long time was that gamers were stigmatized, and they didn't talk about it. People called it an addiction and escapism. Now enough people play it, and it has become an important part of our culture. ... It's kind of like telling someone who goes to church every weekend that they're being escapist. It's based on extremes, and for the people who participate in a healthy way, World of Warcraft is really much more community-oriented.

JH: I think the goal is to provide a layer of fun and community on top of normal Web surfing. I think there's a lot that games have to offer regular applications and communications. Video games are very advanced in terms of helping people communicate and socialize and group problem solve. I want to apply those aspects of gaming to Web surfing through some pretty simple role-playing game mechanics.

I'm trying to build something that would sit alongside you while you browse. If you think about how many hours a lot of people spend browsing the Web, that's kind of an intimate and broad mission. So, I'm focused on catering to people who are very advanced Web users but also providing something for new users. And I think, over the long term, that's gonna give me more than enough to do.

JH: People are participating in Second Life in very deep ways, but there are so many more people that find World of Warcraft accessible. Still, the idea that you would have a computer game that's full of other people talking is a relatively new phenomenon. The edge of the future is defined by radical user-generated content. Game designers have a huge task to figure out how to make good rules that allow people to feel like they're playing a game and still contribute to that rule-set or flow of events.

JI: The original MUD [multiuser dungeon, an early text-based game] was user-generated content; the original games were developed by users in an open system. When CompuServe started running MUD, they started to control it, and they broke it in a way. It merged with the first-person-shooter genre, and we got World of Warcraft. But I think a lot of it is really about going back and rediscovering some of the roots we have in MMORPGs [massively multiplayer online role-playing games].

JI: It's a matter of literacy. If you're used to things that are static and predictable, then you're gonna want to stick with something like an encyclopedia or academic paper. I heard that if you go through Wikipedia and the Encyclopaedia Britannica, you find approximately the same number of errors. In one case the errors are consistent because they don't change on paper. In the other case they're always moving around. In Wikipedia you can talk to it, you can ask it questions, you can put your own impressions on it. ... The same as people who enjoy buying a CD and having it on the shelf and looking at it and putting it in their CD player, smoking a joint, and listening to the whole CD. I don't go around telling them that's not how they should be listening to music. But, if you're used to having an iPod full of gigabytes of music and being with friends and able to say, "Have you heard the latest weird Bulgarian thing? I just tried mashing it up with Justin Timberlake," I just think it's a different lifestyle; I wouldn't want to judge either one as being better. I do think that stuff like Wikipedia is what's to come.

As long as you come up with a system that amplifies the good content and filters out the crap, you'll actually get really great content from amateurs. How do we look at this vast pool of talent and parse out what's really good?

On the future face of Web interface:

JH: I find 3-D interfaces really demanding as they are now. So when I launch Second Life or World of Warcraft, it takes over my computer and demands my attention. The events in World of Warcraft are in real time, and that's part of the excitement, but it's what also keeps it from being an ideal multitasking environment. You don't want to check your e-mail, finish a paper, and upload a file while your friends are waiting for you to fight a monster. I've seen a lot of projections of our future, and they involve holograms in our living rooms. For me, at the 1.0 stage that I think we're at, it's really a 2-D experience.

JI: World of Warcraft is a better real-time interface than anything else I have for managing my relationship with 300 guild members. Whether you compare it to a heads-up display in a tank or a project-management system, it's much better. I don't know if it's the interface for everything on the Internet, but it's a much better user interface than other stuff out there. Millions of kids are learning how to use it. ... Whether you like it or not, World of Warcraft and games like it continue to grow. World of Warcraft is just an incremental step forward from EverQuest and Final Fantasy. It's just one piece of this evolution of 3-D environments. Texting came from kids in Japan using pagers to talk to each other; a lot of the evolution of interfaces comes from play. The Internet and multimedia interfaces are gonna look a lot like the World of Warcraft because it's a proliferated way to interact with tons of data.

JH: What is our Internet interface about 10 years from now? It's telepathy. So, eventually, you end up there. What we do along the way isall experimentation.

Online Games: Beyond Play and Fantasy With Joi Ito and Justin Hall