Henriette Mantel and Steve Skrovan on 'An Unreasonable Man' 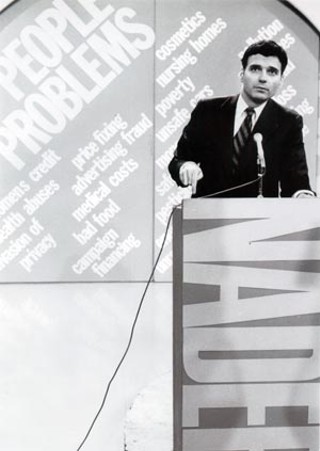 An unavoidable aspect of An Unreasonable Man is the sense the viewer gets of being subjected too soon to perspective on a prophet as plagues are still circulating. In other words, it could be argued that Ralph Nader deserved to burn a lot longer than he has.

Henriette Mantel and Steve Skrovan, who met as stand-up comedians in the Eighties, maintain that they didn't set out to rescue the lawyer, consumer activist, Public Citizen, and Green Party presidential candidate from the stake, but their documentary does just that. Comprising interviews with allies and enemies, archival footage ranging from congressional hearings to car commercials, and a biography that was often the first thing to be sacrificed as Nader's story was pushed further to the fringe in 2000 and 2004, An Unreasonable Man contextualizes someone ahead of his time within two hours amid it.

If the first line of Nader's obituary were to be that he ushered in the George W. Bush administration – I don't think it would have been, but Phil Donahue speculates such in the film – then this erases it and starts scribbling an alternate. The idea of Nader as rakish noir hero is reinforced; the tragedy of how he's been betrayed by everyone from his former Raiders ("angry and sad," is how U.S. Public Interest Research Group Executive Director Gene Karpinski describes himself) to the likes of Michael Moore and Susan Sarandon is hammered in; and his greatest hits as a Sixties and Seventies rock star are replayed for a new generation, as the filmmakers spoke to via e-mail.

Austin Chronicle: You had Nader's cooperation, but Steve mentions in his director's statement that the subject never asked for approval and insisted that you "talk to the people who oppose me."

Henriette Mantel: Ralph had nothing to do with the movie except for being interviewed and yes, upon my demand, telling me people who might have the guts to be interviewed about opposing him.

AC: Still, one marvels at the restoration of his image, ã la Al Gore's with An Inconvenient Truth. So, why did Gore make the film many would have figured Nader to, while Nader sat for what he himself would once have considered a hagiographic portrait?

Steve Skrovan: Hagiography? This isn't Bill Clinton's The Man From Hope. In the first minute of the film, we have people screaming at Ralph that he's "wicked" and should leave the country and "go ruin somebody else's." If you think Ralph's image is restored, it's not because he sat for a portrait through a soft-focused lens. We hit him over the head with a bag of rocks, and he apparently stood up to it. Based on his comments at recent screenings, Ralph agreed to cooperate because he knew that telling the history of his early years and how a bunch of young people came to Washington with no power and managed to change things might possibly inspire a new generation to do the same.

AC: Steve also emphasized how as documentary makers you decided to "ultimately let the audience judge Nader," whereas Henriette – who actually appears on camera as a former employee – assesses him "one of the greatest Americans ever" and admits that the film is for those who have "SCREAMED" at her since the 2000 election.

HM: I definitely had a different approach to making this movie. I wanted Ralph's story "out there" to inform people and yes, many of those people who yelled at me, now I can just say, "see the movie." And I don't care what they say after they see it, I just want them to be INFORMED as to Ralph's story.

AC: Has Nader seen the film? How has he responded?

HM: Ralph has evolved from being pretty silent the first time he saw it (imagine your life on the big screen in two hours, most people would be in shock) to the second time when he saw it when he said, "It made me realize how much there is to do," to the last time where he said, "I hope this inspires people to know they can make a difference in America." Of course, Ralph never says anything in those few words, but that was basically it.

AC: Have any of his major critics, to your knowledge? Perhaps The Nation's Eric Alterman, in whose words Nader is a Leninist megalomaniac who all but brought about the war in Iraq, socially destructive tax cuts, and global warming?

SS: Eric blogged about it at Sundance last year. He called it "serious and solid." Considering his antipathy for the subject, I take that as a rave. He also complained that he didn't get enough screen time to back up his points, but his ratio of interview time to screen time was the best of anyone in the film.

AC: Were those interviews naturally so charged, or did subjects like him have to build up to that sort of vitriol?

SS: Eric did not have to build up to that vitriol. He came smoking right out of the box. He was a great interview. Held nothing back. I interviewed [Columbia University professor] Todd Gitlin before Eric. I thought Gitlin was hard on Ralph, but Alterman made Gitlin look like Wilford Brimley.

AC: Have you seen such sentiment elsewhere, at festival screenings and the like?

SS: Only before people see the movie. We get a lot of resistance beforehand, but if we can get them into the theatres, they can appreciate the whole story in a larger context.

HM: Many, many people have said after a screening that they see things differently now. One man told me Saturday night that he went from anger at Ralph to ambivalence, and if he saw it one more time he might move forward into caring again. I was grateful for his honesty.

AC: Amid fascinating detours into his family and childhood and (lack of a) personal life, I found most interesting the glimpses of Nader's psychology: His "suspicious" nature, the discussion of his ego, notions of narcissism, the "organized chaos" of his office, his sense of humor, his ideas on loyalty and friendship, an underlying savantism. It provides a whole other dimension to the film, and I'm curious as to how difficult it was to undertake.

HM: Now you're making words up on me. Savantism is not in the dictionary. I assume it means being a savant, but it might be an Austin, Texas, word. As for this question, I found the ego, the humor, the office, all part of building a character in a story.

I am always fascinated by character, because I think that is what all stories come out of. And you forgot to add altruism along with narcissism. These are the questions we tried to answer to the best of our ability in the movie. Steve interviewed some therapists who had analyzed Ralph's personality, and that will be on the DVD extra. ... This part of the movie was not hard to undertake; for me, it was the most simple. Just trying to get to the root of character. I hope we did that. And if you hear anything about his personal life, please let us know: We're still digging.

SS: We found if we just told each individual story with as much honesty as possible, all of those elements would bubble up to create a complex portrait. It's subtle, because Ralph does not provide you with that E! True Hollywood Story descent into drugs and sexual promiscuity. ... We wished we could've found something like that, because that would have made it a lot easier.

AC: One thing the viewer doesn't come away with is a strong sense of why Nader abandoned the "citizenship as a profession" model he designed – and built such legislative influence with – to enter presidential politics, even taking into consideration the government-as-unsafe-car metaphor.

HM: That was pretty much explained in the movie. He wanted to be heard, and he found that he could be heard inside the political arena. And he sure was heard.

SS: I'm sorry that didn't come through for you, because we spent a lot of time on it. Nader saw that the old models were not working anymore. Congress had been co-opted, especially since the Democratic Party started going more corporate to compete with the Republicans.

He saw the consumer movement reduced to defensive actions, sticking their fingers into the dykes, spending most of their time merely trying to keep past victories from getting repealed. Very little forward motion. The agenda getting narrower and narrower. He felt that work had to be done to reform the democratic process. The two parties needed a shock from the outside, the Democrats in particular incapable of internal reform. That's why he didn't take the bribes in 2004. What good would all this money do the public interest groups if their initiatives would then hit a stonewall in Congress? I think history will show that Nader's diagnosis was correct.

AC: He's not an extremist?

SS: People thought his insistence on seatbelts and airbags was extremist at the time. Would anyone tell you that now?

AC: Did he have the equivalent of a breakdown after the failure of the Consumer Protection Agency Act's passage in 1978? Do you have a sense of that?

SS: There was no evidence of a "breakdown." There were still some victories after that, No Nukes, Airbags, Prop. 103 Insurance Initiative in California. They just were fewer and farther between.

AC: What about a sense of his plans?

SS: Ralph keeps plugging along. His new book, The Seventeen Traditions, is out, and that's something different for him. It's not policy wonky. It's a personal recollection of how his parents raised him and his siblings. It's a portrait of family values that differs from that of the right wing, which has thus far defined that sphere. The right wing model of family values is an authoritarian one. What's patriotic is doing what you are told. Ralph was raised to question authority. If you love your country, you will work to improve it, and that often means criticizing it. Like Ralph recounts in the film, one day, when he got home from school, his father asked, "What did you learn in school today, Ralph? Did you learn how to believe or did you learn how to think?" Pretty unreasonable, eh? `

An Unreasonable Man opens in Austin on Friday, Feb. 23. For a review and showtimes, see Film Listings.