As Perry proposes $20 million for incentives in budget, two major productions open up shop in Austin 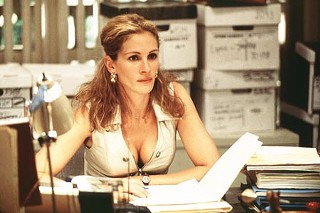 Rumors that Fireflies in the Garden, which has just opened an office in Austin, would feature an all-star cast are indeed true. Julia Roberts and Carrie-Anne Moss have signed on for the pic, according to The Hollywood Reporter. In negotiations are Ryan Reynolds and Emily Watson. The film from new German company Senator Entertainment is based loosely on the life of writer/director Dennis Lee, who won a 2003 Student Academy Award and "explores the complexities of love and commitment in a family torn apart when faced with an unexpected tragedy." Meanwhile, in the rumors-proven-correct department, CBS pilot Swingtown has also opened an office in the capital city. Plans were to shoot in early March, but a certain humongous Interactive/Film/Music event convinced them to wait until later in the month. The show, set in 1976, is about three groovy couples in Winnetka, Ill., who have differing attitudes about open marriages. The cast is reported to include Grant Show and Jack Davenport. Weather was a strong pull for the show to shoot in Austin, says Bob Hudgins, head of the Texas Film Commission. Incentives may be the main lure to keep the series here if it's picked up, which seems likely since CBS Entertainment President Nina Tassler has been talking it up with national press.

He didn't talk about it in his State of the State speech, but Gov. Rick Perry did include $20 million to fund filming incentives into his budget proposal delivered to the Legislature. The next step is for as-yet-unnamed sponsors to put forth a bill that may or may not stick with that figure (some say it's too small to compete with our neighbors in Louisiana and New Mexico) approved by the Lege in 2005 but left without a means of funding. Already filed as House Bill 374 is a separate measure that would offer state-owned properties for use by filmmakers at no charge. Stay tuned as the players and the figures shake out in the coming weeks.

Films made in Texas and/or by Texans are destined to make an impact at the South by Southwest Film Festival, which runs March 9-17. Among them is Bob Ray and Werner Campbell's Roller Derby documentary, Hell on Wheels, which has been five years in the making. Also on tap are Andrew Garrison's Third Ward, TX; Marcy Garriott's doc, Inside the Circle; Laura Dunn's environmental doc, The Unforeseen (which had a successful world premiere at the Sundance Film Festival); and Bennie Klain's doc, Weaving Worlds. Oh, you want some fiction, too? How about August Evening, Chris Eska's story of an aging undocumented worker, which shot in southern Texas? Who'd I leave out? Important note: Many of the films were made possible by Texas Filmmakers Production Fund grants from the Austin Film Society. Salute.

Teachers watch free if Turk Pipkin has anything to say about it. This Sunday middle and high school teachers can see for free his documentary, Nobelity, aimed at exploring the world's problems. Showings are at 5 and 8pm at the Arbor… "Interstate: Part I," a short by Julia Halperin and Jason Cortlund is included in the latest Journal of Short Film, a quarterly DVD of exceptional shorts… Harrison Witt's short film, "Chickenfüt," about a paranormal clucker, is slated for the San Francisco Independent Film Festival this Sunday. P.J. Raval ran the camera, and the cast includes Cyndi Williams, Jeffery Mills, Robert Tolaro, Dave Jarrott, and Charissa Allen.