Am I Having a Laugh? 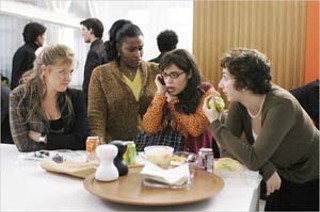 "Belinda Acosta said what about me?"

Yes, I watch Ugly Betty. It's funny. America Ferrera is charming. While immigration, to name one but perhaps the thorniest of "Latino issues," appears in Ugly Betty, crowning it a breakthrough series because of this is overblown. Immigration is never dealt with in a complicated way but as a means to get to the laugh – in this case, a C-story featuring Betty's father, Ignacio (Tony Plana), and his immigration officer, who makes a habit of getting involved with her clients. Immigration is not the focus but the unwanted advances of a woman who doesn't appear to take "no" for an answer. A classic harassment case. So far, as played on Ugly Betty, the situation is all for chuckles. I don't have anything against chuckles. I like to chuckle, preferably every day. But don't give me a bubblegum comic strip and tell me I'm experiencing high satire, farce, or even screwball comedy.

No, for Ugly Betty to be challenging and cutting-edge, I would wish for the following: to visually capture the sometimes-discombobulating sense of living and working as a cultural nomad. When Betty is at work, keep her as clownish and dowdy as she is now. When she's at home, have her look normal (i.e., her braces are clear, her clothes are age-appropriate and flattering, her hair is not so obviously a wig). Make no mention of it, no wink to the camera, or other commentary. I realize this is highly prescriptive, but aside from some astute criticism written on the subject, I have yet to see this bicultural tightrope-walking smartly addressed in a clear way on TV or film. (Ally McBeal comes close, where we saw her interior world visualized.)

Furthermore, Ugly Betty's main goal is to poke fun at the fashion industry. Betty's Latina identity is not even secondary to the series. Maybe that's the good thing – that her ethnicity is merely accepted, not doted upon. This occurred to me when watching Brothers & Sisters – which is ironic, because I have been toying with writing about how very Mexican-American the Walker family is. But back to my original point: One of the Walker brothers is gay. A recent episode had a full-on, man-on-man kiss with said brother and his lover, on ABC (owned by Disney). What? No piercing call to moral action? No hyperventilating celebration? All I could think was, "Wow." This is a long way from mincing around the subject in the past, when gay sex and affection were so obliquely suggested, they were invisible. (I'm thinking of the fluttering sheer curtains in the 1982 TV movie Making Love that stood in for the actual act.)

So, please, it's not that I don't like to have fun or that I think Ugly Betty should be better. Ugly Betty is what it is. A bit of harmless fun that is often campy, sweet, brimming with saucy zingers and some over-the-top plot twists. (Rebecca Romijn as the elder Meade son, returning as a transsexual to take over the family business? Believe me; I'm laughing.) Ugly Betty is entertaining. Let's leave it at that.

The venerable This Old House finally comes to Austin. A "green" remodel of a 1926 Hyde Park bungalow is the featured project for eight episodes starting Sunday. While there are flashier home-renovation series, after 28 years, This Old House still has staying power.

"At the end of the day, it's a drama of building a house," says This Old House producer Deborah Hood. "It's about smart builders and quality craftsmanship. In the end, I think people want to be educated about homes and how to care for them."

Another plus is that This Old House tries to "paint a full picture of the city. We don't just fly in and out," Hood said. Allen's Boots, Jo's Coffee, and the Continental Club were a few of the locations featured alongside the remodel.

This Old House airs Saturdays at 5pm on PBS.

Get Your Band On!

Public Access Community Television invites area bands to participate in EXSE (East by Southeast – the direction the PACT studio faces). Only local bands not performing at SXSW are eligible. Selected bands get 30 minutes to perform live, March 15-17, on cable Channel 16. The application deadline is Feb. 16 at 5pm. Go to PACT at 1143 Northwestern for an application, or download at www.pactaustin.org. Call 478-8600 x10 for more information.