KLRU, Beef & Pie Productions, The Austin Chronicle, and South by Southwest have teamed up for SXSW Presents, an independent film series airing Tuesdays at 9pm on Channel 18 (Time Warner Cable Channel 9). Hosted and co-produced by SXSW Film producer Matt Dentler, the third season of the series continues through February. This week's installment is Chris Elley's Barbecue: A Texas Love Story, which, when it screened at the 2004 Festival, our Nora Ankrum wrote, "Elley's documentary covers 3,350 miles of Texas barbecue stories from restaurants, cook-offs, family reunions, fundraisers, and political gatherings. Narrated by former Texas Gov. Ann Richards, it includes an all-star cast of Texan talking heads, including Liz Carpenter, Cactus Pryor, and Kinky Friedman. ... From the personal testimonials of wizened barbecue-joint patrons ('When you retire, hit the back roads. Drink you a cold beer. Come to Smitty's. Eat you some barbecue') and owners ('There's no such thing as a sick day') to the barbecue legends of LBJ's presidency, Elley and his crew's mission to leave no dirt road unexplored left them with 100-plus hours of footage. The simmered-down version we get to see includes Barbie, a spunky blond firefighter who rides the fastest lawn mower in the world and helps raise funds for her fire department through barbecues, and Double Trouble's Chris Layton, who, while on tour in New York, had Austin's Sam's on East 12th FedEx the band some authentic Texas cuisine." For more information, see Film Listings and www.klru.org or www.sxsw.com.

Tonight, Friday, Feb. 2, Texas writer/director Glen Stephens sees his Hoboken Hollow, a horror film, released in Austin at the Galaxy Highland and his River's End, a family drama, released in Fort Worth. For a review and showtimes of the former, see Film Listings. 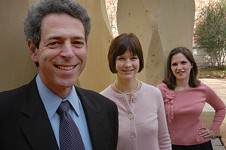