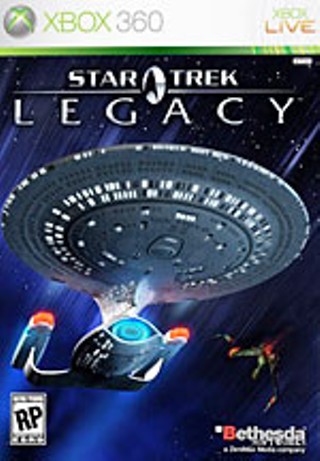 The list price for Legacy is about $60, but you can re-create the experience for $20 in three easy steps: 1) Buy 2001: A Space Odyssey, and insert it into your Xbox 360; 2) skip ahead to the scene where the spaceships float unbearably slowly across the screen; 3) push random buttons on your controller, and scream obscenities at the TV.

Legacy is the first Star Trek title to combine all five series in one storyline, but the game's creators missed the franchise's real appeal. While roughly 10% of the shows focused on space combat, 100% of Legacy is cannons, photon torpedoes, and ships flying at the speed of suck. There are no people or aliens anywhere. Sure the game features voice-work from all the series' captains and accurate ship models, but to me, Star Trek has always been about the crew beaming off the ship to explore strange new worlds. Where are the freakish and poorly designed space aliens, the red-shirted expendable crewmen, the seductive purple space chicks? Legacy ends up playing less like a virtual nerd fantasy camp and more like a buzz-kill physics teacher's interactive primer on why dogfights won't work in space. Judging by the game, a spaceship in zero gravity handles like an obese one-legged puppy. The only way to defeat the hordes of enemy ships you encounter is to build a strong fleet of computer-controlled fighters. These ships will be the ones to actually complete the mission while you drift around aimlessly at the pace of rheumatic old people screwing.

And much like creaky old-people sex, Legacy is unpleasant for everyone involved and most likely will require a lot of drugs to finish. Even if you're an incurable Star Trek junkie, and you get the urge to boldly go, you're probably better off watching a rerun of the show on cable and trying to control the crew with your mind. Or dig up an old copy of Star Trek 25th Anniversary for your PC. That gives the nerds what they want – cheesy dialogue, sexy aliens, and beaming off the damn ship.