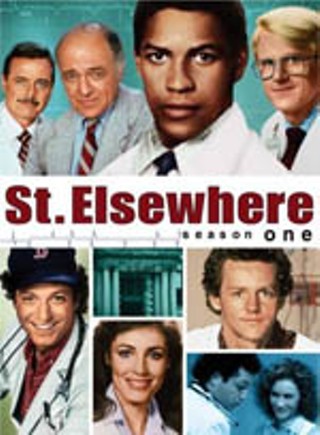 God save the luckless souls who find themselves admitted into St. Eligius Hospital, because the harried staff there probably won't. Like visitors to a Roach Motel, patients may check in, but they seldom check out. The decrepit old teaching hospital on Boston's South Side is better known as St. Elsewhere: That's where deportees from the city's more prestigious medical centers find themselves diverted. The brainchild of Joshua Brand and John Falsey (who would later conjure the equally cultish Northern Exposure), St. Elsewhere premiered in 1982, initially befuddling the curious few who tuned in: Was this a comedy series? A medical drama? A soap opera? Elsewhere's layered storylines – "arcs" in the parlance of the Eighties – were a near-flawless assemblage of diverse subgenres surgically joined together by a vision that was simultaneously bleak, humanistic, and often seriously skewed. A few savvy critics noted the show's debt to Hill Street Blues, which had premiered one year earlier. St. Elsewhere would last for six stellar seasons, growing increasingly surreal until finally imploding with one of the most controversial series finales in broadcast history, complete with a flatlining MTM cat logo. In addition to claiming one of the all-time great theme songs (the Eighties were the golden age of TV tunes), St. Elsewhere was an armchair sociologist's wet dream, brimming with hidden non sequiturs, homages to pop-culture icons (keep a keen ear open for familiar names over the hospital PA), and sly in-jokes that flew right under NBC censors' radar ("she placed her tulips on my organ"). The show's consistently low numbers (highest Nielson rating: 49) kept it hovering on the critical list, its tenuous life-support system subsidized by upscale sponsors who coveted the show's small but affluent viewership. Elsewhere's enormous ensemble cast was probably bigger than its audience, but a few standout performers quickly rose to the top: Denzel Washington's ambitious but compassionate Dr. Philip Chandler; David Morse's empathetic, tousle-haired resident, Dr. Jack Morrison; William Daniels' insufferably egotistical heart specialist without a heart, Dr. Mark Craig. Others would join on in subsequent seasons: Alfre Woodard, Mark Harmon, Bruce Greenwood. The show killed off its cast members with as much unsentimental abandon as it dispatched its often impressive roster of guest stars, which during season one included a baby-faced Tim Robbins as an unrepentant terrorist bomber and, most memorably, Doris Roberts and James Coco as a co-dependent homeless couple in the Emmy Award-winning episode "Cora and Arnie" (both included here along with 20 other episodes, an audio commentary, and several featurettes). ER? Grey's Anatomy? Scrubs? Hapless interns all, pale echoes in the hallowed but crumbling halls of St. Eligius.