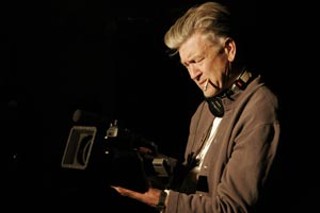 David Lynch keeps himself occupied. The world's leading avant-garde filmmaker also paints, runs his own subscription Web site, sells his own brand of David Lynch Signature Cup Coffee, and writes about Transcendental Meditation in his new book, Catching the Big Fish: Meditation, Consciousness, and Creativity. He recently camped out on the corner of La Brea and Hollywood with a live cow and a large "For Your Consideration" poster touting Laura Dern's phenomenal performance in his latest mind-bender, Inland Empire. His distribution company has taken on the daunting task of distributing his most demanding film to American theatres.

It is also his most ambitious. Shooting entirely on inexpensive Sony PD150 DV cameras allowed Lynch to create much of this dark work on the fly, without a script. As expected, the sound design and lighting are astounding; the world created is at once hypnotizing, frightening, dreamlike, funny, and disorienting. But be warned: At three hours – and with Lynch's typically sedated pacing and abandonment of any semblance of conventional narrative drama – Inland Empire is not recommended for the unadventurous.

Dern plays Nikki Grace, an actress looking for a juicy role to get her back in the public's eye. She wins a part opposite pretty boy Devon Berk (Justin Theroux) in a remake of a supposedly cursed Polish film titled On High in Blue Tomorrows, directed by Kingsley Stewart (Jeremy Irons). The original film never screened due to the murder of the two leads. This gypsy's curse does little to deter Devon and Nikki, despite an unnamed neighbor's (Grace Zabriskie) warnings of imminent doom, which she shares with a startled yet unconcerned Nikki. The two leads and their characters in On High in Blue Tomorrows blur as the film progresses, lending much confusion as to what lines are actually being crossed in Nikki's relationship with Devon and with her wealthy and suspicious husband. Dern's performance is indeed nothing short of defining. What unfolds is both as mesmerizing and disturbing as one would expect from the dark alleys and sharp turns of Lynch's mind.

Such brooding art would suggest the work of a tortured soul. This is famously not the case with Lynch. A practitioner of Transcendental Meditation for more than 30 years, he forgoes the misery and depression associated with the life of many auteurs, instead breaking twice a day – unwaveringly – to meditate and to find the "happiness within" that is obtained through the state of knowing pure consciousness. He talked about that and more via telephone from Seattle a week before his trip to Austin for Inland Empire's regional premiere.

Austin Chronicle: You've taken on distributing Inland Empire with your own company.

DL: Well, it's just starting. The film has opened in New York and Los Angeles and Boston. Then, just a few days ago, it opened in Washington, D.C. Now, tomorrow, it'll open in Seattle. ... It'll open in the cities we're visiting. And then it'll keep on opening wider and wider. With this way of distributing, there's no pressure on a sudden wide release. So we can work with fewer prints and keep moving around. Right now we're making new prints, more prints, and hope to be ... I don't know if 30 or 38 cities is the goal or how many theatres in each city. But it'll go wider and wider. And it will stay and maybe go away and maybe come back. 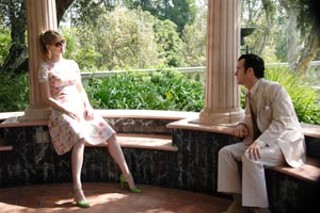 AC: Did the content or the length of the film have anything to do with your decision to distribute it yourself?

DL: Well, yes and no. Because of the site, my Web site [www.davidlynch.com], we had started distribution of Eraserhead and The Short Films. And so, lo and behold, we had a setup and a conduit to stores, and we thought, well, maybe this would work for the film. And also, I noticed that when you have a long film that no one understands, distribution companies are not racing to me and banging down my door. The advances for films are going down. So I have, in my experience, never gotten another nickel beyond my advance. And so, here we were with the thing in place, and it just seemed like the way to go.

AC: Have you had any response on your streetside campaign with you and the cow for Laura Dern's performance in Inland Empire?

DL: Well, I had lots and lots of response, and I think it did what it was supposed to do. But it didn't do it powerfully enough to get Laura a Golden Globe. ... Now the thing is that there were lots of people at the Golden Globes committee who loved Laura's performance. But it was only in one theatre in Los Angeles, and so I don't think enough of them even saw it. I think in time you'll find that Laura Dern's performance from 2006 will just get more and more and more praise.

AC: Was this role draining on her because of the content?

DL: No, not really. I'd say the reverse. Actors, like Laura Dern particularly ... her Laura Dern life is one thing, but she could go and play any character. She is so great she can play anything. And when you're successful at playing another character and getting down deep in there, it must be a thrill! Energizing.

AC: Some fans of your work might be surprised that you chose to use a standard digital video camera for Inland Empire. What would you say are the advantages and disadvantages of DV?

DL: The only disadvantage is quality. It's not for me a bad thing, because I learn to love the quality of DV when it's up-ressed and even without going to film. I like the digital projection of Inland Empire, if it's a good digital projector that you can tweak. Going to film adds another whole thing. I was so surprised at how good it looked. But the advantages are incredible. You've got a 40-minute take in the camera. That sounds OK, but why is that so good? When you're in a scene and you have to stop to reload the camera, even though these guys can load a camera so quickly, the stop and the start, a new slate goes on, the mood is broken. When you have a 40-minute take, you can stay in there, and you can go deeper in the scene, and because of that time in there – and because you can talk as you're shooting and go and go again and go again – they have way more of a chance to catch this magic and stay with it. And it's so beautiful. You've got automatic focus. That doesn't sound like much. But with a great, giant Panavision camera there's a knob on that thing that's a focus knob and somebody has to turn that. So now there's two people at the camera, and they're in the way. And you're watching the thing, and if you want to drift forward, and that's not rehearsed, so the guy's pulling focus on that drift so it doesn't blossom. ... You know, these things with digital you can drift and not worry about it. And if it buzzes and does an out-of-focus/focus buzz, sometimes those things are so beautiful to me, I can't tell you. So I just love it. It's lightweight, smaller crew, and there's not much downtime in between setups. You don't die the death. It's all real beautiful.

AC: Can you think of an occasion where you may go back to shooting on film?

DL: No! It's like ... there's so many analogies. There's no way I wanna go back and go slow as molasses in January. It's not gonna happen. I love the quality of film. Digital is getting better and better and better every second. All the focus in this world is on digital. It's coming for everybody.

AC: Can you explain what happens when a person starts practicing Transcendental Meditation?

DL: What happens is ... there's an analogy; I don't know if it's in the book. There's a saying: The world is as you are. You go from maybe having dark-green, dirty glasses; that's the world you see. You start meditating; those glasses get cleaned. Then they start turning to rose color, and then that's the world you experience. Way more appreciation of everything. Understanding of things more and more and more. And an inner happiness that can't be overshadowed by a pressurized workplace. Everything starts getting more like a great big, beautiful game. And it just happens so naturally. Stress doesn't get you anymore. It's easier to go through life.

Followed by a Q&A with David Lynch

Catching the Big Fish: A Discussion and Signing With David Lynch