Top Five Games of the Year

The top five games in a Top 10 world 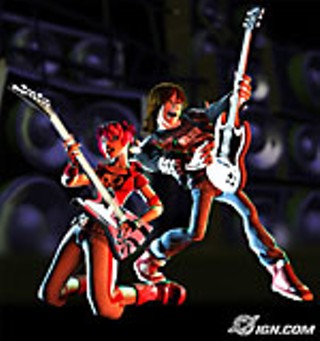 Why this above all else? Because whenever gaming came up – with family, nongamers, übergamers, etc. – people asked, "Have you played Guitar Hero II?" Following that came tales of the absurd amount of time spent thrashing and the ridiculous amounts of fun had by all involved. Extra points for recognizing Matthew Sweet's "Girlfriend" as home to one of the finest guitar solos of the Nineties.

Just for living up to half of its tremendous hype, this game is one of the best of the year. The graphics make you believe in aliens, and the game plays with a realism the historical war re-creation games have yet to master.

3) The Legend of Zelda: Twilight Princess

Unlike GameCube, the Wii actually launched with an A-list title. Plus the sweet sword-swinging action burns tons of calories, right? Please say "yes."

No dying! Why didn't I think of that? As if participating in all the integral moments from the original trilogy as a Lego figure wasn't enough, you can't die. Why stop playing?

Side-scrolling is back on the best handheld game of the year. Nintendo goes back to its roots and reminds everyone how fun it is to stomp turtles and mushrooms. – James Renovitch

You're a desperado on a mission in the Wild West, killing en masse, stealing money, and drinking whiskey all the while on horseback. No, this is not every Seventies Clint Eastwood movie you've ever seen, but it is the same gunslinger game you played as a kid on the Super NES. Hopefully, Gun II will have the option of the gunslinger turning his pistol backward and shooting himself in the face, ending his perpetual Groundhog Day life-mare.

Any sports game being a rehashed plot is unavoidable considering the context, but having every one commentated by a washed-up sportscaster is like spending every Sunday watching football with a senile old man.

What's Raven Software to do when every superhero game has been exhausted? Save some plot-writing time, and role them into one. That's like combining every boy-band together and calling it a "supergroup."

GTA's plot hasn't changed since the original; it just bounces to a new major city every edition. Why not change the setting a bit by moving it to West Texas, where you steal horse trailers and blow up meth labs?

Quake 4, Area 51, Doom, one in the same. We all love the first-person alien shooter games, but spike the punch with better graphics and game play à la Gears of War. – Carson Barker

Nothing speaks of realistic violence more than historically factual moments. The exploding body parts and rivers of blood are all made real by the World War II scenario, yet the game barely hints at the events that conjured, fueled, and ended it. But after storming with your troop through fog-scaped ruins, watching friends and foes catch strays in the face, and dancing over land mines, you won't care.

Shooting people is one thing; seeing bodies stuck to the wall by a pitchfork through the skull is quite another. Making nightmares a video reality, RE4 uses imagery like this to give a new meaning to the term "interior decorating."

The nice thing about killing in this game is that your targets aren't human, so you feel absolutely no shame in cranking up a chain saw and shredding their bodies in half.

Video-game assassination is easy when all you have to do is shoot the victim and move on to the next screen. Hitman requires the player to think outside the murder box by strangling with wires and pushing victims off tall buildings to get the job done. Having to dispose of the body afterward is not a pretty sight, either.

Most rappers declare that they started a music career to escape their gangster past lives. 50 Cent, on the other hand, indulges in his gangbanger days by making a video game based on them, in bloody, ruthless detail. – Carson Barker