Champion of the World Cinema 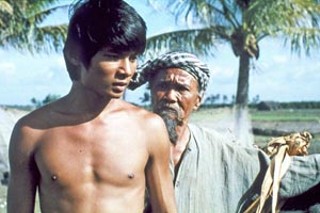 I recently had lunch with Chale Nafus, director of programming for the Austin Film Society, and I was disheartened to find out he had a much broader understanding of film history than I do. His range of knowledge extends from Howard Hawks to Chen Kaige, from Korea to Brazil, from Italian neorealism to Philippine melodrama, whereas mine tends to linger right around Howard Hawks. You could argue that it makes sense that the chief curator at a film society in a film town would know more about movies than a reporter at an alternative weekly, but it bothered me regardless.

The problem, however, is that I really liked the man. During our conversation, he was warm and intelligent and generous, making it all the more difficult for me to cultivate the bitterness that was growing inside me with each reference he made to Bollywood or obscure, untranslated Mexican cinema – references I'll probably never fully understand. Let no one ever say journalism isn't a humbling and emotionally complex profession.

Nafus comes by all this film expertise honestly. For 25 years he was a professor of film studies at Austin Community College, where he helped establish the Radio-Television-Film department. In 1985, at the request of a former student by the name of Richard Linklater, Nafus became a founding board member of the Austin Film Society, and his destiny has been tied in with the group's ever since. In 2002, after retiring from teaching, Nafus became AFS's chief curator.

Starting Jan. 9, Nafus and AFS are presenting the next program in their ongoing Essential Cinema series. South by Southeast: Films of Thailand and Vietnam will feature six Southeast Asian films over six weeks, a rare opportunity, Nafus says, for Austin audiences to experience the burgeoning yet still unfamiliar film culture of a world halfway around the world.

"It's part of my mission and the mission of the film society to introduce people to new or overlooked films," he says. "Two years ago, I hadn't seen any films from Thailand. Then I kept seeing that certain Thai films were coming to the Toronto International Film Festival. So it seemed like something important was happening." The Vietnamese film industry, though still a relative mystery to most American moviegoers, has had more international success over the years, starting with Anh Hung Tran's Oscar-nominated The Scent of Green Papaya back in 1993.

A lifelong fan and student of movies, with a particular love of global cinema, Nafus is in the enviable position of basing his curatorial decisions for the Essential Cinema series largely on his own whims and interests, deciding on a particular program first and then going about the process of trying to learn everything he can about it.

"I had used The Scent of Green Papaya in class at ACC," he says, "and I knew a little about Vietnamese film, but otherwise I was learning as I went. There's an infinite richness in Asian film, and I just keep exploring different aspects of it. We've done series on Bollywood, fifth-generation China, South Korean cinema, Japanese movies. Very often these series will be introductions for people, either to a region or a country or a culture, which is our goal. And in this case, it was an introduction for me as well."

The problem with curating a series like South by Southeast, he says, is that very often films made in countries like Vietnam and Thailand are made for people in Vietnam and Thailand, and film studios and distributors are reluctant to spend money on subtitles because they don't feel that the English-speaking market will be interested enough to justify the investment (meaning there's a whole world of cinema out there that never makes it to our theatres or gets mentioned in our magazines). Nafus often chooses up to 40 titles for a series only to find out that the majority of them have little to no distribution set up in the United States, precluding him from ever getting his hands on a print. He argues that this phenomenon speaks not only to the vitality of these countries' homegrown film industries but also to the increasing indifference many parts of the world feel toward the English-language market in general.

"Originally," he says, "I was going to try to get one film from six different countries in Southeast Asia for a sort of overview, but I couldn't find much on 35mm film with subtitles. There are just very few available films out there.

"It's like when we were doing our Bollywood series [in spring 2005]," he continues. "There was a film I wanted, but the distributor in India told me, 'We have a population of a billion, and we have the Indian diaspora. Why would we bother putting English subtitles on 35mm prints?' And I suddenly felt like I was trying to get an Albanian-subtitled film. I was stunned. We are irrelevant as an English-speaking country. If Asian filmmakers don't want to get into an international festival, they won't even bother with us."

In the end, Nafus was able to find six "high-quality, highly cinematic films that communicate more through cinematography and imagery than dialogue," films, he says, that will be a "revelation" for moviegoers. The first movie in the program, The Overture, by Ittisoontorn Vichailak (a film Nafus calls a "gentle introduction to the series"), is the story of a young Thai man struggling to succeed as a traditional musician in a rapidly modernizing society.

The Overture is followed by Vietnamese "eastern western" Buffalo Boy, the story of a young man's coming of age during a long, hard buffalo drive, a sort of Red River set in rice patties; and, then, Ekachai Uekrongtham's Beautiful Boxer, a true story about the rise of Thai boxer Nong Toom, a legend in the ring who had transgender predispositions that caused trouble in both his personal and professional lives. Nafus calls it a "fascinating gender study dealing with the contradiction of a guy who really wants to be a woman but who's involved in one of the most violent, most masculine endeavors in Asia."

On Jan. 30, the program will feature Vertical Ray of the Sun, from The Scent of Green Papaya director Anh Hung Tran, who almost single-handedly put Vietnam on the world-cinema map in 1993. In this story of three sisters coming together to honor the anniversary of their mother's death, Hung creates a film that, according to Nafus, is like a "Buddhist meditation. The camera will linger on an area of the room, like a still-life painting. The characters' lives are going on, and the filmmaker will just let us linger on a certain image. Instead of just having these actors talk and do things and let us think things about them, we get to sit in the spaces they inhabit and consider what it looks like through that window."

The series will continue on Feb. 6 with Last Life in the Universe from Thai director Pen-Ek Ratanaruang, who attended the world-renowned Pratt Institute in New York City, where he developed a strong design sensibility that informs his directorial style. And the last film showing will be 2003's Ong-Bak, a widely popular martial arts film set in the world of Thai boxing and starring Tony Jaa, a brilliant physical presence who Nafus claims is the "true inheritor of Bruce Lee's mantle. ... The story in Ong-Bak is almost irrelevant. The true beauty of the film is in watching Jaa's body move through space."

Looking at this lineup, I wonder if Nafus' aims as a curator are divided between finding great films and finding films that are most representative of their cultures and that best educate new viewers about life in Southeast Asia. In other words, is there a balance in the curatorial process between his loyalty to cinema as art and to his role as educator?

"I don't want to be didactic," he says. "I just want to show powerful, beautiful films that have to do with other people's lives in other places. I don't know if they're representative of life in those places, because I've never been to those places. I just want to get a wide and diverse range of images to as many people as I can. That's my job."

South by Southeast: Films of Thailand and Vietnam

Tuesdays at 7pm through Feb. 13