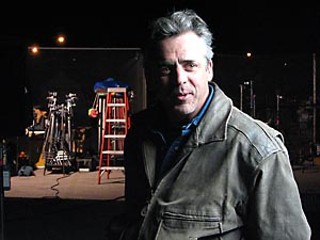 Jeff Schwan once bit a wolf. "She was only 85 percent wolf," he says, smiling his sleepy cowboy smirk. "I bit her in the ear after she bit me."

It's not surprising that Schwan bit a wolf. It is surprising that a wolf had the audacity to bite him. As one of the busiest and longest-working film and TV stunt coordinators in Austin, Schwan is a professional badass. Need someone to get hit by a car, thrown off a horse, or attacked by dogs? Call him.

His long list of credits includes stunt work on The Alamo, all three Spy Kids, Waking Life, the in-production Tarantino/Rodriguez collaboration Grindhouse, and Gary the Tennis Coach. He's currently the stunt coordinator for the Friday Night Lights TV series and even had a role in Sin City.

"My mom was so excited," Schwan recalls. "I said, 'It's not a very glamorous part,' but she said, 'Oh, Jeffrey, don't talk about your work like that.' Then I told her, 'I'm getting my head shoved in a toilet by Mickey Rourke.'"

It wasn't always getting swirlies from celebrities for Schwan. Beginning as a roper and rough bull rider in the late 1970s, Schwan fell, quite literally, into the business. After a day of cowboying outside of Bastrop, Schwan stumbled onto a movie set. The filmmakers asked him to ride his horse back and forth behind the camera to give the actor an eye-line during the take. After getting tangled in some cables, the horse reared up and fell to the ground. As always, Schwan remained in charge. "I landed on top of the horse's head, and the whole set was quiet. This young kid came up to me and said, 'Man, that was great; are you a stuntman?' What could I say? 'Yeah.' So that was my first stunt. Unpaid and behind camera."

But where to go next? In the early 1980s, Austin was hardly the moviemaking town it is today. Slacker and El Mariachi were still a decade away. What's a 21-year-old kid with a talent for falling off horses to do? Hook up with Willie Nelson, of course. After a period of working for free, Schwan landed a gig as a stunt double on the 1986 film Red Headed Stranger. With his face covered in yak hair to match the bearded actor he was doubling, Schwan waited on set for 14 hours.

"I sat there forever, all excited. Finally, at about 4 in the morning, they came to get me." The stunt involved Schwan falling backward off a horse. "After they got the shot, the crowd splits. Out walks Willie, like Moses, with a bottle of tequila. He says, 'Get Jeff a glass,' and I say, 'I don't need a glass.' That was my first official job in film."

When I visit Schwan on the set of Gary the Tennis Coach, he's attacking an actor with three rottweilers. Well, he's coordinating the stunt. And the process is anything but simple. This particular stunt involved re-envisioning the director's original plan for the shot, building a ramp, and editing together videotaped rehearsals. The actor was wary, harboring a childhood fear of dogs. But after rehearsing with the gentle and assured Schwan, the actor regained his poise. "We're cheating the angle so it only looks like the dogs hit him," Schwan explains. "But after rehearsing, the actor says, 'Just let 'em hit me,' and I'm like, 'You'll do that once, but you won't do it again.'"

So, how do you take an actor from canine-phobia to volunteering for an attack by three rottweilers? "You say, 'Everything's going to be all right. I'm right here.'" Clearly, a good stunt coordinator has to have a way with words. Schwan smiles like he's got a secret joke and drawls, "I'm just here to contribute. I love making movies."