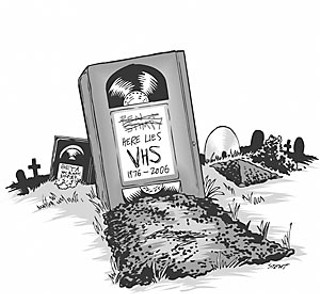 It seemed like a good move at the time. Two mystery boxes of videotapes from eBay. Take my chances and feed my desire to watch more and more movies, the good blended in with the putrid and the just plain lame.

The boxes plopped on my doorstep, and I wasn't disappointed. James Doohan starred in a murder mystery called Through Dead Eyes. The back of the box showed the man we know as Scotty from Star Trek wearing an eye patch and hoisting a pistol at the camera from where he sat in his ... La-Z-Boy? Then there was Two Small Bodies with a picture of Suzy Amis chained to the wall with Fred Ward eying her angrily (longingly?) on the cover. "Incredibly hot!" read the quote from The Village Voice. Luke Perry in a James Dean-esque T-shirt lolled against a brick wall on the cover of Terminal Bliss. "He had everything, but nothing was enough," the cover informed me. As if that weren't enough, the box was chock-full of the detritus of our modern world. From other videotapes I would learn how to babysit, all about Wayne Gretzky's banner season of 1989-90 for the Kings, how to handle menopause, and the secret to an outdated software program. Oh, there were a few real winners, too. Welcome to Hollywood, a film that compared itself to This Is Spinal Tap, was an early effort from Adam Rifkin, whose Homo Erectus from Burnt Orange Productions recently snagged a slot at Slamdance.

The tapes arrived more than a year ago, and I haven't watched a single one yet. Not one. After all, I have a Netflix subscription bringing the latest arty DVDs to my mailbox regularly. My satellite provides free pay movies for six months, just to say thanks (said the heroin pusher). Movies and television programs pile up in my TiVo unit. And the only VCR left in my home is a combo unit in the living room.

So it goes in the sad demise of the VHS tape. Last month Variety made it official by running a humorous obituary for our old friend "born 30 years ago as Vertical Helical Scan to parent JVC of Japan." This comes as no great surprise these three years since DVD took over as the dominant format, but it makes me a bit misty-eyed. DVD is just another high quality format; VHS changed everything.

In the early days, we had the battle between the superior, smaller Betamax tapes and the bulky VHS, and the tapes and machines cost so much only the true techies and the truly kinky took the leap. Of course, originally it was all about pornography, as seemingly all technological advances are. But, in 1986, the news rated a full-page feature in the local weekly newspaper when the first video rental store opened in Lockhart. I should know; I was the young punk who wrote it. This was a magical moment for introverts and cheapskates everywhere. We could watch at our own convenience, eat our own, less-expensive popcorn, make out on our comfy couches without the watchful eyes of that flashlight-wielding usher of yore. We, the viewers, were finally in charge. Movie theatres would soon disappear, we were warned. America was getting anti-social, but we knew the truth.

Be Kind and Rewind

Renting a movie to watch at home became our national ritual. The plastic-cased videocassette recorder rented for $5 or so because no one could afford $400 for the top-of-the-line, four-head, high-fidelity stereo unit. The VCR's heft was the holy grail because of limited supply, but we'd call ahead and pray that one of the blessed, weighty machines could be ours to drag out to the car like a trophy buck. The movie itself was a couple of bucks at most before evil Blockbuster swallowed the industry whole and earned its Darth Vader reputation for late fees, rewind fees, fees fees fees. The VHS was our great compromise: Comedy? ("No, Jim Carrey scares me.") Drama? ("Nothing with Michael Douglas, please.") Foreign? ("Does it have subtitles?") Chick flick? ("Never. Ever.") Behind the counter, a budding Quentin Tarantino offered suggestions, sometimes with a nasal note of condescension that let us know this mattered to him.

These spools of videotaped film were indeed something of value in the big, impersonal world. This was art in all of its imperfect beauty. We wandered the aisles of Austin shops like Vulcan Video, I Luv Video, and the Movie Store searching for the perfect committee decision. Sometimes the hunt took more than an hour, but the perfect score meant a night of insight, laughter, love, perhaps hazy drunken memories of being wrapped snuggly in a blanket and being so very alive and so very far away from the madding crowd.

Yes, DVD is still here and somewhat afloat, but it will never be what VHS was. Consider the numbers: According to industry mag Video Business, sales of all formats – this includes PlayStation Portable – totaled about $9 billion for the first three quarters of 2006. DVD sales were up a mere 2% from 2005, while VHS plummeted somewhere between 55% and 65%, for a total of about $125 million. So VHS movies today are the equivalent of 8-track tapes in 1980, when they still could be found from tape clubs but were otherwise scarce. Sometime in 2007, our old friend VHS will truly die, and the statisticians will finally ignore it. Meanwhile, DVD is a live-fast, die-young teen who doesn't know its sweet ride is almost over. Ahead we have the Blu-ray Disc vs. HD-DVD battle as the world goes thoroughly high-definition everything. Consider that the new HD discs will hold a kagillion more movie extras than DVD, and you see how much our relatively new friend is doomed. Blu-ray looks to be the early contender because of the industry giants backing it, including Sony, Dell, Panasonic, and Samsung. But who cares? We may all be downloading our films by then anyway. It's not the same.

Ask anyone who still has the entire run – so far – of The Simpsons cataloged on tape. Excuse me if I get all sentimental here. I am a conflicted guy who had an 8-track player and a CD player installed simultaneously into his 1995 Toyota Corolla and somehow remains dangerously addicted to the Internet but stubbornly out of the cell-phone market (leave me a voice mail and I receive an e-mail notice). Perhaps 8-track is, in the end, the best comparison to those videotaped movies. I think of my older, hoodlum brother tooling down the highway in his hot rod, a cigarette drooping from his lips. Led Zeppelin's "Dazed and Confused" is cranked, but the sound becomes mushy and slow. He folds a matchbook cover into quarters and shoves it under the 8-track tape, and we're cruising again.

That's how we'll talk about VHS to our children. We'll feel it more than anything. We'll do a lousy job of explaining it, and they'll coldly say we're too attached to the past. They'll be right. Film fans were educated via videotape. People fell in love watching VHS.

When my film neophyte wife and I were first dating, I held festivals to educate her on this art form that had shaped me. It was a way of sharing a part of myself with the person who had stolen my heart. I remember Dustin Hoffman day: Tootsie, The Graduate, and Little Big Man topped the bill. Marathon Man and Midnight Cowboy, tougher to digest, would have to wait until later in our relationship. We pulled pillows down onto the carpet and shoved in a big, clunky tape. The picture was jumpy, but I quickly adjusted the tracking, and we waited out the coming attractions. Upon hearing the words "And now your feature presentation," I doused the lights and handed her a glass of wine. Our fingers intertwined as Benjamin Braddock sank to the bottom of a swimming pool in despair. That was my VHS moment. Thanks for the movie memories, my old boxy friend. May you rest in peace.