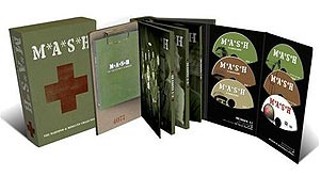 "Now hear this. Tonight's TV episode will be M*A*S*H, starring Alan Alda, featuring the madcap adventures of the wacky doctors and nurses of the 4077th as they do battle with death, dysentery, and depression on the front lines in Korea." No, that PSA never aired, but it would've provided an appropriate symmetry for the last episode of this landmark series. When M*A*S*H debuted on CBS in 1973, America was in the last gasp of the Vietnam War. Though Walter Cronkite is widely credited with turning the tide of popular opinion, M*A*S*H was the likelier cultural catharsis, gently bombarding Middle America with its anti-military pacifist bonbons week after week.

The series started off humbly enough, a quickie cash-in on Robert Altman's seminal black comedy about a group of Mobile Army Surgical Hospital doctors trying to hang onto their sanity during the Korean War. Barely noticed during its first tenuous season, by its second M*A*S*H had cracked the Nielsen Top 10. Its cinematic approach – often employing complex tracking shots, characters who actually evolved over the run of the series, and multiple storylines – still resonates more than 30 years later. M*A*S*H boasted a flawless ensemble cast supported by a bevy of behind-the-scenes surgeons who helped frame the series: Larry Gelbart, Hy Averback, Gene Reynolds, and first- and second-season director Jackie Cooper, whose Fifties medics-in-the-military dramedy Hennesey anticipated M*A*S*H by a decade. M*A*S*H's early years were its best, juggling Bilko-esque hijinks with a liberal dose of humanism. The series very nearly jumped the shark with the departure of original cast members McLean Stevenson and Wayne Rogers after the third season, and Alan Alda's increasing domination of the show's occasionally treacly direction offered more mush than M*A*S*H. But the addition of David Ogden Stiers' snooty Maj. Winchester and Harry Morgan's by-the-book Col. Potter (the less said about Mike Farrell's vanilla family man, B.J. Hunnicut, the better), revived the show's creative juices. M*A*S*H went on for a total of 11 seasons – almost four times longer than the war it was based on. This definitive set contains all 251 episodes – including touchstone episodes "Abyssinia Henry," "The Interview," and the feature-length finale, "Goodbye, Farewell & Amen," the single most-watched TV episode ever – plus two additional DVDs of bonus features including outtakes, cast interviews, a 30-year retrospective, PSAs, bloopers, and more.