on 'The Life and Death of Peoples Temple' 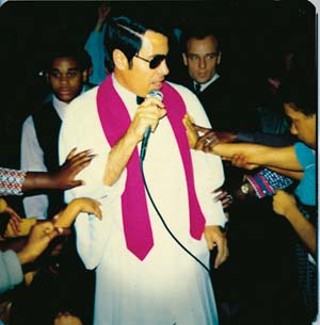 History is littered with dark events that confound the mind with their awful scope. American history has for the most part been spared the inevitable soul-searching such hellish tallies call for, but the mass suicide of 909 members of Jim Jones' Peoples Temple on Nov. 18, 1978 – via a cyanide-laced Kool-Aid knockoff – is the horrific exception to our own rule of sanity. And, until now, the cause for Jones' "act of revolutionary suicide" has remained as murky as the impenetrable Guyanan rain forest he chose as a new world for his flock.

Documentarian Stanley Nelson's new film on the subject, Jonestown: The Life and Death of Peoples Temple, manages to strip away nearly 30 years' worth of shadowy misinformation, rumors, and conspiracy theories via a series of interviews with the survivors, including Jim Jones Jr., the reverend's adopted African-American son, who was playing in a basketball tournament in the Guyanan capital of Georgetown on the day of the death of the Peoples Temple.

The Chronicle recently spoke to Jones Jr., now married with three children and working as a "medical account device sales specialist in the cardiology and surgery clinical industry in the Pacific Northwest."

Austin Chronicle: How did Stanley Nelson approach you about doing the documentary, and were you hesitant?

Jim Jones Jr.: Yes, I was. One, there had been so many slanted documentaries ranging from the far-fetched, Purple Poison, to, you know, some fairly decent ones. Two, I had felt that a lot of the film projects that I had been involved with kind of dismissed the "why?" of Jonestown. And that's what Stanley's documentary finally provides.

AC: How do you view your father after nearly 30 years? Was he evil? Misguided?

JJ: I can come up with a longer list than just "evil," but ultimately you have to look at Jim Jones as a paradox. The side of Jim Jones that I saw as a father was very different from the side that was Jim Jones, mass murderer. When you see the film, it has clips of [slain U.S. congressman] Leo Ryan giving testimony as to what he's seen in Jonestown being a phenomenal experiment. And that was just 24 hours before 909 people died.

Sometimes people don't know who I am or who my father was, and they'll make the Kool-Aid joke when they hear my name. And then six months later they find out exactly who I am, and they're feeling awful. But I think that's how our society really wants to view Jim Jones: as a crazy, madman with some crazy, mad followers. It's easy to dismiss what happened at Jonestown by putting it all in that one bucket and labeling it "crazy." What you have to do, and what Stanley's movie does, is to step back and say "Hold it for a second."

AC: The Peoples Temple had an overwhelmingly African-American congregation, right?

JJ: Right. So why were all these African-Americans following this Caucasian? He must have presented something to them to make him trust them. And I think Stanley's film shows this functional world of Jim Jones and the Peoples Temple. He gives a peek behind that particular curtain, as well as the side of Jim Jones that everyone else saw. We all know how it ended. What we haven't known is the why. And to me, this film provides that. Let me tell you this: When my wife – who I've known for 22 years and been married to for 19 years – when she watched this film, she said, "Jimmy, I finally understand Jonestown."