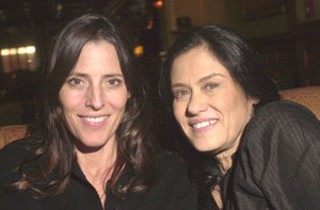 Barbara Kopple and Cecilia Peck on 'Shut Up & Sing'

Filmmakers Barbara Kopple and Cecilia Peck were Dixie Chicks fans long before lead singer Natalie Maines' shot heard round the world. Intrigued by the arc of their career in an industry known to skew conservative, they were disappointed to learn another filmmaking team was already tapped to capture content for the Chicks' Web site. However, when the tsunami swelled following Maines' remark at a London concert that she was "ashamed" of George W. Bush, Kopple and Peck couldn't let go.

"'It should be us! We should be following them!'" Kopple recalls in an interview last month when she and Peck were in town for the regional premiere of their film, Shut Up & Sing, at the Austin Film Festival. Filming the Dixie Chicks was now a considerably broader project than collecting clips for a Web site. The Academy Award-winning Kopple (Harlan County, U.S.A.; American Dream) has proved adept at giving voice to the disenfranchised, but the task of amplifying this volcanic moment in the Chicks' career was one she and Peck would have to approach with different skills.

Maines' words cast her and cohorts Martie Maguire and Emily Robison into a hellish chasm that revealed, among many other things, how fear could be covertly used to taint the truth. On the knee-jerk level, the Dixie Chicks misbehaved and had to be punished.

"In a way," Kopple says, "Natalie was the first casualty of the Iraq war."

Steady in the eye of the storm, Shut Up & Sing captures extraordinary moments of candor, frustration, and anxiety. Cynical viewers suspicious of reality TV and its continually perpetuating strains may take pause. However, capturing these intimate public and private moments was not a matter of luck or fabrication, the filmmakers say. It was inevitable.

"Their lives were in a constant uproar," says Kopple of the frank "war room" moments in the film, when the Chicks, their management, and other concerned parties were trying to manage the fallout. "We were the least important people in the room."

Shut Up & Sing looks at the blowback from the London concert even as it escalates from blistering rebuke to cold-blooded death threats. And though it uses Maines' comment as its inciting incident, the film is also an appreciation for the Dixie Chicks' success at paving their own path in country music on their own terms. But the real gift of Shut Up & Sing is its commitment to showing what it means to stand up and speak your mind when the world is bent on keeping you quiet; as one concertgoer admonishes, "Keep playing your music. ... Keep your mouth shut."

If the Dixie Chicks are to be made an example of, Shut Up & Sing suggests it should be, to paraphrase activist Maggie Kuhn, as women who continued to sing even as their voices were shaking. With this perspective, it transcends its original documentary mission to become an essential allegory for our time.

Shut Up & Sing is scheduled to open in Austin on Nov. 17.