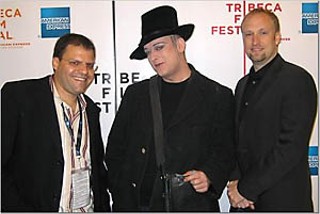 Free speech is one of the current hot topics on shows like The Daily Show, The Colbert Report, and Real Time With Bill Maher. And while those discussions are lively and full of clever and barbed swipes, the discussion is often limited in scope and perspective. That's why a surprisingly charming little film called The F Word is a welcome addition to the discussion.

Blending fiction with reality, Jed Weintrob's film places an actor (Josh Hamilton) playing a fictional radio-show host, interacting with other actors while conducting man-on-the-street interviews with nonactors (i.e., real people). The approach is not entirely new. Robert Altman's Tanner '88 series about a fictional presidential candidate, which aired on the Sundance Channel, comes to mind. Even with this precursor, The F Word is an interesting hybrid that not only comments on the subject matter at hand – what is free speech, and why is it important? – but also gives sharp consideration to how "truth" and "reality" are constructed. If you're paying attention, that is. And even if you're not, viewers must wonder at the sense of disequilibrium felt when watching the film, which Weintrob embeds with intent.

"The F Word purposely plays with the blurring line between fiction and reality, much in the same way the current administration has been blurring the line by manipulating the media over the past five years," Weintrob says in IFC press materials, citing the appearance of government-produced videos that aired on local newscasts around the country as impartial news reports. However, to Weintrob's credit, it's virtually impossible to watch The F Word passively, as it continually prods the viewer to wonder, "What am I watching?"

The fiction of the film is the story of radio talk-show host Joe Pace (Hamilton), who arrives at work knowing his hours are numbered. After accumulating a million dollars in violations, his show, The F Word, is being shuttered by the FCC. Unwilling to go out with a whimper, Pace takes his mic into the streets of New York for a live broadcast, which just happens to be the last day of the 2004 Republican National Convention held in New York. While Pace is concerned with his last hurrah in the face of an FCC crackdown, the film is concerned with what makes free speech free and how reality is constructed. Although the protests at the RNC were slightly covered in the mainstream press or described as a ruckus by a small band of kooks and outsiders, Weintrob (through Pace) encounters a diverse and passionate critical mass. Not content to settle for a leftist diatribe, Weintrob also seeks and captures the voices of Bush supporters, ex-military members – who offer opposing views of the war in Iraq – and, yes, a few goofballs.

The F Word offers a thoughtful, frightening, and sometimes whimsical study on the state of free speech in a nation where the window to that freedom is slowly being bricked shut.

The F Word premieres on the IFC Channel on Monday, Nov. 6. Check local listings for airtime.

Several locally produced programs brought home awards from the Lone Star Chapter of the National Academy of Television Arts and Sciences, otherwise known as the Emmys. The Lone Star Chapter is one of several state-based chapters that recognize excellence in TV production.

Local PBS affiliate KLRU represented Austin well, with several KLRU-carried or -produced programs receiving recognition for specific episodes or segments in their respective categories. Winners included the children's music program The Biscuit Brothers ("You've Got Style"), Texas Parks & Wildlife ("How to Be a Game Warden in Six Easy Months"), and Texas Monthly Talks. Downtown, a co-production of the Downtown Austin Alliance, Action Figure, and KLRU, was recognized for two of its feature segments: "22 to Watch" and "Arts From the Streets."

The Lone Star Emmy Awards ceremony took place in Houston on Oct. 21. For a complete list of winners, go to www.lonestaremmy.org.

The list of honorees can be found at www.pactaustin.org.

The Biscuit Brothers' Lone Star Emmy recognition is sweet, but the biscuits need some dough! Although this delightful children's music series is carried on KLRU and other PBS affiliates, they receive zero financial support from KLRU or PBS. How can you help? Take the family to the first annual Save the Biscuits benefit this Friday, Nov. 3, at the Pioneer Farms. For more information on this event, contact Laura Minnigerode at laura@biscuitbrothers.com, or call 350-2815.