When the Family Business Is the Oldest Profession in the World 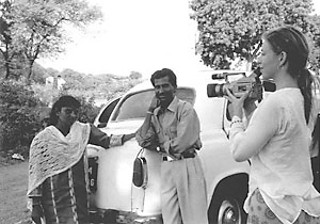 It would be tough to say which is more arresting: Mystelle Brabbée's film, Highway Courtesans, or the story behind it. The film is set in a matriarchal society – the Bachara community in central India – where families have traditionally supported themselves by setting their daughters up in the business of prostitution.

The primary customer base is now the truck-driver trade that passes through this town on a major north-south artery. Girls as young as 13, in a community reputedly descended from the palace courtesans of old and considered to be lower than the lowest untouchable caste, sit by the side of the road to attract passing truckers. When a customer pulls over, the terms of a tryst are negotiated with dad acting as pimp and it takes place on the bare floor of a one-room cottage that the family has set aside for this purpose only. (A daughter's only alternative to meeting her familial income-generating obligation would be to find a suitor willing to pay a very high dowry for the privilege of marrying her – an unlikely prospect in this reverse dowry arrangement, even in the best of economic times.)

Brabbée focuses on the story of 16-year-old Guddi, who resisted – unsuccessfully – her parents' pressure to be in the "business" but still hopes to break free by bringing in the expected income as a teacher or maybe even getting married and moving away. Following her story, we are made incidentally privy – through glimpses of the lives of the other girls in her extended family, many raising babies from an assortment of transient fathers – to what becomes of a young girl's need to nurture and be nurtured, to have a family, when her body is sold as a commodity by her parents.

The backstory to the film – Brabbée's first – might well fill a documentary text on Mistakes Not to Make. Brabbée's interest in the Bachara community was piqued by an article in the Indian magazine India Today, a cross between People and Newsweek. (The filmmaker's sole connection and fascination with things Indian came from earlier travels there and having grown up with Indians in and around ashrams in Denver and northern California.) The article, she recalls, "was a very flowery description of the Bachara community, as a matriarchal society where the eldest daughter of every family was a prostitute, but she was held in reverence and treated with affection and had a special position in the community. I had a hard time wrapping my mind around this concept, so that was the film I wanted to make. A different film than the many out there about red-light districts and sex trafficking in India."

This film, alas, would take nine years to complete, though not by choice. A weary Brabbée points out that it felt like she'd made four films during that time, adding with wry understatement, "I didn't know it at the time, but it was an ambitious first project to take on."

On the basis of this single magazine article – "this was 1995, pre-Internet, and I could find nothing else about the Bachara community" – and speaking not a word of Hindi, Brabbée booked a flight to India, grabbed her Hi8 camera, and took off ... only to be booted out by the police three days after arriving. Turns out this remote, dangerous area unfrequented by Western or Indian travelers is an opium-growing region where there thrives an unholy relationship among the drug trade, the police, and the community.

"The rumors flew about what I was doing there. Was I part of some human rights organization trying to shut things down? Everyone was protecting something, and I had to leave because I didn't have the right visa," she explains. Returning three years later with the "right" visa – a journalist's visa – brought its own perverse drawbacks: "This time the red carpet was rolled out, which meant I entered the village with a six-person police escort, despite begging them to just drop me off on the outskirts of the village. Not exactly the way I wanted to interact with the community." Certainly not conducive to her goal of creating a trusting, personal relationship with reticent subjects.

Still, she soldiered on, clinging to her original concept and focusing on one of the girls in the village who was in the business. Three trips and three years later, Brabbée sat down and edited her film and decided she hated it.

"Something didn't resonate with me in this cut," she recalls. "It felt thin, like I hadn't probed deeply enough – and I knew it wasn't done. I wanted to be done. I was tired. I'd been at this project for over three years. I wanted to move on to something new, but I couldn't."

The girl she'd originally focused on (before Guddi), who seemed so bright and shiny and eager to be in the film, had not been at all forthcoming on camera about her inner feelings, eager as she was to dance and sing for the camera Bollywood-style and even offer actual lines from Bollywood films. "The film at that first cut, felt like B-roll, shot by an outsider," explained the filmmaker, realizing to her chagrin that she needed to go back and be more open to what was going on in the Bachara community – to push beyond her preconceptions – even if it meant more trips and more years on the project.

Then there was the language barrier, or the issue of how much was lost in translation. If she knew she'd be working on this film for nine years, Brabbée says she would have learned Hindi. Not that that would have made all that much difference. The villagers spoke a dialect of Hindi unfamiliar to even the Bombay translator she'd hired. When she went back to the drawing board after chucking her first cut, the filmmaker decided to lose the male translator and hire a female translator. But language problems persisted.

"They say that a director is supposed to be in control of her film," Brabbée says. "The fact is, if you're making a film in another language, you're actually wildly out of control. I'd ask a question and could only hope that she was translating it in the same way. Someone would give a 15- minute answer, there'd be an ongoing conversation and, at the end, the translator would turn to me with a one-word answer."

Or worse, as she later discovered when reviewing the interview footage at the end of each day, the translator was asking the questions in a leading or even antagonistic way – "Don't you think it's bad that ..." – in other words, expressing her own disapproval of the girls' business.

"I went around and around with her, begging her, please, please, please leave her own judgements out of the questions, but, of course, over the years of shooting the film, the tone had already been set. You can definitely sense that with some of the questions in the film. So this, of course, complicated the editing process, trying to carve all of this away," Brabbée explains, adding that it was impossible to edit out all of the translator's attitude.

And during the long, tedious translation process and the years it took before every word had been translated, Brabbée would discover – time and again, to her horror, and, of course, much too late to do anything about it – that someone had said something really provocative that went without so much as a follow-up question, much less a different line of questioning.

Even in a perfectly translated world, there remained in this remote culture, the difficulty – often impossibility – of nailing down the facts. This was, after all, a documentary. So, what was the actual historical origin of the "business" in the Bachara community? And did the "love husband" that one of the girls waxes so romantically about on camera – as the loving, attentive father of her several babies – actually exist?

"As an outsider, you're asking many questions about their lives, and you're told different stories, often conflicting throughout the years," Brabbée says. "At the end of nine years, you just take away what feels the most truthful or what was the most commonly told story. So, that's why this was not a documentary about 'facts.' Mostly, I tried to tell Guddi's story, because facts were very hard to come by. Very hard to come by."

Happily for us all, the emotional truths revealed in the film require neither explanation nor translation.