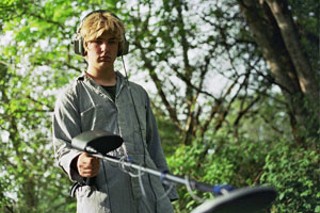 Stuck in a limbo between city and suburbia, teenage antihero Wesley (Richards) aimlessly explores his environs: a world where boredom translates to huffing, drinking, and other such vagaries. Underneath the surface, as a barely literate high school dropout, Wes' prospects seem limited. His widowed but affable father, a struggling stand-up comedian, scores high in the love and concern department but struggles as a role model for a kid distancing himself from reality. These longstanding issues remain manageable until Wes' father Frank (Leggett) offhandedly remarks, "You are walking in a sea of propaganda working on your fears and your desires." Suddenly the brightly colored signage and light posts littering the landscape take a more ominous character (thanks in part to original music by Ben McAllister), pushing matters to a head – Wes' head. Before long, the line between escapism and escape disappears. – James Renovitch