When Mike Akel and Chris Mass were laboring over their first feature, waking at dawn to write during the only shared hours the two full-time teachers could manage, they never conceived that this film, a mockumentary-style comedy about public high school teachers, would secure them an extensive festival run, a manager, an agent, and a two-picture deal at Universal Studios.

Does that really happen? Yes, it does.

The Austin-produced microbudget Chalk, which is having its Austin premiere this week at the Austin Film Festival, so impressed Universal Studios that they've put the boys to work writing and directing the first of two films to be produced by Universal. Furthermore, Chalk is currently awaiting confirmation on a theatrical and DVD distribution deal. The childhood friends took a break from their most recent trip to Los Angeles to talk to the Chronicle about the little film that could. – Toddy Burton

Austin Chronicle: It was almost a year ago that you guys started out on the film-festival circuit with Chalk, and now you're finally premiering in Austin at AFF. But the Los Angeles Film Festival seemed like a real turning point. What was that like?

Mike Akel: Well, we didn't get into Sundance. We didn't get into Tribeca. And we didn't get into South by. But we did get into L.A., which is a top-five U.S. festival. And we knew it was our chance. We went in with the attitude "This is our Sundance." Our goals were to have a good time, to pack out our screenings, meet a lot of people, and try to get some national press. Well, we packed out our first two screenings so much that they had to add another one. Then we got national press, which for acquisitions people is a stamp of approval. You get into Variety, and you're legitimate. We had all these ambitious goals, and they happened. I couldn't believe it.

Chris Mass: I remember looking at the other films in competition and thinking, whoa, this is going to be tough. There were some big stars and producers in that competition. There we were with a no-name, no-budget film with a mockumentary style. What're the chances? And then people start saying, "Your film is being talked about." I'm thinking, are you just saying that? Are you just trying to make me feel better?

AC: So how did the Universal deal come about?

CM: There was this producer at one of our screenings who gave us her card and wanted to talk. We see Larger Than Life Productions on the card and have absolutely no idea what that is. So, we Google it, and we're like, "Oh my gosh. It's Gary Ross' company." I mean, Seabiscuit, Pleasantville ... come on. So, we scheduled a meeting, and the producer said, "I really like Chalk, and we have this idea for a movie, a comedy about Little League baseball that focuses on the parents and the coaches."

AC: And you kept meeting with them? 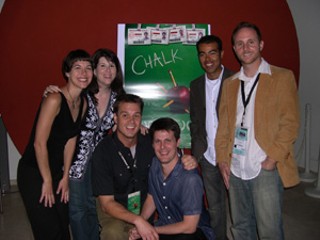 CM: We did. And the meetings went really well. But we didn't know. Are they looking at five other people? This meeting with Gary happened over two days, and at the end of it, Gary said, "I think we should do this." Some of the Universal executives walk in, and Gary says, "These guys don't have a full script. They work with a treatment." And the executive was like, "Um, okay." I could tell he was suspicious, but Gary's selling it right in front of us. After that meeting, Mike's like, "What just happened in there?" And I'm like, "Just get in the car. Let's just get in the car."

CM: I know. We recently figured out that it was six weeks from the time that we screened at the festival and the time that Universal green-lit the film.

AC: So, you're writing the film now, and then you're going to direct it?

MA: Chris and I are co-directing. And we're also co-writing with a third writer. His name is Jon Macks. He's not only a professional comedy writer, but he coached Little League for nine years. So he's like an encyclopedia of Little League.

AC: So are you guys going to abandon us in Texas and do the proverbial move to L.A.?

MA: At this point, we're open to moving to L.A., but we're not planning on it. I think we'll have two homes. One in Austin and one in L.A. Then a third in Toronto.

MA: One step at a time. We love Austin.