Belles on Her Toes 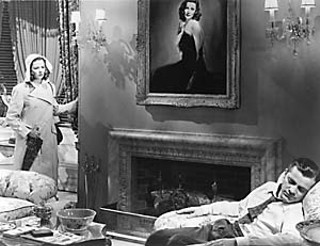 Gene Tierney and Dana Andrews in 1944's Laura. The painting was a doctored photograph.

"Will you marry me?" she pants.

"Why, you unpredictable littl-"

Hawkeye (missing the scene): What, what, what, what?
Henry: Cornel Wilde just kissed Gene Tierney.
Hawkeye: On the teeth?
Trapper: Right smack on.
Hawkeye: If he straightens out that overbite, I'll kill him. 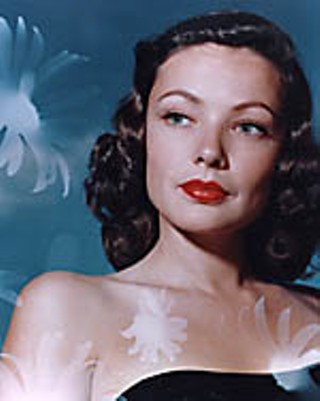 Tierney's dentist wouldn't have taken it lying down either; it was in her contract: Hands off the grill. Don't deflate those apple cheeks, pressed up against Dana Andrews' chest this time, decades later, in a used laser-disc bin: Laura. "Quintessential film noir," directed by Otto Preminger? My, my, my, said the spider to the fly.

Iconic clinch, it steamed up my living room for a year, maybe two, waiting for movie rain. The Austin Film Society got there first; Downtown at the Alamo Drafthouse, Hawk and Trap slumped down in their seats.

"I shall never forget the weekend Laura died. ..."

No one forgets a buckshot face lift. Afterward, at home, on late nights of work and distraction, Laura's payoff plays over and over, a sequence that 20th Century Fox's Darryl F. Zanuck wanted to gut. David Raksin, who wrote the film's theme while contemplating a "Dear John" note from his soon-to-be ex-wife, heard himself protest. If you cut that scene, nobody will understand that the detective is in love with the dead girl, her painting. On one of two Laura DVD commentaries, Raksin reruns the screening.

"Zanuck, who had never seen me before because I had never been to one of those meetings, turned to his cutter and said, 'Who's that?' 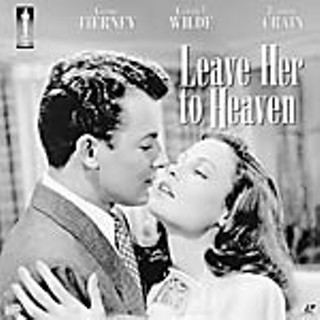 The guy who brought in Johnny Mercer's lyric and transformed "Laura" into a No. 1 pop standard. "Laura, she's the face in the misty light – the footsteps that you hear down the hall." Six years later, 1950, in Preminger's desperate Where the Sidewalk Ends, Tierney and Andrews more or less reprise their career-defining roles, even as the 30-year-old actress stumbled toward electroshock therapy and her iron-jawed leading man began peeling his grimace off a bottle. End of the line for Laura Hunt and Mark McPherson.

Biography's "Gene Tierney: A Shattered Portrait," also on Laura, colors in a bleaker Dorian Gray. Discovered at 17 on the Warner Bros. lot during a guided tour, she eloped against her parents' wishes with a young Paramount clothier named Oleg Cassini and had a daughter on the heels of Ernst Lubitsch's melancholic merriment Heaven Can Wait. A year later, as Laura was being hatched, the in utero effects of rubella surfaced, the pregnant starlet exposed at a publicity function on an Army base in Kansas where Cassini was training for war. Tierney's heartbreaking account of later being approached by a young female Marine with an unknowing fan's confession ("I broke quarantine to come meet the stars") tear-stains a page of 1979's Self-Portrait.

"There was a wonderful girl that was battered by destiny," laments Cassini, who died this March, in Biography. "It appeared that everything had been given to her, and suddenly, at a certain moment in her life, luck ended. She was the unluckiest lucky girl in the world."

In The Razor's Edge, Tierney's Isabel Bradley has everything a wealthy beauty expects, save for Tyrone Power. Although Biography and Self-Portrait ultimately assign their subject's mental deterioration to Daria Cassini's retardation, both also intimate that Tierney's romantic failings undercut her storybook existence even if Oleg stayed close until her 1991 death in Houston. After a young JFK swept Tierney off her crystal footwear, Cassini attired Jacqueline Kennedy. When Howard Hughes courted his on-again off-again spouse, Cassini ambushed him with a two-by-four. As Prince Aly Khan sharpened the real razor's edge with Tierney riding shotgun, Cassini remained a count. Tierney's inability to reconcile her lifestyle with the fact that fame had led indirectly to Daria's birth defect likely did her in. Between 1955's The Left Hand of God and Tierney's final big-screen bow in 1964, the luckiest girl in the world lost her most precious possession: her mind.

Joseph L. Mankiewicz's The Ghost and Mrs. Muir (1947) pales next to the quartet of writing/directing Oscars that followed for his A Letter to Three Wives and All About Eve, but incandescence suited Tierney like few other mortals. Breaking her foot on the eve of production, the widow Muir's benefactor channels the story's unrequited love through her own palpable ache and personal burden, Bernard Herrmann's epic score voicing character development virtually unmatched in the cinematic canon. Set stills preserved on the bonus-laden DVD scare up no less haunting, particularly one candid of Tierney and her mother, Belle, who nearly eclipses her daughter's glow. The acorn never falls far from the tree.

In stark contrast to her midperiod mystery and latter heroines in distress, Tierney's early effervescence enchants with a buoyancy verging on weightlessness. Until John Ford's Tobacco Road finally reaches rental status, Technicolor trifles like Tierney's squeaky debut opposite Henry Fonda in The Return of Frank James; plus Belle Starr, Sundown, and recent rollout Thunder Birds all titter with her precious innocence. Post-Muir worthies The Mating Season, On the Riviera, and The Secret of Convict Lake deserve issuance, but 1942's Rings on Her Fingers begs release. Minted by Laura's first director, Rouben Mamoulian, Fonda and Tierney take Preston Sturges' The Lady Eve for another grift.

"You know, it's funny," sighs Tierney's shopgirl, coveting a Park Avenue dress, "all the things you want and can't have. There goes pink champagne. I'd give my right arm to stow away in one of those things and go places. With those rhinestone slippers, and an emerald butterfly in my hair, and the most gorgeous rings on my fingers."

M*A*S*H taught me plenty in my youth. Some lessons, such as Leave Her to Heaven, took 20 years to register, but the result is an Austin Film Society retrospective. It's like waking up in an armchair and finding Gene Tierney, standing there.